Space in the Seventies: Shuttle-Landsat? A Tantalizing What-If 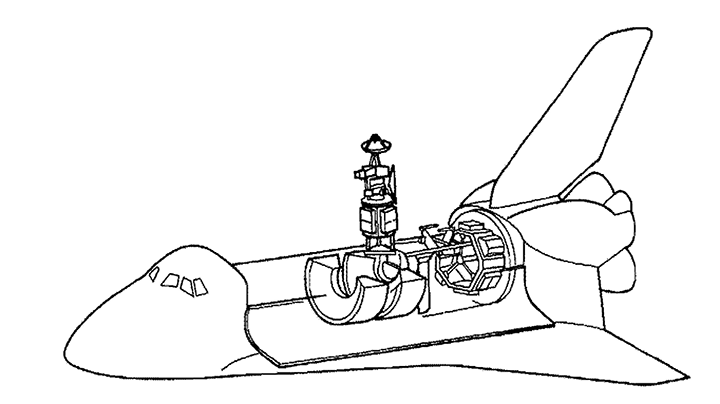 The year 1972 marked the beginning of a transitional period for NASA. The Apollo lunar missions ended, while the Space Shuttle – touted as part airplane, part cargo truck, and the embodiment of a nation’s collective spaceflight dreams – was just being developed. Skylab was readied for its 1973 launch, while a second Skylab was consigned to the Smithsonian National Air and Space Museum thanks to the budget cuts that scuttled any hopes of an extended Apollo program.

Amid all this, on July 23, the first Earth Resources Technology Satellite (ERTS) was launched by a Delta rocket out of hilly Vandenberg Air Force Base in California. This satellite program would be renamed Landsat in 1975. While ERTS-A, aka Landsat 1, was decommissioned in 1978, the program remains ongoing. Landsat at age 50 remains hard to popularize within the space community. “Multispectral scanner” doesn’t carry the same excitement and drama that “translunar injection” does. It is a truly “down-to-Earth” program that prioritizes the practical imagery of Earth’s resources over the glitz and glamour associated with human spaceflight.

But during one brief, shining moment, Landsat crossed paths with the airplane-spaceship-cargo vessel approved the same year the first of its kind was launched. While this story originated in 1972, here’s a brief history of how the Space Shuttle was bandied about as a potential solution to rescue the ailing Landsat 4 during the mid-1980s.

A Capsule History of the Early Landsat Program

The first three Landsat satellites were nearly identical and utilized the Nimbus weather satellite program bus. However, Landsat 4, built by GE Astro Space, represented a massive departure from the previous Landsats. For one, it used a Multimission Modular Spacecraft (MMS) bus, which optimized it for Space Shuttle servicing missions, and allowed for it to be recovered in space and returned to Earth for repairs. 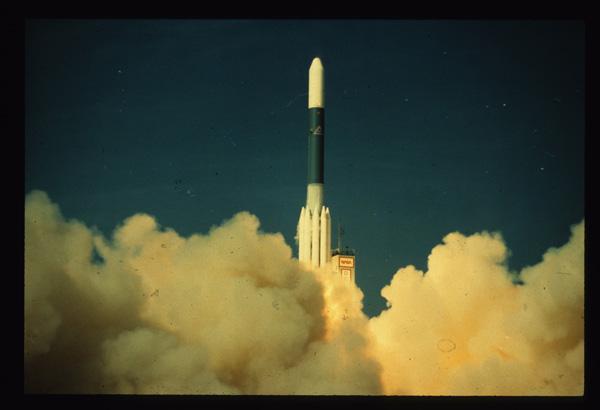 “Landsat 4 was launched from Vandenberg Air Force Base in California on July 16, 1982 on a Delta 3920 rocket.” Photo Credit: EROS History Project/USGS

According to a NASA/JPL article by Laura Rocchio, “The Landsat 4 spacecraft was a custom-designed platform and not a re-purposed Nimbus weather satellite platform used for the first three Landsats. But the mission requirements were many—the satellite was required to be Space Shuttle rendezvous ready (for the concept of Shuttle-based repairs); to carry a large antenna (at the end of a long 12.5 foot boom) for communicating with NASA’s Tracking and Data Relay Satellite System (TDRSS); and to carry a GPS receiver.”

Landsat 4 was also outfitted with a new Thematic Mapper, described by Rocchio as “a more advanced version of the MSS [Multispectral Scanner].” The new Landsat design also allowed it to fly in a lower orbit than its predecessors. At the time of its launch on July 16, 1982, it was considered the most advanced Earth remote sensing satellite of its era. Like all Landsats, it was launched into a near-polar Sun-synchronous orbit from Vandenberg Air Force Base; this north-to-south orbit allowed the satellite to survey and image the same section of Earth roughly every two weeks. However, within months, Landsat 4 began to experience power problems and was forced to curtail its science operations. These issues prompted the expedited launch of its successor, Landsat 5 (which deserves its own blog post entirely), in March 1984.

The first satellite to utilize the MMS bus was the Solar Maximum Mission, launched in February 1980. This satellite, which suffered a loss of attitude control less than a year after its launch, was famously rescued and repaired during April 1984’s STS-41C Shuttle Challenger mission, which was chronicled in the IMAX film The Dream Is Alive. Imagine astronaut “Pinky” Nelson sauntering up to Landsat 4 via a Manned Maneuvering Unit, having passed over the Earth’s poles, and that’s what NASA envisioned for one of its mid-1980s Shuttle flights.

A Space Shuttle payload flight manifest published by NASA on April 14, 1982 lists STS-2V as part of its proposed summer 1986 missions, specifically to fly during June 1986. Its remarks on page 11 read: “Shuttle launch from Vandenberg to retrieve a Landsat satellite.” This is a tantalizing what-if, given that Landsat 4 hadn’t even been launched; thus, it hadn’t even experienced the problems that plagued it throughout 1983. While the manifest doesn’t mention Landsat 4 specifically, the spacecraft’s MMS bus allowed it to be serviced or returned to Earth.

The Landsat 4 Wikipedia article muddies the waters further, stating, “The Space Shuttle orbiter Discovery was scheduled to launch on 15 June 1986 for a three-day mission to capture Landsat 4 for return to earth (designated STS-2V). The following year, the mission was rescheduled to launch on 1 April 1986. Later on, the idea to retrieve Landsat 4 was first replaced by a servicing mission in early 1987, before any mention of it was removed from the flight manifest published in June 1985.” No references are attached to this section of the article, so I’m unsure of its veracity.

Perhaps this 1982 addition to the flight manifest was to show that NASA’s Space Shuttle possessed the capability to fly from Vandenberg, with its SLC-6 being optimized for those launches. By 1986, the Space Shuttle program was being prepared to take on various tasks that it hadn’t done previously. Two Shuttle-Centaur flights, meant to propel space probes Galileo and Ulysses to Jupiter and the Sun respectively, were planned to launch within five days of each other in May 1986. July 1986 was supposed to usher in the era of Shuttle flights from Vandenberg, as STS-62A was scheduled to launch a classified payload (spoiler: it’s Teal Ruby) into polar orbit. So, it’s natural that the Shuttle program, going from (possibly unsafe, ill-advised, and terrifying) strength to strength, would have lofty plans for further polar or near-polar Vandenberg missions during the early-to-mid 1980s.

But all these plans were stopped in their tracks on the cold Florida morning of January 28, 1986, when Challenger disintegrated 72 seconds into the twenty-fifth Shuttle mission, killing its crew of seven. The Shuttle-Centaur missions were canceled; Galileo and Ulysses would eventually be deployed from the Shuttle but would utilize less risky Inertial Upper Stages and Payload Assist Modules to begin their treks into the Solar System. Teal Ruby would never fly and now sits in Dayton, Ohio’s National Museum of the United States Air Force. No Shuttles would launch from Vandenberg. To this day, no human-helmed spacecraft has launched into a polar or near-polar Earth orbit.

Landsat 4 was eventually able to return science data until 1993, thanks to the first Tracking and Data Relay Satellite coming online; it was decommissioned in 2001. Even though it didn’t get a Space Shuttle rendezvous, the Landsat program remains perhaps the best example of multi-agency, multinational cooperation in spaceflight, save for the International Space Station. And it showed us what we looked like, in sometimes heartbreaking, disturbing detail. To quote the poet T.S. Eliot, “We shall not cease from exploration / And the end of all our exploring / Will be to arrive where we started / And know the place for the first time.”

Thanks to Michael Mackowski for helping me with the research for this article.