Space in the Seventies: Skylab’s Other Astronomy Experiments 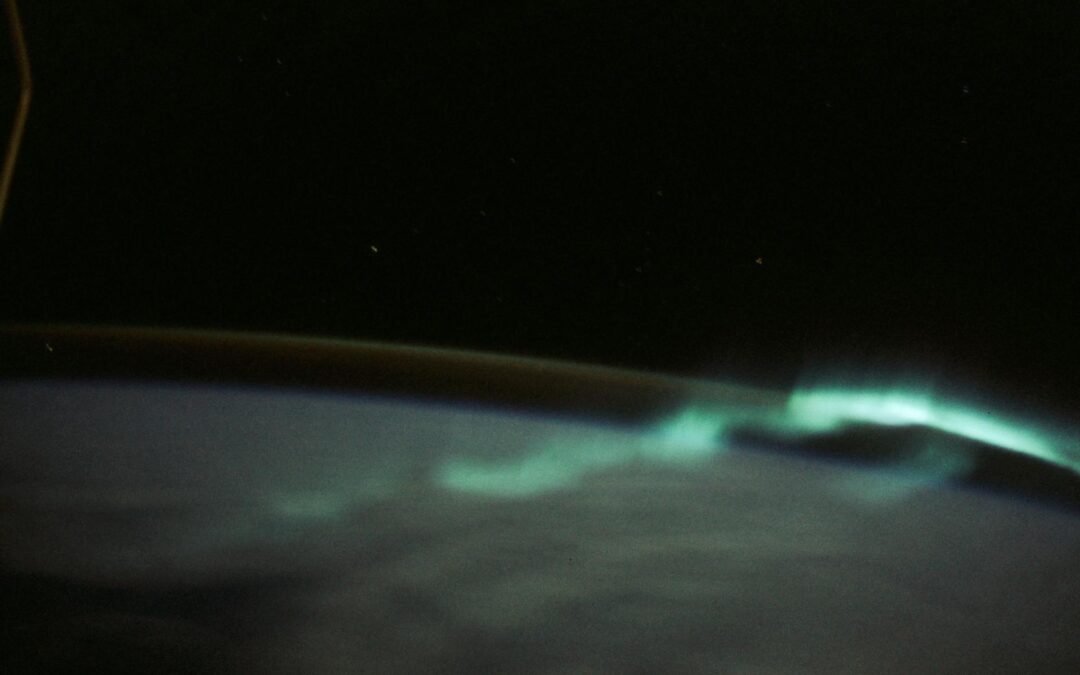 Most space enthusiasts are familiar with Skylab’s studies of the Sun, and its Christmas 1973 encounter with Comet Kohoutek. But many aren’t familiar with its suite of other astronomy experiments. Skylab possessed three ultraviolet-wavelength experiments to provide a better look into the Solar System and Universe, and also an X-ray experiment. The ultraviolet experiments imaged the Large and Small Magellanic Cloud, faint star clusters, the Gum Nebula, the Pleiades, and the star field and nebula around Eta Carinae, among other celestial objects.

Because of the launch injuries Skylab suffered during its perilous ascent on May 14, 1973, NASA had to make what the space agency called “special accommodations” for the space station’s astronomy and space science experiments. According to the NASA publication SP-404 Skylab’s Astronomy and Space Science, “Two small airlocks were installed through Skylab’s workshop wall, one on the side facing the Sun and one pointed in the opposite direction. They provided direct access to space and eliminated the need to depressurize the workshop. Each instrument using an airlock was first sealed to the inner port of the airlock, which was then evacuated and the outer port opened to space. When instruments were not occupying an airlock, a quartz window for specialized photography or a metal plate was installed.”

Because Skylab’s micrometeroid shield was torn off during ascent and internal temperatures within the orbital workshop soared, the solar airlock had to be used for replacement parasol deployment. Again, from SP-404: “The workshop cooled down, but the airlock was blocked from further use in scientific experiments. Some instruments that would have used it were redesigned for spacewalks during later visits; others were used in the remaining (antisolar) airlock.” The antisolar airlock contained a vacuum hose to be used for equipment depressurization, and an elliptical mirror for the space station’s ultraviolet observations that could be re-positioned: “It was…extended beyond the spacecraft wall where it could be tilted ±15° and rotated through 360° to scan the sky. Because of this maneuverability, instruments pointed at the mirror from inside Skylab could view a selected target on the celestial sphere without having to move the entire space station.” An antisolar airlock can be viewed within the Skylab 1G trainer, which is on display at Space Center Houston. 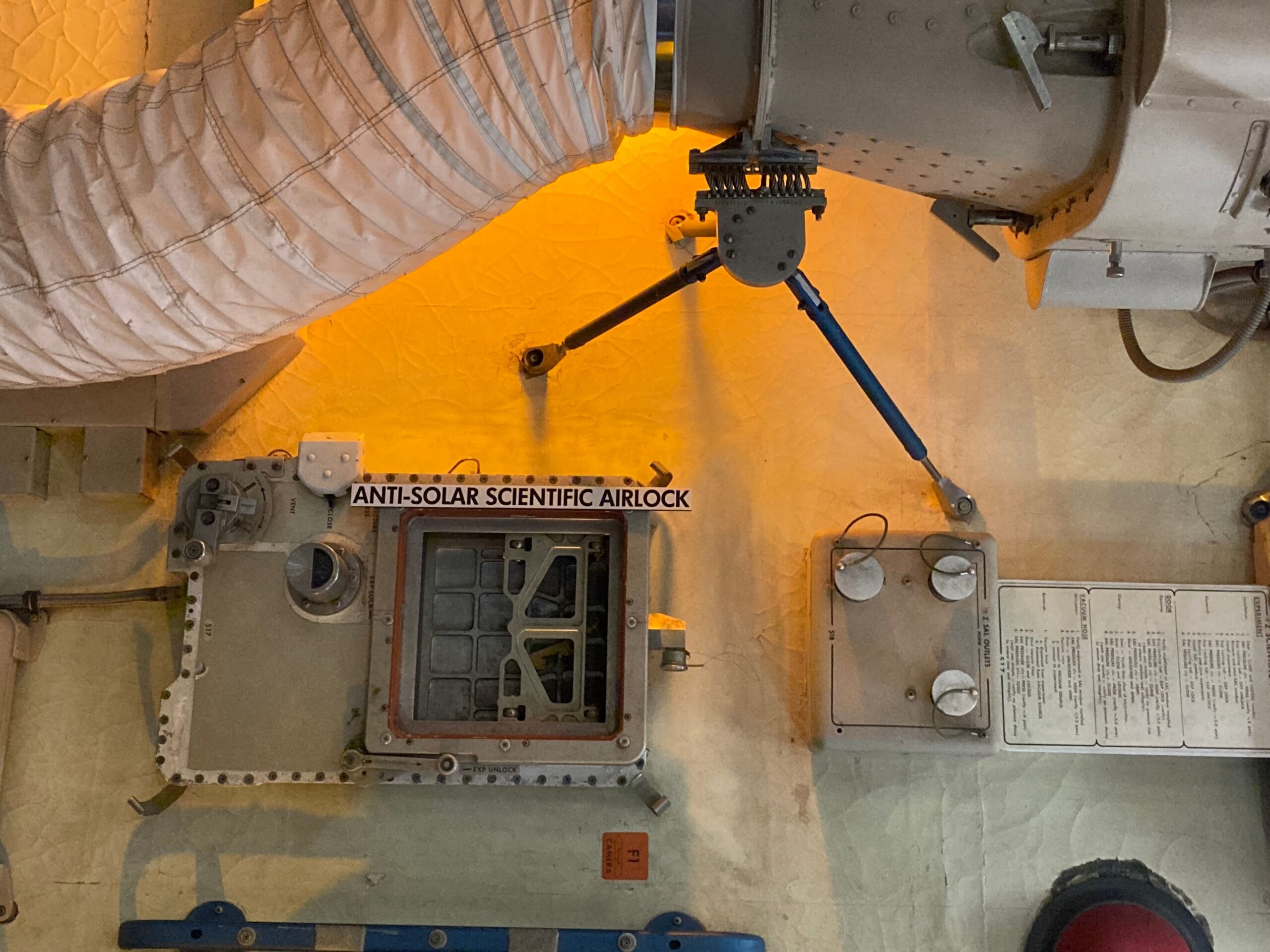 The NASA publication emphasized that the features of the antisolar airlock and the flexibility of having “multiple-use” equipment prevented the Skylab program from losing too many experiments despite the space station’s near-crippling problems after its launch. For their time, Skylab’s suite of ultraviolet experiments were innovative, and included the following:

Ultraviolet Stellar Astronomy Experiment (S019): “The S019 ultraviolet stellar astronomy experiment was designed by astronaut Karl S. Henize while an astronomer at Northwestern University to survey the ultraviolet spectra of a much larger number of stars than had been possible in earlier similar programs. It was able to reach somewhat dimmer stars than could the Orbiting Astronomical Observatories launched in the 1960s and early 1970s, and therefore could contribute a broader statistical base for the interpretation of these spectra. The experiment was operated during all three Skylab missions and photographed spectra in a total of 188 star fields.

“These fields cover an area in the sky of approximately 3660 square degrees and include roughly 24 percent of a 30°-wide band centered on Gould’s belt, a band around the sky in which the brighter stars concentrate. Nearly 1600 stars photographed by Skylab have measurable brightnesses at wavelengths of 2000 Å or less. Of these, 400 show useful data at 1500 Å or less, and about 170 show easily measurable absorption lines. Before Skylab, only about 30 spectra below 1500 Å had been obtained, with sounding rockets…The S019 ultraviolet stellar astronomy experiment used a 15-cm-aperture telescope converted into an objective-prism spectrograph by placing a prism of calcium fluoride in front of it.” A film retrieved via ESA’s website discusses this little-remembered Skylab experiment. 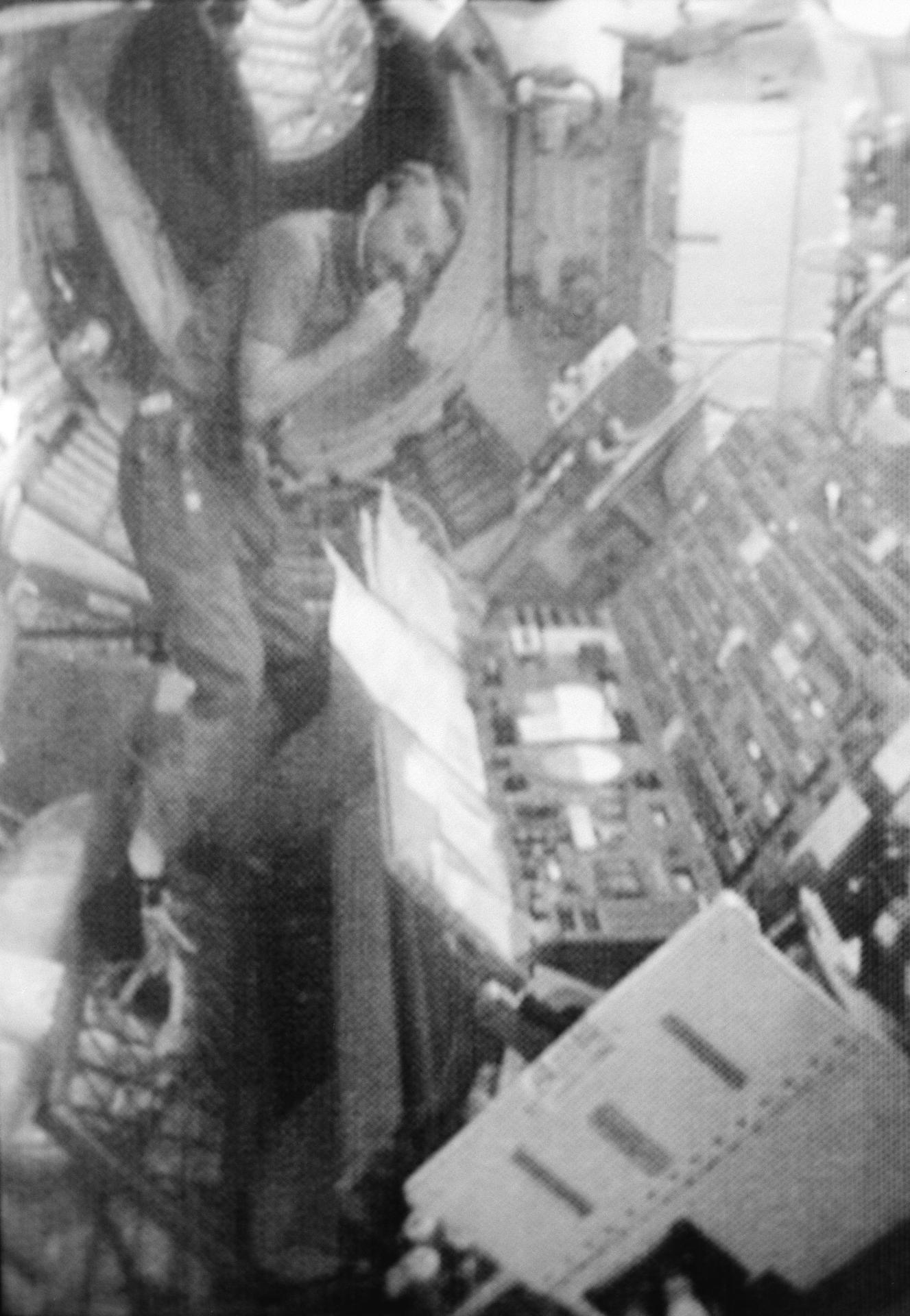 The S201 Far-Ultraviolet Electrographic Camera: “The S201 far-ultraviolet electrographic camera was sent aloft on the last Skylab manned mission, primarily to observe Comet Kohoutek. This camera was designed to take pictures in the far ultraviolet, including the region of the very strong Lyman-alpha line of hydrogen at 1216 Å. It was used during the Apollo 16 mission for both stellar and extragalactic photography from the Moon as well as for photographing the ultraviolet emissions of the Earth’s upper atmosphere. The principal investigator for the Skylab experiment was Thornton Page, of the U.S. Naval Research Laboratory in Washington, D.C. The electrographic camera was designed by George Carruthers, of the U.S. Naval Research Laboratory, to produce extremely sensitive photographs in ultraviolet wavelengths. It combines the light-gathering power of a telescope, the sensitivity of a photomultiplier tube, and the cumulative recording feature of film. It is therefore able to obtain wide-field pictures containing far-ultraviolet images of dim stellar sources.” Two reconstructed back-up units of this camera were transferred to Washington, D.C.’s Smithsonian National Air and Space Museum from Houston’s Johnson Space Center in 1981. 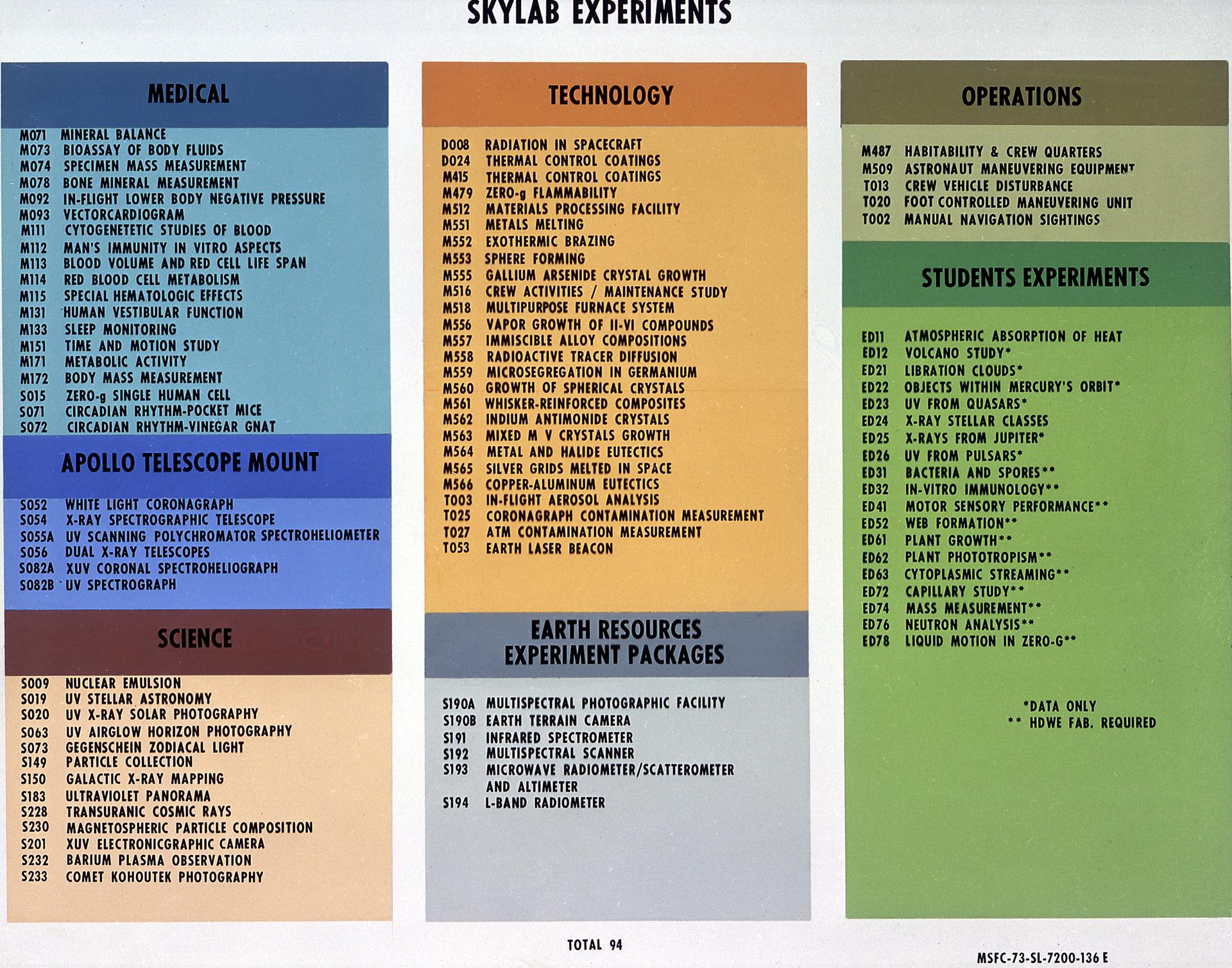 NASA MSFC image, 1973: “This chart lists the various experiments that flew on Skylab, along with their assigned numerical designations. The Marshall Space Flight Center had program management responsibility for the development of Skylab hardware and experiments.”

The S183 Ultraviolet Panorama Experiment: “The S183 ultraviolet panorama experiment was conceived by Georges Courtes and his colleagues at the Laboratoire d’Astronomie Spatiale in Marseilles, France. It was based on previous experiments with sounding rockets. The objective was to obtain ultraviolet intensities, at three wavelengths, of hot stars, clusters of stars, large stellar clouds in the Milky Way, and nuclei of other galaxies. Data in two wavelength regions centered on 1878 and 2970 Å were recorded with high accuracy on glass plates by a photographic photometer. Data for the band centered on 2574 Å were recorded by direct, wide-field imaging with a 16-mm camera also used in Skylab for other experiments. The camera viewed the same area of the celestial sphere (with a slight offset) as the photometer.” These instruments, according to NASA, were mounted in the same housing to be used within the antisolar airlock.

Galactic X-Ray Mapping Experiment, The S150 X-Ray Instrument: While not an ultraviolet experiment, little was known about the emission of “soft” X-rays from beyond the Sun prior to Skylab. According to NASA: “The S150 galactic soft X-ray experiment was designed by William Kraushaar, Alan Gunner, and their colleagues at the University of Wisconsin for the difficult 40- to 100-Å band. An important objective was to extend the search for the origin of galactic X-rays beyond the sensitivity possible with short flights of small research rockets, by placing a large-area soft-X-ray detector in orbit to collect data for a much longer time.” According to the SP-404 text, the results of this experiment were largely inconclusive.

It bears mentioning that some astronomy-centered student experiments were also flown on Skylab, and are covered in the NASA publication SP-401, Skylab, Classroom in Space. Skylab also observed Earth’s atmosphere and its aurorae around the North and South Poles, as it orbited the Earth every 93 minutes. And obviously there were observations of the Earth made by Skylab’s EREP battery of cameras, which would aid in land resource management, and would augment the nascent Landsat program. (And there was also Kohoutek, and the observations of the Sun, etc., but these are stories for another time.)

A better explanation of these stellar and galactic astronomy experiments and their findings can be found by reading the entire text of SP-404; a list of these experiments can be found in the publication’s appendix. While the Hubble Space Telescope, which is closing in on 32 years of operation, undoubtedly uncovered many mysteries of the Universe utilizing the ultraviolet spectrum, Skylab functioned as one of the first UV galactic observatories as far back as the early 1970s. The United States’ first space station provided a glimpse into the Solar System and Universe that previously could only be supplied, in a limited capacity, via sounding rockets or less powerful orbiting observatories. For that alone, it should be remembered.

Featured Photo Credit: “SL3-130-3130 (July-September 1973) — An excellent view of the southern aurora, luminous bands or streamer of light, in the Southern Hemisphere, as photographed from the Skylab space station in Earth orbit. The space station was moving into the sunlight when this picture was taken. This view is near the edge of the aurora cap. The surface of the Earth is in the foreground. The permanent aurora over the South Pole is in the background. Scientist-astronaut Owen K. Garriott, Skylab 3 science pilot, took this photograph with a hand-held 35mm Nikon camera, with a four-second exposure at f/1.2, using high-speed Ektacrome film. Because auroras are caused by solar activity, they occur at the same time in the Northern and Southern hemispheres. Photo credit: NASA”