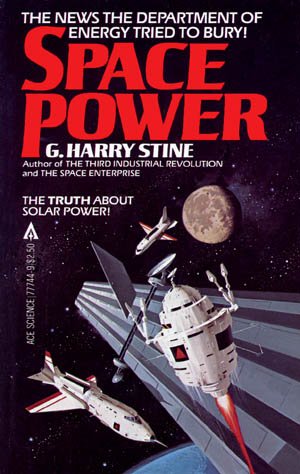 The above chapters constitute a self-contained treatise on space solar power. Chapters 8-16, not included here, deal with military space power in the context of the Cold War. This book is out of print but copies are usually available from Amazon.com

Aerospace writer and rocket expert G. Harry Stine (1928-1997) is probably best known as the father of model rocketry. He founded the National Association of Rocketry and authored the definitive Handbook of Model Rocketry. His many books on rocketry and space include Halfway to Anywhere (1996), The Space Enterprise (1980), and The Third Industrial Revolution (1975). He was a participant in the Department of Energy Satellite Power System Concept Development and Evaluation Program about which he writes in this book.