Space Settlement on the Fast Track 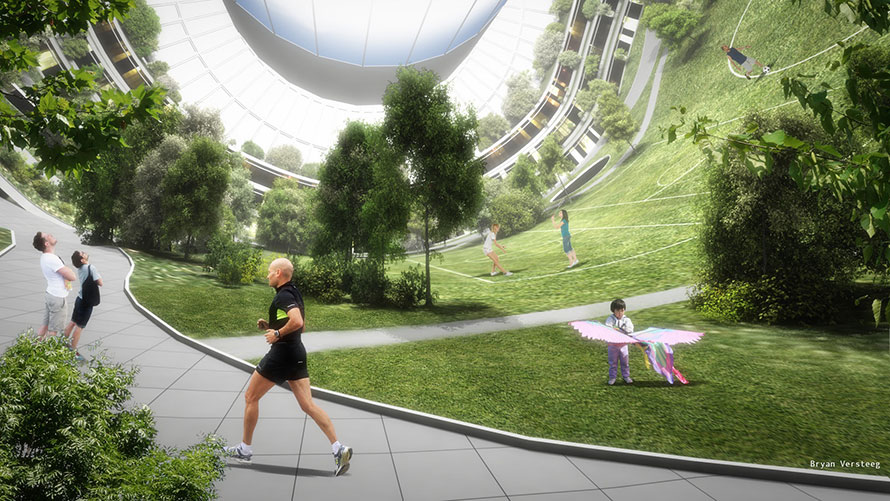 By Al Globus
NSS Board of Directors

Here’s an intriguing approach to an early free-space settlement. These settlements rotate to produce artificial gravity so the kids will grow up with strong bones and muscles. Launch cost is the most vexing problem for building such settlements. Maybe not for long though.

In May of 2020 Wccftech.com published “SpaceX Could Bring Starship Launch Costs Down To $10/kg Believes Musk” by Ramish Zafar based on speculation by Elon Musk and others. While this seems extreme, SpaceX is certainly one of the premier rocket companies of our time, so perhaps we should at least listen respectfully and think of what this might imply.

In 2017 a group of us published a technical paper called “Space Settlement: An Easier Way.” This shows how careful placement of rotating space settlements in Equatorial Low Earth Orbit (ELEO, from 500 to 700 km up) would require only a launcher for transportation. More important, these settlements would require little or no radiation shielding as ELEO has low radiation levels by space standards (according to calculations done with Oltaris, which is NASA’s web front end to sophisticated radiation codes). Not needing much shielding radically reduces system mass. Mass and system size can be further reduced, compared to common settlement designs, by rotating fast, up to four rpm. People typically adapt to this rotation rate in a few hours or days–a bit of a problem for tourists, but not a major issue for residents.

According to the paper, a small settlement of 500 settlers would require roughly 17 tons/person for materials. Using optimistic estimates of precursors of the SpaceX StarShip, transportation cost would be about $70/kg for materials and $100,000 per settler. This implies that the cost to transport one settler and their share of materials would be about $1.3 million. A lot but not out of the question. Now plug in $10/kg. You get $270,000 per settler. Now we’re talking!

However, this is just transportation cost. Assuming materials and construction are roughly the same as transportation (a big if), then the cost to move into your space condo is about $540,000 per settler, well within the range where a lot of people could seriously consider living in space. Maybe even you.