An integrated and sustainable system capable of safely transporting humans and cargo from Earth and/or cislunar space to the Martian surface, maintaining the crew on the surface, and having the ability to return the crew back to Earth or cislunar space. 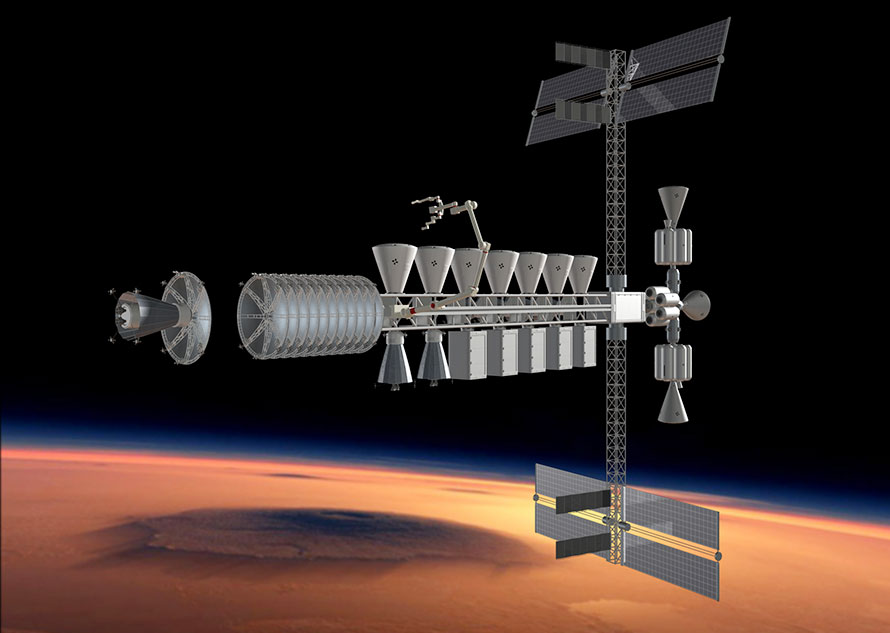 Initial Mars bases will depend upon a transport and logistics connection to Earth or cislunar space. Three critical factors in creating a safe transportation and logistics system are (1) reliability and redundancy in vehicles, equipment and supplies, (2) adequate radiation shielding and (3) having a well-trained medical crew member.

Reaching and returning from Mars, with its great distance from Earth, will be significantly more difficult than similar operations on the Moon. On account of that distance, equipment or supplies that fail on Mars cannot be easily replaced.  An unexpected failure that might be recoverable from on the Moon, only a few days away from Earth, could be fatal on Mars. Consequently, materials and equipment destined for use at Mars should be especially well designed, manufactured and tested for high reliability.

Due to the distance and years-long rescue time, it is extremely important that all human Mars trips use the principle of redundancy. It is especially important to have more than one crew habitat vehicle which can support the entire crew, and more than one main propulsion vehicle, which can propel the entire system, in case of accident or equipment failures, at every phase of the operation. This allows the crew to perform self-rescue, and significantly reduces the problem of distance from Earth as a major crew safety issue.

Unless we are discussing one-way trips to Mars, decisions will be made about whether, after a 6- to 8 month journey, to undertake a 500-day stay (conjunction type mission) or just a 30-45 day stay (opposition type mission). That decision will drive the planning for the transportation, landing, habitation, supply and Earth return systems.

For an ongoing series of Mars expeditions, opposition missions are much less desirable than conjunction missions. The opposition mission type requires leaving Mars orbit within about six weeks of initial arrival time, leaving little time to accomplish much, including repairs if necessary.

Earth to Mars Transportation Systems. Architectures proposed for the transportation systems needed to transit between Earth orbit and Mars orbit include vehicles where the crew will be in microgravity during transit or vehicles using tethers or other methods to create “artificial gravity” by rotation. Most systems contemplate using chemical propellants of one kind or another. Other proposed propulsion systems include nuclear-thermal propulsion and electric propulsion (e.g. ion and plasma). Electric propulsion is currently better suited for cargo than for human transport, and may become more important as both solar cells and electric thrusters are improved. While the preferred goals and payload ought to be the determinants of the appropriate transportation system, the sequence may be just the opposite, with the choice of a transportation system determining the length or the trip type, the resulting stay options at Mars, and the tonnage that can be brought along. The choice of architecture will be influenced by the strength of the desire to have humans on Mars, tempered by the state and cost of then-available technology.  Reusable transit vehicles that can return to Earth orbit or to a logistics base at a cislunar location would greatly reduce costs for repeated Mars flights. Many concepts propose Mars flights leaving from a cislunar location such as the Earth-Moon L1 point (EM-L1) and using lunar-derived propellant to reduce the mass of propellant that otherwise would need to be lifted from Earth.

Earth Orbit to Mars Orbit on a “Cycler.”  A large cycling spacecraft that moves between the two planets in a regular period, without actually entering into orbit around Mars or Earth, would require less fuel and, since it can be very massive, can provide much more radiation protection for its passengers. It would require very high reliability and redundancy for the transfer (taxi) vehicles at each end of the trip, since the cycler will not wait for launch delays. Due to the requirement for multiple transfer vehicles at each end of the trip, the cycler system might not be used extensively until later in the development of civilian transport to Mars.

Mars Surface Landing Systems. Many transportation concepts have been proposed for landing methods, such as:

Entry, Descent and Landing (EDL) techniques. Landing methods for human-sized Mars vehicles will be different from those used for Apollo or for the Mars rovers and landers on account of the thinner atmosphere and different gravity. By 2004, NASA scientists discovered that no one knew how to land large crewed vehicles on Mars. Landing on Mars takes about one-third or less of the propulsive deceleration than is needed for a lunar landing, even though Mars gravity is about twice that of the Moon. Although the landing trajectory can be complicated by short term variations in atmospheric pressure, the thin Mars atmosphere serves as an excellent air brake for a landing vehicle at high speeds (over about Mach 2.5) and can get rid of over two-thirds of the total entry velocity from orbit. However, for final descent and landing at speeds below about Mach 2.5, the air is too thin to slow large vehicles sufficiently, even with gigantic parachutes. Combinations of deceleration methods including the large parachutes were supported up until 2015.

A likely solution to this problem is Supersonic Retro-Propulsion (SRP), which is the use of rocket engines firing toward the vehicle’s direction of motion, a technique that was first demonstrated by the successful re-entry and subsequent landing of Falcon 9 rocket first stages in 2015. A team of NASA scientists analyzed the Falcon 9 rocket entry plume videos and concluded that this technique would work for other types of re-entry vehicles. The large parachute systems for human-sized Mars vehicles were deemed impractical and have been abandoned.

Earth Return Systems. Various architectures have been proposed for a return to Earth, such as:

Orbital Propellant Depot. Mars landing vehicles need to bring some propellant from Earth to be used for the initial landings of the fuel production equipment (“bootstrapping” propellant). Insulated tanks of fuel brought to Mars can remain in Mars orbit as cryogenic propellant depots. These depots would also be available to store propellant made on Mars from in situ resources and brought up by reusable Martian “ferries.”  This stored fuel could then be used for future trips to the surface, for trips to Phobos and Deimos, and/or for Earth return vehicles. The depot(s) could be berthed at an orbiting base.

Orbital Logistics Base. A Low Mars Orbit base would provide the easiest location to reach the Martian surface, and could provide (1) a crew refuge and orbital habitation before landing, (2) logistics capacity to load cargo into Mars ferries, (3) places to berth propellant depots, (4) places to dock Mars ferries and cargo vehicles from Earth and (5) additional science capacity for base site selection, surface monitoring and rover control. A near-equatorial orbit at 400 km high allows the lowest transport fuel requirements for round trips to the surface and back.

Martian Ferries. Having fuel produced on Mars can facilitate continued use of reusable vehicles that return directly to Earth or reusable Mars ferries that go to Mars orbit, rather than single-use “land and abandon” vehicles (Mars landers) and single use Mars Ascent Vehicles (MAVs). This would greatly reduce the tonnage needed from Earth for transportation purposes during construction of an expanded Mars base and thereafter. Initial missions would land propellant production facilities that could be assembled on the Martian surface. Observations since 2010 have shown vast deposits of subsurface water ice in many parts of Mars. Situating a base near a proven ice deposit would allow in situ production of liquid oxygen-hydrogen or oxygen-methane propellants.

Some combinations of these propellants are energetic enough to allow a ferry on the surface to perform a direct Earth return or to allow ferries to reach orbit and return to the Martian surface with a large payload on the same load of propellant, and even leave extra fuel in an orbital depot. Ultra-light structural engineering may also allow liquid methane and oxygen propellants to be used by Mars ferries without orbital refueling. Nearby subsurface water ice would be even more advantageous if confirmed near the equator, where it is believed to exist, because it requires less fuel to reach orbit from the equator and to land near the equator. For this reason, verifying that a landing site has a water ice supply has been considered by NASA since 2015 to be a critical issue prior to human landing missions. 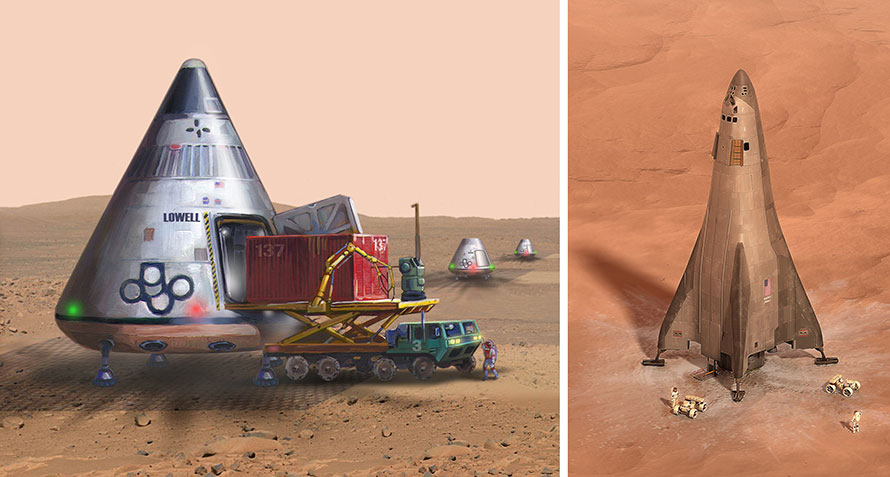 Surface Habitation Systems. The technological and logistical requirements for orbital and surface crew habitats will depend on whether a short or long stay on Mars is planned. The longer the stay, the more supplies will be required and/or fewer crew will be possible. For a short (1 month) opposition stay, the surface habitat may be the lander itself or a pre-positioned habitat.

For a long (500 day) conjunction stay, a pre-positioned surface habitat is likely, possibly supplemented by a supply of oxygen or rocket fuel extracted from the Martian environment by contemporaneously built or pre-positioned ISRU equipment. Site location will probably be determined by availability of large deposits of water ice nearby as a source of water, oxygen, and propellants. A conjunction mission will require a shielded or buried surface habitat. An important piece of equipment is an earthmover that can move the Martian soil to cover habitat modules with regolith to provide shielding from radiation, and also to excavate buried ice. It is likely that conjunction missions will be chosen.

Orbital Crew Habitats. Orbital habitats would be an integral part of an Orbital Logistics Base. Their extent and supply requirements depend heavily on what kind of mission is planned. For a short surface mission, the orbital habitat could serve as a crew refuge. If a long, orbit-only mission is planned so a crew can help locate a good surface base site, the habitat would need extensive supplies and the same level of radiation shielding as during a transit. The habitat also might need artificial gravity. If Earth return vehicles are left in Low Mars Orbit for a short mission, those vehicles can serve as the habitat.

To the extent the entire Mars transportation system is based on reusable vehicles, rather than ones thrown away after a single use, the exploration, development and settlement of Mars will be greatly facilitated and the cost greatly reduced. For example, fewer vehicles will be needed, extra vehicles may be available for redundancy, more cargo can be delivered to the surface, and crew risks may be reduced by not having to use a new untested vehicle each time.

This Milestone can be considered achieved when