NASA has agreed in principle to allow the SpaceX Dragon cargo capsule to dock with the International Space Station. Launch of the Dragon on a SpaceX Falcon 9 is scheduled for November 30 with the docking to occur 9 days later. This will be the 3rd launch of Falcon 9.

Original plans called for an additional flight to first demonstrate a rendezvous with the space station with actual docking to occur on a later flight. These two flights have now been combined into one flight, with final approval from NASA expected. This will be the first demonstration that a privately-developed space transportation system can deliver cargo to and from the space station. 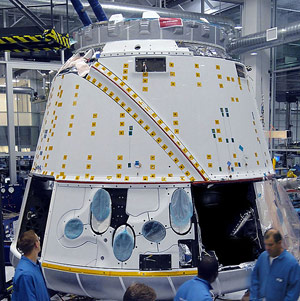 Technicians work on the Dragon spacecraft in SpaceX facility in Hawthorne, CA

Work also continues on modifying the Dragon spacecraft to human-rate it by adding a launch escape system. SpaceX received a $75 million NASA contract in April to develop this system. SpaceX plans to further modify the system in the future to make the spacecraft capable of landing on any solid surface in the Solar System. See the short video below.