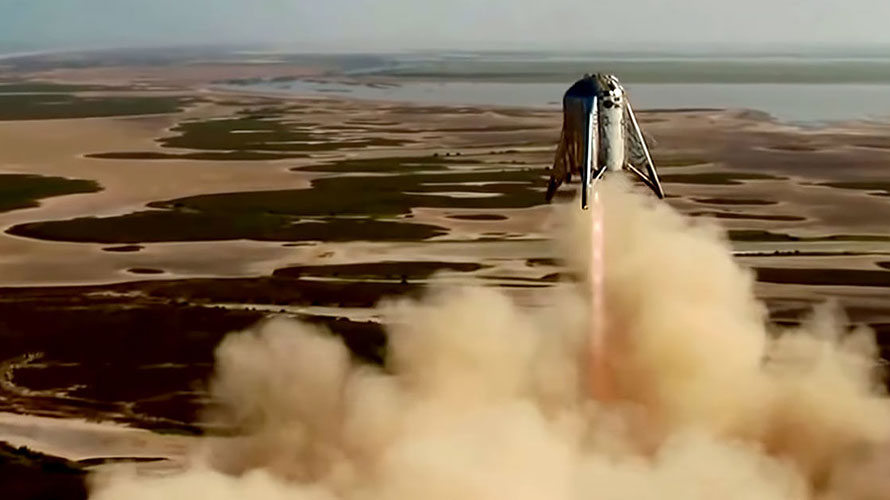 On August 27, Starhopper, utilizing a single Raptor methane-fueled rocket engine, rose 150 meters above Boca Chica, Texas and successfully landed. This is the last Starhopper flight; in the future the rocket will be used as a static ground test stand.

Starhopper’s flight was impressive both technically and for its rapid development schedule. Some called it a flying water tower, but although ungainly in appearance, it served its purpose to provide valuable test data. The flight also highlights work on super heavy-lift rockets capable of placing 100,000 plus pounds into Low Earth Orbit (LEO). Such rockets are being developed by Blue Origin, NASA, SpaceX and both China and Russia.

Starhopper is a precursor to the development of Starship and its booster, Superheavy. The next step along this path is the construction of two prototypes designated Starship Mk1 and Mk2. The Mk1 prototype is being assembled in Boca Chica, South Texas, while the Mk2 is being constructed in Cocoa, Florida. The Starship prototypes are expected to have three Raptor engines. Flight of one or more of the prototypes may occur late this year.

On a different front, NASA is advancing with its Space Launch System (SLS). In an agency statement, Administrator Bridenstine announced that NASA will proceed with the “Green Run” test of the SLS, where its core stage performs an eight-minute static-fire test at the Stennis Space Center in Mississippi.

Notable, but not quite heavy-lift, both Ariane and United Launch Alliance (ULA) are developing a new family of rockets.

It’s an exciting time in the rocket industry, and the “how we get to space” paradigm is certainly changing!