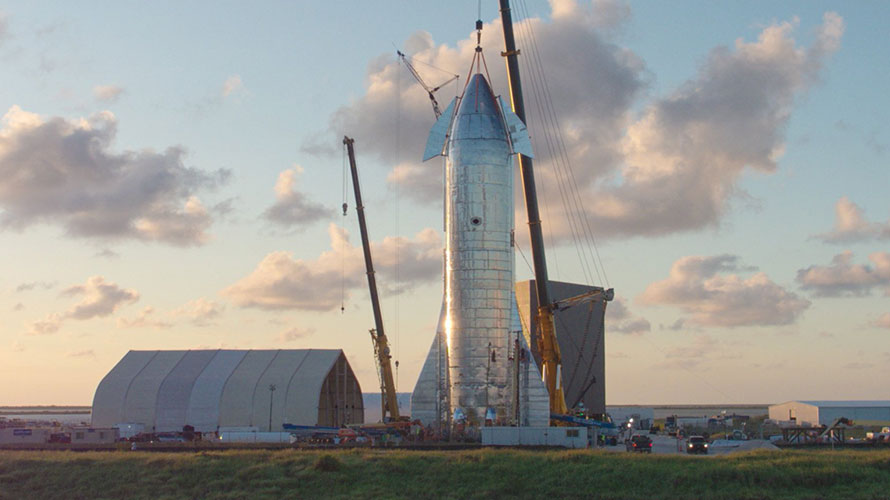 On the evening of Saturday September 28th, Elon Musk provided an exciting update on Starship progress at Boca Chica, Texas.  By the time you read this, you’ll have probably seen some good articles in the space press summarizing the talk (the entire talk and follow-up questions is posted here below).  However, I would like to put this event in a broader context. For the last two years or so I’ve been following what I’ve called the “SpaceX Triple Trifecta” – three major goals that SpaceX is seeking to accomplish simultaneously:

To date, items 2 and 3 above have been nearly fully accomplished, and significant progress toward #1 has been made with the successful DM1 uncrewed first flight of the Dragon 2. In the case of the Block 5 Falcon 9, we have seen not just three successful flights, but three flights of each of three different first stage boosters, totaling nine flights, plus more flights with lower reuse counts.

Although this Triple Trifecta is not quite completed, it is time to look ahead to SpaceX’s next set of ambitious goals, the Next Triple Trifecta.  At this time SpaceX appears to be pursuing three new goals, each insanely ambitious in its own way. They are:

One way to measure progress of Starship/Superheavy would be simply to look for three successful “full-up” flights, where all components are fully re-used.  Another potential criterion for success is re-use so we could define a metric consisting of three flights of fully re-used SS/SH vehicles.  One disadvantage of these criteria is that they don’t reflect near-term test progress well.  In order to do this, we need to add a metric related to incremental testing prior to the first full-up SS/SH fight.

Thus, here is the proposed “Triple Trifecta” for SS/SH:

Elon has stated that Starlink will have initial operating capability at about 900 satellites. Currently launches are being conducted using a F9, with 60 Starlink satellites per launch. We can define three milestones, each consisting of five launches of 60 satellites, totaling 300 Starlinks. This would give us:

With one F9 launch of 60 Starlinks so far in 2019, SpaceX on a course to potentially complete the first milestone in 2019, or at the latest by Q1 2020. It is reasonable to project that Metric #2 will be accomplished in 2020, and Metric #3 in 2021. There are reports that SpaceX may move faster than these projections, but if anything like the above is achieved it will be impressive. After this most probably SS/SH will take over the launching duties, and the launch rate will accelerate.

In-Space Refueling to the Moon

Part of Musk’s genius is an ability to break big projects into parts which support each other, and to use commercial flights for test purposes, allowing for a very large amount of testing compared to previous space efforts.  Once basic SS/SH operations have been demonstrated, Starlink launches will drive the system to high levels of reliability and safety in a mode in which the cost to SpaceX of a failure is modest. Once a sufficient level of SS/SH reliability has been firmly established, the #dearMoon mission (the proposed private circumlunar flight of Japanese billionaire Yusaku Maezawa with several artists and crew) will demonstrate the refueling techniques needed to reach Mars in a relatively low-risk fashion.

A logical set of milestones include:

This may not be the exact set of metrics that make the most sense. In particular, since we are talking about sending a large human crew around the Moon, more testing may be required, possibly including an Earth-orbit simulation of #dearMoon with a small crew but the same duration and number of engine firings.  This trip is sufficiently short that an extension of the Environmental Control and Life Support System (ECLSS) used by Dragon 2 may suffice, but most likely SpaceX will be getting a head start on the much superior ECLSS systems needed to get a crew to Mars.

Perhaps the most significant aspect of this new “Triple Trifecta” is that SpaceX has already taken in money for #dearMoon and Starlink, probably as investments, but still a lot of money.  SpaceX has hinted that the announcement of the first commercial SS/SH customer will come soon, and there can be little doubt that most SS/SH “testing” will have a paying customer.

At the completion of this new “Triple Trifecta” SpaceX will have virtually all the elements needed to start building a city on Mars.  The missing pieces include detailed ground-truth knowledge of Martian resources, reliable ECLSS for interplanetary flights, and experience landing on Mars.  Speculatively, Musk will seek some kind of partnership with NASA to address ground-truth knowledge of resources and Martian landing techniques. The ECLSS testing has an easy solution: outfit several Starships with test ECLSS equipment and rent them out to tourists or commercial firms for various projects. As Elon pointed out in his update, a single Starship has about the same interior volume as the International Space Station, so renting out Starships for various purposes, i.e. filming a movie, seems quite attractive. After a couple of years SpaceX will have sufficiently refined the ECLSS systems to support a journey to Mars. Imagine a “#dearMoon” follow-on with a Starship circling the Earth and Moon for two years, perhaps while a reality TV show was filmed on-board. These projects don’t have to be highly profitable. It will be quite sufficient to just cover the costs of the flights.

Next will come the moment of truth – the start of the settlement of Mars.  But that is a topic for another day.

PS: The presentation by Musk (below) standing in front of the Starship Mark 1 and a restored Falcon 1 on the 11th anniversary of SpaceX’s first orbital flight was epic cool! Note that the press conference following was even more informative than the presentation itself. Total time: 1 hour 25 minutes.