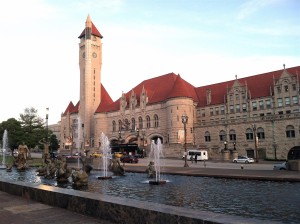 “St. Louis Union Station, once the largest and busiest passenger rail terminal in the world, is now one of America’s great historic destinations. Union Station first opened in 1894, but ceased operation as an active train terminal in 1978. Union Station reopened in August of 1985 as the largest adaptive re-use project in the United States. Today, this 122 year-old National Historic Landmark of unmatched beauty and elegance is home to the 539-room St. Louis Union Station Hotel – a DoubleTree by Hilton Hotel, a conference center, shops and restaurants, a lake and plaza for festivals, concerts and other special events. And, of course, the stunning Grand Hall is a destination in its own rite.”

For those who “geek out” on railroad history or architecture, St. Louis Union Station is a treasure trove. The website states, “St. Louis architect and former railroader, Theodore C. Link, designed three main areas: the Headhouse, the Midway, and the Train Shed. The Headhouse contained the Terminal Hotel, ticket offices, waiting rooms, a restaurant, and offices for the Pullman and Terminal Railroad Association Companies. The Midway was the covered transfer area for passengers [and will be the ISDC Exhibit Midway]. The Train Shed was a large, roofed area covering the loading platforms and track. 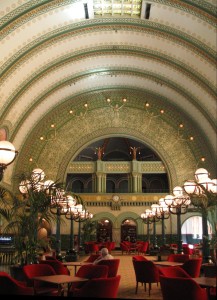 On September 1, 1894 St. Louis Union Station opened as the largest, most beautiful terminal in the United States. This enormous project was built at the cost of $6.5 million. The gem of this new Station was the Grand Hall with its gold leaf, Romanesque arches, 65-foot barrel vaulted ceiling and stained glass windows. The most magnificent of these stained glass windows is the ‘Allegorical Window’ which is majestically framed by the famous ‘Whispering Arch.’ 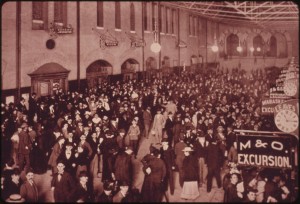 Just beyond the Head house was the Midway, which was the midway point where friends bid farewell or welcomed home visitors from across the nation and around the world. In its heyday (as shown in image) in the mid 1940’s, the Midway was the spot where over 100,000 passengers a day traversed on their way to or from a train. The platform area was covered by an enormous single-span train shed designed by George H. Pegram [now called the Pegram Room]. This was not only one of the largest train sheds ever built, but it also covered the greatest number of tracks. After World War II, the general public began choosing other forms of transportation. In 1976, this magnificent station was designated a National Historic Landmark. Finally, on October 31, 1978, the last train pulled out of St. Louis Union Station.” 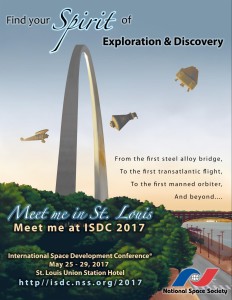 NSS and St. Louis Space Frontier are delighted to host the International Space Development Conference® at Union Station May 25-29, 2017. It’s a bit too early to make your room reservations at the hotel, but you can register for the conference now! Visit ISDC2017.nss.org/ to register at the very reasonable early bird prices.

Find Your Spirit of Exploration and Discovery postcard: Maggie Duckworth, 2016