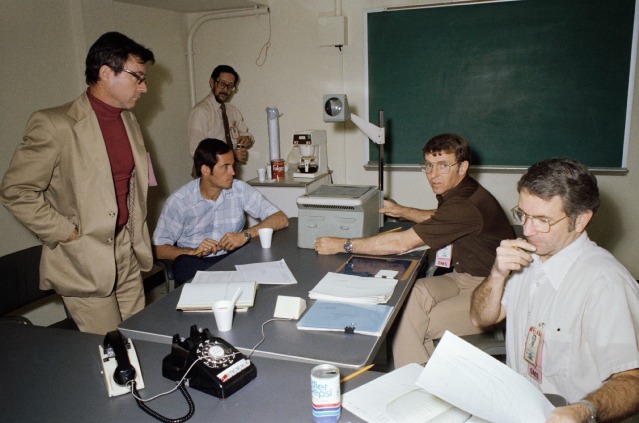 NASA photo from 1981. I’m assuming this was taken after NASA made clones out of the remaining DNA samples of Young and Crippen. Engle and Truly were not aware of the switch yet…but wait, were STS-2 clones too? The mind boggles!
Part of the never-ending fun of being a spaceflight enthusiast is hearing endless conspiracies about various NASA missions. I won’t even get into the dozens of crazies um, curious people who think the moon landings were faked. A friend sent me a link to what may be the very best NASA conspiracy theory ever, though. This one involves the space shuttle Columbia and cloning. And not just ordinary cloning – NASA somehow managed to clone John Young and Bob Crippen. I wish I made this whole thing up in my mind, but here’s a link to prove that someone dreamed up this hot mess scenario and posted it on an Internet message board.
I’m just going to do a capsule summary of this interesting theory, since I’ve already posted the link above, and plus if I read the entire poorly written post again I’m afraid I’ll legitimately have some kind of grand mal seizure from the awful grammar and writing. Basically, the poster claims that the “real” space shuttle Columbia exploded or was somehow destroyed. As if this conceit wasn’t tasteless enough (seriously, anyone writing a fanfic-esque story about a fictitious space disaster which kills real people has some kind of mental issue…), the poster claims “synthetics” a.k.a clones were made of STS-1 astronauts John Young and Bob Crippen in order to carry out the “fake” first Columbia mission. Or something like that. Around this point I thought someone had given me some of the “bad shit” (a.k.a brown acid) from Woodstock, and I had to stop reading.
So there you go. This is the greatest space conspiracy theory I’ve probably ever read, although I am sure there are some even more amazing stories out there. I can assure all readers that STS-1 was, in fact, a real space shuttle mission which began and ended successfully with its non-cloned astronauts on board. Also, how difficult would it be to clone Young and Crippen? Seriously…? I doubt cloning technology was fantastic in 1981; remember, 1981 still boasted cathode ray televisions and rotary phones. NASA would have messed up the clones. Clone John Young would have been from Rhode Island, and he would have hated corned beef sandwiches. Clone Bob Crippen would have hated tanning. People would have caught onto the deceit pretty quickly. YOU CAN’T CLONE PERFECTION, PEOPLE! 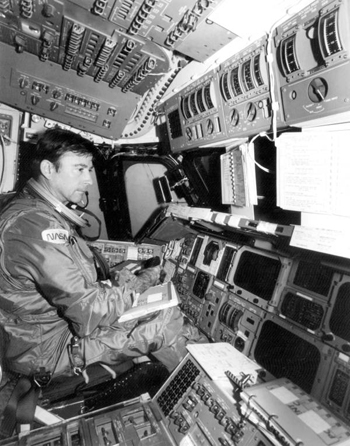