The following entries were accepted into the 2015 NSS Roadmap to Space Settlement Student Art Contest. Many of them did not technically meet this year’s contest requirement for realism but were nevertheless accepted into the contest because they depicted a space settlement at an age-appropriate level of skill. 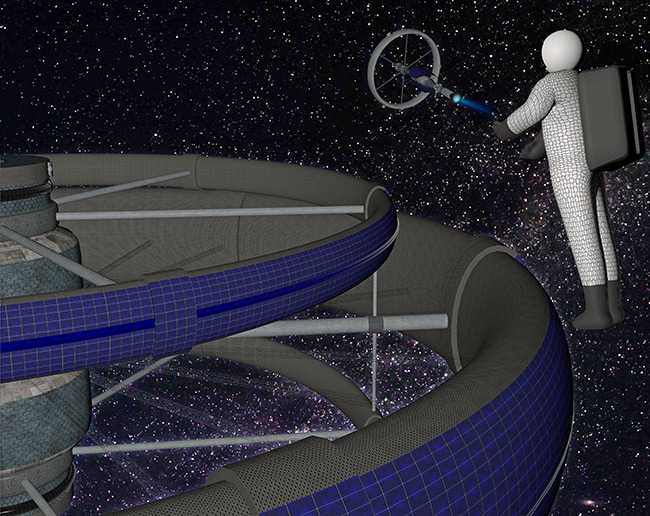 Description: An inhabitant of Euxinus is looking at the Interplanetary Spaceship which has just begun its trip to Mars. Euxinus is located in the Earth-Moon system Lagrange L4 point. The inhabitants enjoy various entertainment activities, one of them being to admire outer space in the proximity of the settlement, using a jet pack. As the long trip to Mars would have negative health effects on the human body, the Interplanetary Spaceship facilitates the journey between Euxinus and Mars by creating pseudogravity by rotation. Tools Used: Autodesk 3Ds Max 2014 and Photoshop CS6. Also, creativity and knowledge of space exploration played a major role in creating this artwork. 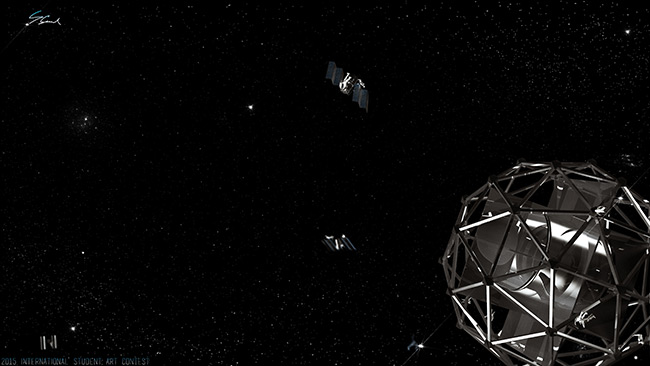 Description: The settlement design is based on the basic atomic layout, due to the high adaptability and practicability it offers. The construction starts with 3 basic rounded rectangles, made entirely out of carbon nanotubes. After the core of our settlement is completed, a couple of engines working on compressed air will set it in a spinning motion, generating the gravitational field required to keep the next components afloat and orbiting around it. Tools Used: 3Ds Max 2015 with V-ray 3.0 and Photoshop CC. 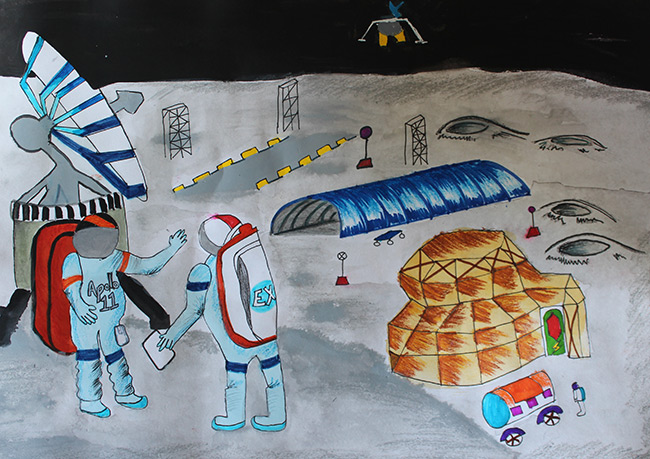 Description: People who went to the Moon can be seen setting up their camp. Tools Used: Poster colors, oil pastels, pencil colors and sketch pens are used in my painting. 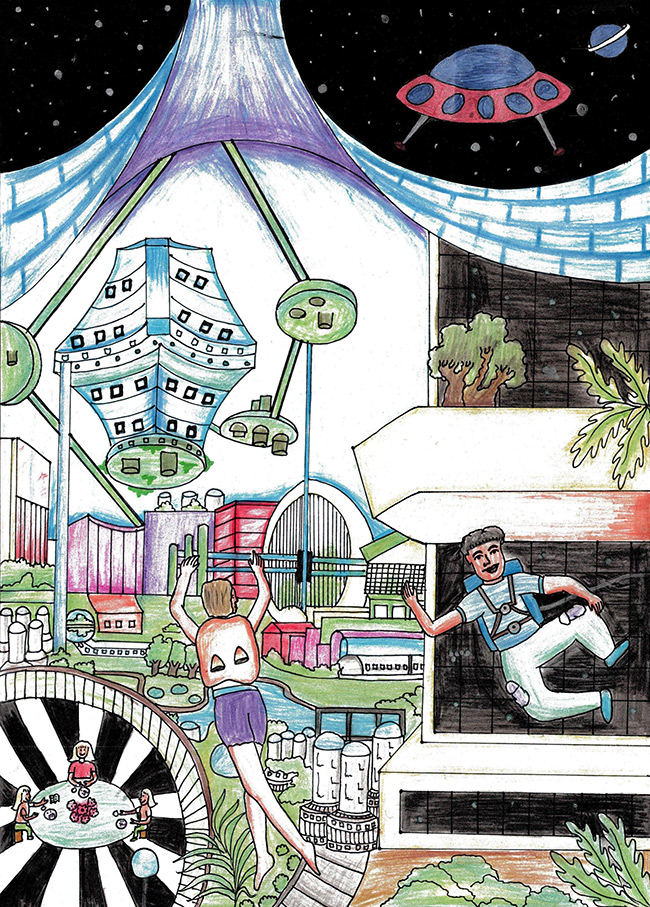 Description: The illustration depicts a life devoid of earthly hassles wherein the subject transcends into space, beyond the planet Earth into an orbital settlement which has ultramodern technology. The inhabitants in this realm are equipped to live life at a scintillating pace with the help of simulators, which help them fly from one spot to the other. The picture reflects the leisure time of the inhabitants and the various means of entertainment. Tools Used: A pencil, eraser, cartridge sheet, oil pastels, poster colors, markers and pencil colors were used to make this painting. Based in part on an illustration from NASA SP-413 Space Resources and Space Settlements. 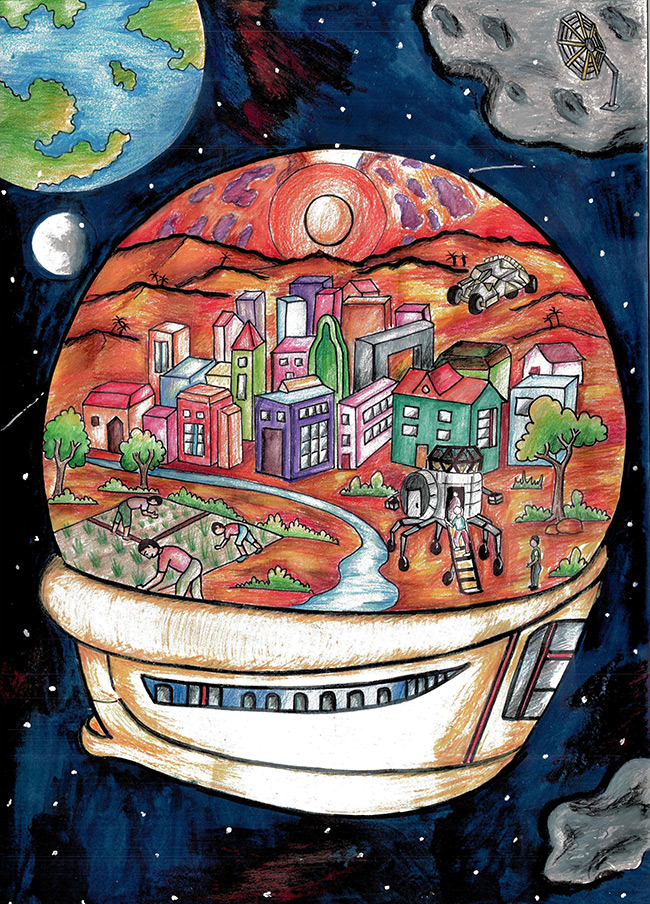 Description: A set of huge challenges both technological and economic have been transcended. The artist here envisions a settlement wherein the living and working of humans is as close as possible to that on Earth, depicting an agrarian lifestyle coupled with technological progress. Tools Used: A pencil, eraser, cartridge sheet, oil pastels, poster colors, markers and pencil colors were used to make this painting. 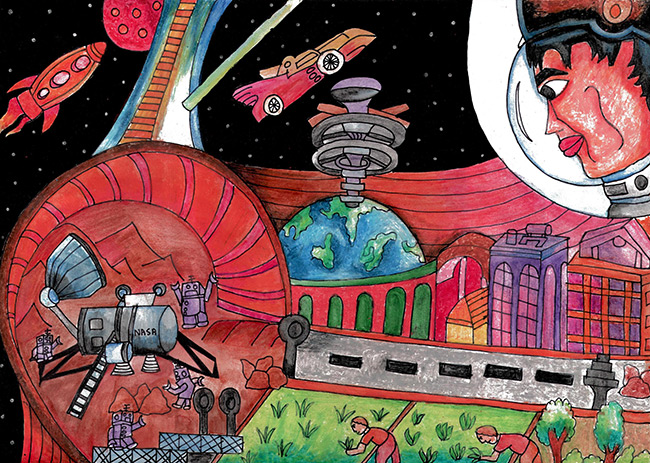 Description: There is nothing that humans cannot make possible because even Impossible says, I M possible. This picture depicts harmonious relations established between Earth and Mars. Humans have deployed manpower and machinery on Mars and are making optimum use of the potential resources there. It portrays technological harmony established by Man. Tools Used: A pencil, eraser, cartridge sheet, oil pastels, poster colors, markers and pencil colors were used to make this painting. 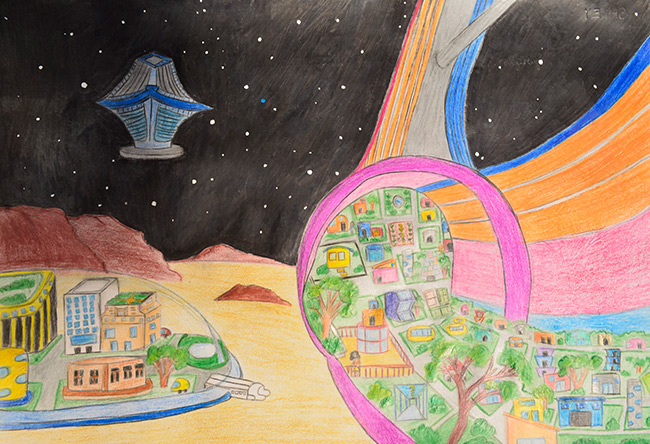 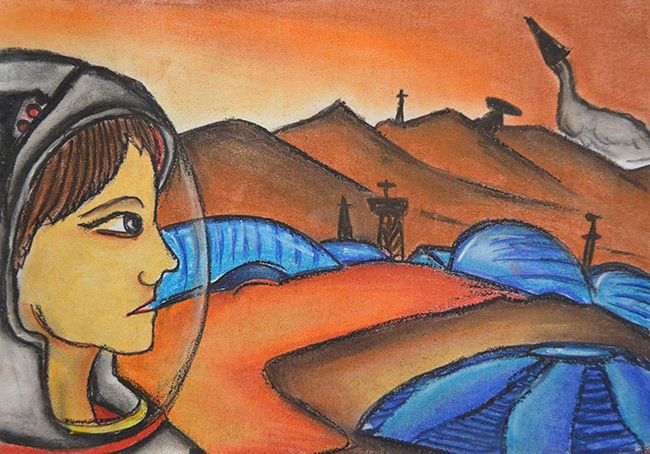 Description: I have tried to depict scene away from Earth. In the upcoming years, outer space and other planets will eventually be able to bear life. So, the painting depicts the astonished astronaut vividly looking at his surrounding space in amusement. Far away in painting a rocket is taking flight with a streaming plume of pollution, making its way through the space antennas. Tools Used: Soft pastels and crayons have been used. Also, the painting has been fixed with a fixer. Based on a 2008 entry to the NSS Space Settlement Calendar Art Contest. 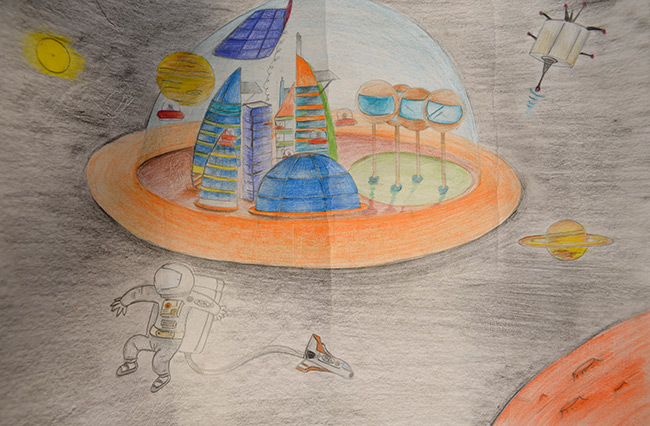 Description: This is the journey of mankind in which it has the technology to live and work in a very big craft floating in the lonely space. Because of our intelligence and our technology we were able to think of making a spacecraft and work in space, take samples of matter from the universe and think of other countless possibilities. But for now this is a very big achievement in itself. By researching the planets behavior we have been able to simulate its surroundings inside the craft. Tools Used: Pencil, eraser, pencil colors. 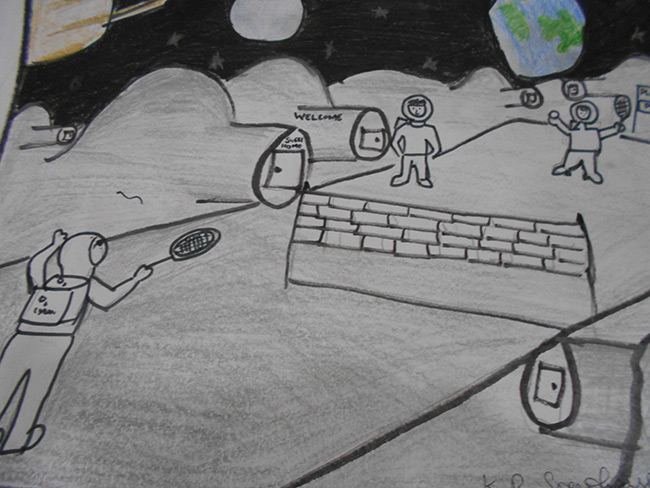 Description: Life and game in space. Every one is wearing oxygen masks. Houses are air tight. Tools Used: A3 size chart, color pencils and crayons. 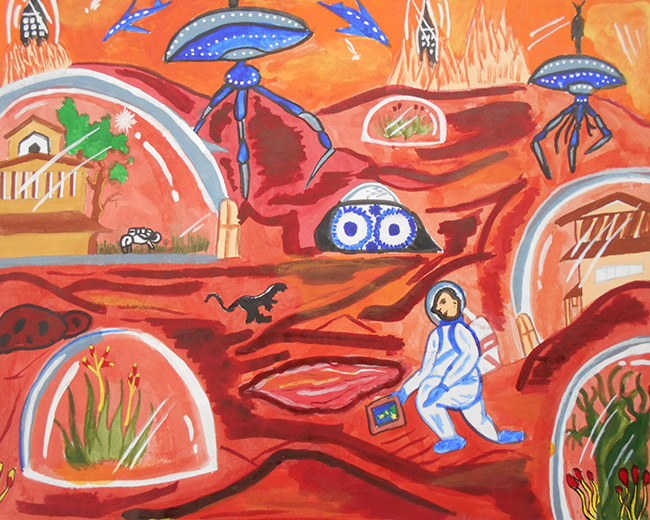 Description: People, plants and houses are with oxygen mask. Small creatures are also there. Space shuttles are used for transport. We will feel as if we are living on Earth. Tools Used: Chart A3 size, poster colors.