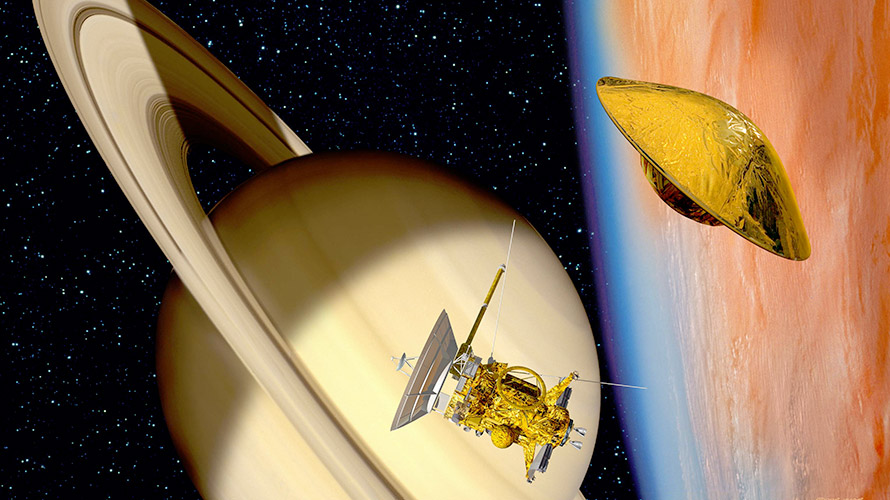 The NASA and European Space Agency Cassini and Huygens Teams are the winners of the National Space Society’s 2018 Space Pioneer Awards for Science and Engineering. Saturn has been revealed to science in great detail at last by the Cassini-Huygens mission. The mission saw the Cassini spacecraft meander through the moons and rings of Saturn for thirteen years, while the Huygens probe made a daring descent through the hazy atmosphere of Titan to soft land on the ice-covered ocean world in January 2005.

NSS invites the public to come meet, interact and learn from the mission teams. NSS will present the Space Pioneer Awards to each team’s representatives at our annual conference, the 2018 International Space Development Conference (the 37th ISDC) to be held in Los Angeles, California, at the Sheraton Gateway Hotel at LAX. The conference will run from May 24-27, 2018.

Saturn is our solar system’s most iconic-looking planet with its vast system of spectacular rings and numerous unique moons. It was shrouded in mystery throughout our history until it was first unveiled by NASA’s Pioneer and Voyager fly-bys.

The Cassini-Huygens mission was a collaboration between NASA, the European Space Agency (ESA), and the Italian Space Agency (Agenzia Spaziale Italiana – ASI). NASA developed the Cassini Saturn orbiter, ESA developed the Huygens Titan Probe, and ASI, in addition to its contribution to Huygens through ESA, supplied major components to Cassini, including its high gain antenna and parts of several orbiter instruments.The dual-spacecraft mission was launched on Oct 15, 1997, over 20 years ago, and is regarded as one of the most significant space missions in history.

The Cassini spacecraft, with its array of cameras, spectrometers, and in-situ instruments, returned an enormous amount of data and images from Saturn and its surroundings. It thoroughly mapped many of the moons of Saturn. Most notably, Cassini discovered a plume of water vapor and icy particles venting into space from a subsurface ocean within the moon Enceladus. This finding has helped pivot the search for life beyond Earth toward the underground oceans inside a variety of outer solar system objects. The Huygens probe directly studied the atmosphere of Titan during its descent. Its images revealed a rugged landscape with branching drainage channels and possible dry lake bottoms, along with the first images taken from the surface of a world in the outer solar system on January 14, 2005.

Multiple flybys of Titan by Cassini itself have helped to create a global map of the only other world in our solar system with active (methane) rain storms affecting a solid water ice surface. The Cassini spacecraft’s mission ended with an intentional plunge into Saturn on September 15, 2017, one-month short of its 20th launch anniversary.

The Space Pioneer award consists of a silvery pewter Moon globe cast by the Baker Art Foundry in Placerville, California, from a sculpture originally created by Don Davis, the well-known space and astronomical artist. The globe, which represents multiple space mission destinations and goals, sits freely on a brass support with a wooden base and brass plaque as shown at right. The support and base are created by renowned sculptor Michael Hall of the Studio Foundry of Driftwood, TX. NSS has several different categories under which the award is presented each year, starting in 1988. Some of the recent winners of Space Pioneer Awards include Elon Musk, Ray Bradbury, Robert Bigelow, Apollo Astronaut Russell L. Schweickart, Dr. Michael Griffin, the Rosetta Mission Team, the Kepler-K2 Team, and the New Horizons Mission Team.