The National Space Society Celebrates the Life of Hugh Downs 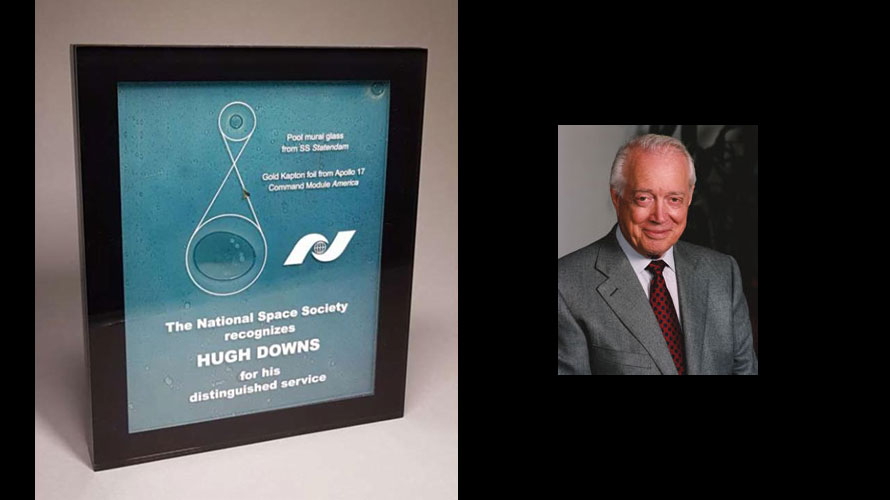 The National Space Society (NSS) mourns the passing of Hugh Downs at age 99 on Thursday. Mr. Downs was an iconic figure in television news as well as a long-serving Chairman of the NSS Board of Governors.

“Hugh Downs was larger than life, and his accomplishments were legendary throughout society. He was a mentor, a statesman, and a remarkable leader for the National Space Society. We laud the profound legacy he leaves behind, and though we will miss him greatly, Hugh will always have a special place of honor among us,” said Karlton Johnson, the Chairman of the National Space Society’s Board of Governors.

Mr. Downs had a history of supporting space advocacy. He was a visionary who understood that the cancellation of the Apollo program in 1972 would adversely affect America’s leadership in space. He soon partnered with NASA’s Wernher von Braun, father of the Saturn V rocket, to form a new space advocacy organization, the National Space Institute (NSI), in 1974. The Institute later merged with the L5 Society, which was based on the work of Dr. Gerard K. O’Neill, to become the National Space Society.

Mr. Downs was not only a founding member of the organization but also the first and longest-running Chair of the Board of Governors. With his experience as a television personality who covered NASA’s pioneering era, Mr. Downs was also a powerful communicator of important space issues for NSS.

Mr. Downs’ voice reached millions of people, including both the general public and those within the space community, and he was broadly influential. He spoke at the NSS annual International Space Development Conference (ISDC®) multiple times and was recognized for his exceptional contributions to space advocacy by space leaders such as Buzz Aldrin, John Glenn, and Scott Carpenter. Though he retired from his formal media role in 1999, he continued to support NSS well into the 21st century.

“Hugh created a narrative that conveyed the benefits of space to the public for decades,” said Lynne Zielinski, NSS Vice President of Education and liaison to the NSS Board of Governors. “NSS recently presented him with our Distinguished Service Award in commemoration of his extraordinary outreach activity for the Society.” Concurrently, NSS honored Mr. Downs by elevating him to Chairman Emeritus status due to his long and distinguished career in supporting space exploration and development.