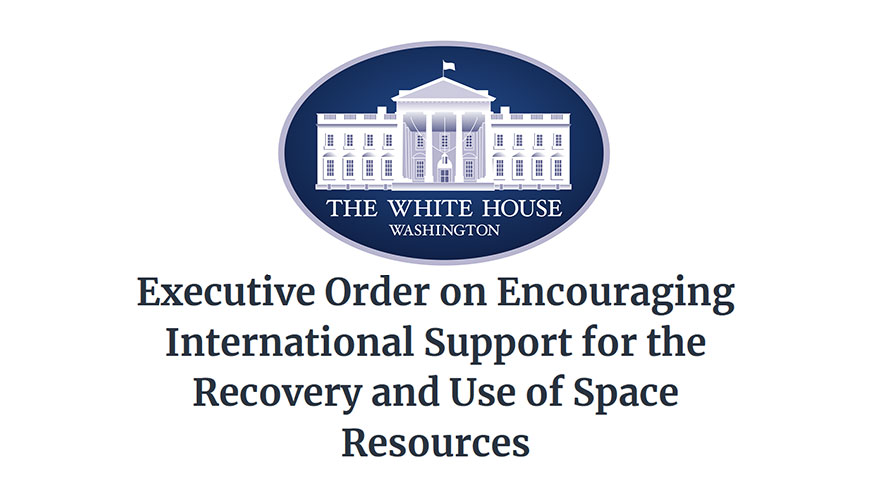 The National Space Society commends President Donald Trump for signing today’s executive order that sets a dynamic U.S. policy for the exploitation of off-Earth resources. The document is called “Encouraging International Support for the Recovery and Use of Space Resources,” and clarifies language in the administration’s earlier Space Policy Directive 1 (SPD-1) saying, for example: “Successful long-term exploration and scientific discovery of the Moon, Mars, and other celestial bodies will require partnership with commercial entities to recover and use resources, including water and certain minerals, in outer space.”

The executive order also reaffirms the right of U.S. citizens to engage in commercial mining resource extraction activities in space and declares that these activities are consistent with the Outer Space Treaty of 1967. It notes that the U.S. is not a party to the 1979 Moon Agreement, which  would hamstring commercial utilization of lunar and other celestial body resources. Greg Autry, Vice President for Space Development notes, “This order is a resounding validation for many of us in NSS who, as young members of the L-5 Society, worked successfully to block the misguided 1979 Moon Treaty.”

Alfred Anzaldua, the Executive Vice President of the NSS, said, “We applaud the executive order’s mandate for administrative agencies to take ‘all appropriate actions to encourage international support for the public and private recovery and use’ of resources in space. America must recognize that other countries look to the United States as the leading spacefaring nation and will take their cues from us. This executive order will galvanize action by the U.S. in that direction.”

The executive order makes it clear that the U.S. sees a clear pathway ahead to off-Earth mining, resource extraction and utilization, without the need for new international treaties. These activities will serve to open new opportunities for investment in the private sector, as well as enabling new partnerships between NASA, private industry, and international space agencies and private operators.