The National Space Society Pays Tribute to Dr. Kalam — One of Our Leading Lights Has Joined the Stars

On 27 July 2015, Dr. APJ Abdul Kalam, eleventh President of India and a friend and inspiration to the National Space Society (NSS), passed away. “NSS would like to convey our condolences to the family and friends of Dr. Kalam, and to all of India. His death is a great loss not only to India, but to the whole of humanity,” said Mark Hopkins, chair of the NSS Executive Committee. “In his honor, a permanent part of the online NSS library will be dedicated to his visionary space legacy.”

Dr. Kalam shared the National Space Society’s vision of the future of space solar power, exploration, and human development. He was a true friend to NSS — making time to meet with our members, attending and addressing the 2013 International Space Development Conference, taking part in our society’s press conferences, and giving his name to our shared Kalam-NSS Space-based Solar Power Initiative.

In alignment with NSS, Dr. Kalam’s vision encompassed the mining of asteroids and the use of the Moon as an industrial base and source of energy. Looking into the future, he saw an extra-terrestrial habitat on Mars as a fail-safe mechanism for problems on Earth. He hoped to see these activities blossom into a mature regime of space security, with Space Traffic Control, Space Debris Management, and an International Space Force for defense against asteroids.

Born in 1931, Dr. APJ Abdul Kalam was an aerospace engineer, a true rocket scientist who significantly advanced rocketry and spacefaring in India’s Defense Research and Development Organization and in the Indian Space Research Organization. Heir to the vision of Professor Vikram Sarabhai, who set India on a course of a socio-economically oriented space program, Dr. Kalam was the man who raised India’s eyes to the stars, and led India to join the community of spacefaring nations. One of the true statesmen of our generation, Dr. Kalam served as the 11th President of the world’s largest democracy, and was regarded as one of the greatest minds, visionaries, and peacemakers of the early 21st century. He died at age 83, articulating his visions to a new generation.

In a stirring eulogy entitled “India has lost its Jewel,” India’s Prime Minister Narendra Modi said, “Kalamji saw poetry in a tree and energy that could be harvested in water, wind, and sun. We should learn to look at the world through his eyes, and with the same missionary zeal.” He further stated, “his memory is best honored by the creation of new institutions that nurture science and technology, and enable us to find a beneficial equation with the awesome power of nature.”

We at NSS could not agree more. At the heart of Dr. Kalam’s vision was an international initiative to harvest the power of the sun and transmit it to Earth, what he called a “Global Energy Technology Initiative for Harvesting Energy from Space.” Dr. Kalam asked what vision could be “greater than any other vision so far envisioned by humanity?  … Clean energy from space solar power for 24×7.” NSS will pick up the torch and carry on his vision.

Dr. Kalam believed that space solar power was the key to a livable planet and to the elimination of man-made green house gasses. The scale of his vision for the benefit of humanity was vast — he believed that by 2052, India alone could have 108 satellites delivering 544 gigawatts of green power, doubling India’s per-capita GDP and avoiding 66 million tonnes of carbon emissions. To that end, Dr. Kalam proposed that the US, India, and other spacefaring nations invest $4 billion dollars in the next five years for a feasibility study and for development of the necessary technology to realize economical space solar power.

Dr. Kalam was a towering spacefaring advocate. His passing is a deep loss to NSS. Loved and admired by the masses of India, he was loved and admired by us as well. The legacy of Dr. Kalam’s writings will form a permanent part of the online NSS library. We were honored to work with him and to present him with our 2013 Wernher von Braun Memorial Award for leading India into space and for being a global leader in space development. He will be missed terribly by all around the world who share a common vision of humanity’s future in space. 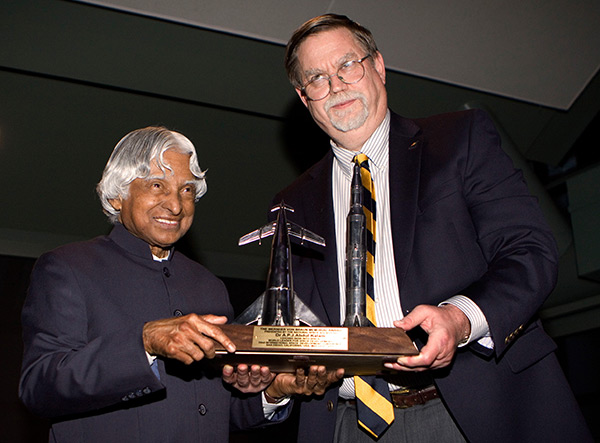 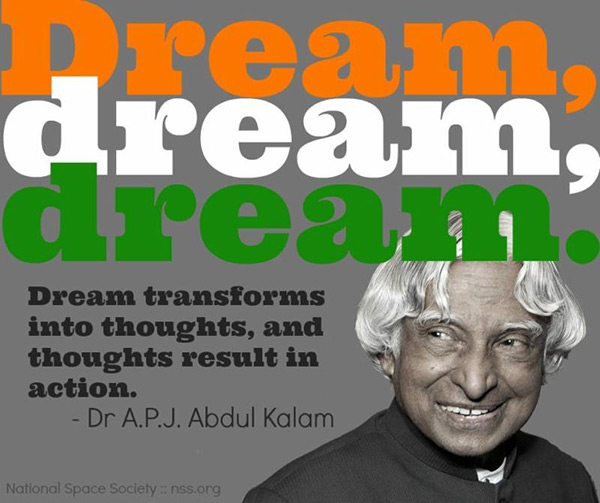