The Space Movement: The Inevitability of Space Settlement

The vast majority of the resources of the solar system are in space rather than on Earth.

One way to grasp the amount of material resources available is to ask how much land area could be produced in the form of O’Neill Space Settlements. O’Neill Space Settlements are large hollow cylinders built in space several miles long and a few miles wide. They rotate creating the effect of Earth-normal gravity on the inside of the cylinder’s shell. The cylinder is filled with air creating an Earth-normal atmosphere. Natural sunlight is brought inside via a system of mirrors. The interior surface of the shell is contoured and covered with soil, lakes, streams, forests, fields and cities. The result is a home that is at least as nice as some of the best places on Earth.  The asteroids have enough material of roughly the right composition to produce O’ Neill Space Settlements with a combined land surface area that is 1,000 times the land surface area of the Earth. If the moons of the outer planets are also used, this number increases by a factor of 100. There is a large cloud of comets that circle the Sun beyond the orbit of Pluto, called the Oort Cloud. If this material is added, then the number increases by another factor of 10.  The total resulting land area is one MILLION times the land surface area of the Earth — a truly enormous number.  But this number is tiny when compared to available energy resources.

The Sun produces one to ten TRILLION times the energy currently used by humanity. Typical Space Solar Power scenarios capture a very small fraction of this energy for use on Earth. These scenarios are just a first step in the direction of the potential that awaits us.

Will these resources eventually become available for use at competitive prices? The answer (baring a civilization-ending catastrophe, such as an asteroid collision with Earth that ends all life) is almost certainly yes. The twin forces of resource exhaustion and technical change are virtually unstoppable.

Consider the example of the modern oil industry. The oil industry began in 1859 with the first successful oil well.  Pennsylvania was the location. By today’s standards, the oil was obtained by little more than “kicking” the ground.

As time passed, resource exhaustion began to set in. “Kicking” the ground in Pennsylvania was no longer sufficient. The force of resource exhaustion pushed the oil industry to increasingly exotic locations:  first to places like Texas, later to the North Slope of Alaska and more recently to the ocean floor, miles below the surface.

Simultaneously the force of technical change drove humanity towards more efficient ways to find and drill for oil. This made the move towards ever more exotic locations economically viable.

Similarly, the forces of resource exhaustion and technical change apply to the Earth as a whole. The ongoing exhaustion of the Earth’s resources is pushing us towards more exotic locations — specifically, towards the space resource bonanza awaiting us. Technical change is making such a development increasingly viable.

It is only a matter of time before the large scale move into space begins. It is the goal of NSS and more generally the Space Movement for this to occur sooner rather than later.

According to Michael Griffin, former NASA Administrator, “One day, I don’t know when, but one day, there will be more humans living off Earth than on it” (February 2006). NSS looks forward to that day. 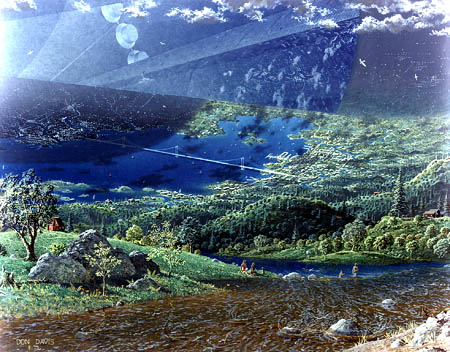 The Space Movement: Contents
Next article:
The Augustine Report and the Mainstreaming of our Space Settlement Goal