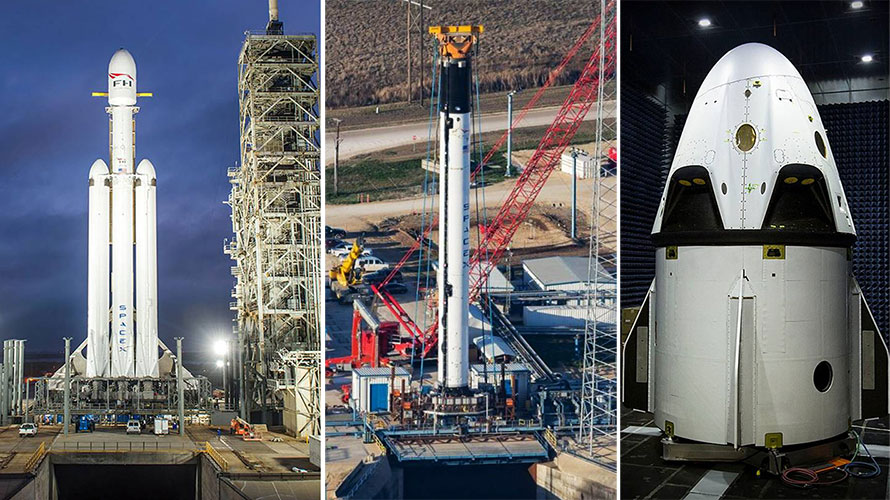 SpaceX has three major goals for 2018:

If all three of these goals are achieved, SpaceX will have catapulted itself from merely being the largest U.S. launch provider, to a global one-stop shop that has the potential to truly dominate the worldwide launch market in virtually all categories. However, a closer look at each of these goals reveals just how challenging the “Trifecta” really will be for SpaceX.

With the recent successful launch of Elon Musk’s Red Tesla roadster in the direction of Mars, SpaceX would appear to be well on its way to achieving the first goal. The only kink to be worked out relates to running out of ignition fluid while trying to land the center core of the Falcon Heavy on a drone ship, something one suspects SpaceX can readily overcome. However, two more Falcon Heavy launches are scheduled for 2018, one with the Air Force, and another with a commercial payload. Both must go well to check this box, but most importantly, both need to fully utilize “Block 5” technology, which we will now consider.

So far SpaceX has demonstrated remarkable success in landing first stages, and then re-using them in later flights. However, no first stage has been used more than once. Most of the first stages re-used so far have been the “Block 3” version of the “Full Thrust” F9, while a few have been “Block 4.” To achieve its goal of re-using each first stage up to ten times with minimal refurbishment, the more powerful and more reliable “Block 5” technology, which has not yet flown, is required. There are a number of aspects to “Block 5” including but not limited to:

This is a fairly tall order, but the first flight of “Block 5” is expected in late April. However, one flight is not sufficient to check off this box since NASA is requiring seven successful Block 5 flights before a crew is allowed on top of one. There is a good chance SpaceX (which has already done 5 launches in 2018, and is targeting a total of 30) can do this during 2018, but it will be a remarkable achievement.

Finally, SpaceX is planning both an uncrewed and a crewed flight to the ISS of the Dragon 2 capsule, plus a launch abort test for Dragon 2. There is a lot of new territory here for SpaceX with the Dragon 2: spacesuits, environmental control and life support system (ECLSS), a crew, docking with the ISS rather than berthing, etc., plus the crewed flight is planned for late in the year, making this milestone especially challenging. Stuck in the middle of all this is a third flight to test the crew escape system on a real launch.

The “trifecta” described above, can be viewed as a “triple trifecta” since each component has at least three parts. I know that NASA is looking for seven Falcon 9 Block 5 flights, but if three could be achieved, the chances of getting to 7 are pretty good. So far, the scorecard looks like this:

I don’t think the odds are good that SpaceX will achieve all three of these ambitious triple goals in 2018. In particular, the crewed Dragon flight is widely rumored to be slipping out of December due in large part to a lack of staff at NASA to “certify” that all the boxes have been checked. However, they are likely to achieve much of what they are aiming for, and since they are aiming so high, the “much” they achieve will be amazing.