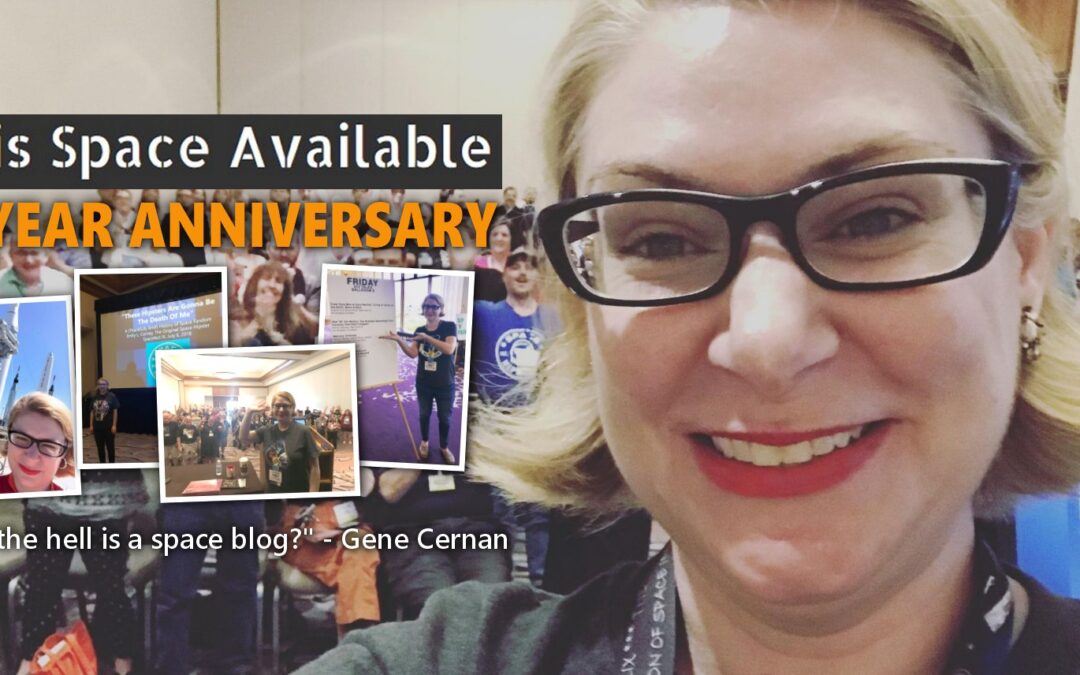 On November 3rd, 2010, I pressed the “create blog” button for This Space Available. In the decade that has passed since that fateful day, I went from writing crappy 200 word posts about stuff people already knew about to writing a seemingly endless series about two little-remembered scientists who, I felt, deserved a second, more contemporary glance during the 2020s. I could write a better piece about Jack Lousma’s life and career, but I’ll save that for another time; for now, this blog posts marks a milestone I never imagined I’d even reach.

When I first started This Space Available, I had a just handful of readers. Since that time, I’ve developed a faithful following, was asked “What the hell is a space blog?” by the Last Man on the Moon, and have even been cited as a source in others’ pieces a few times. I’ve worked hard to show that Skylab 4 was much more than just an oft-misreported story about a “mutiny” that didn’t even happen; I also managed to gain some insights about NASA’s science-versus-engineering issues during the 1960s and early 1970s from the only Australian-born Apollo-era astronaut (and some fun reminiscences about his time in Antarctica). There was a lot about Skylab in general, and during this last year, a lot about Gerard K. O’Neill and Brian O’Leary, two figures who never flew in space, but who simultaneously managed to have both insider and outsider status within the space community. I was also able to meet and discuss spaceflight with a great many of my childhood heroes, something which will never lose its surreal quality. Some have left Earth for good now, but I will always treasure their presence in my career and life.

I thought about writing a very long piece critiquing my hits and (great many) misses throughout the past decade, but instead I’d like to look at the future, and what I’d like to do next. Of course, I’d finally like to finish a book, and who knows, I’d like to discover even more about the program(s) I love the most (laughs in Skylab). I did have some research trips planned and goals I wanted to reach during 2020, but alas, life and the pandemic happened, and I was unable to achieve much of that. But, I won’t beat myself up, and I was able to mark one goal off the list this past week: I finally visited Huntsville, Alabama, home of the U.S. Space and Rocket Center, which has not only one, but TWO Skylabs. Seeing them with my own eyes for the first time was oddly like going back home, when you haven’t seen your home since, well, ever. I had an incredible time, and hope to get back there soon enough.

This Space Available was literally born from scribbled notes on scrap paper at a department store, which was where I was working when I was a struggling writer. Now, it is hosted on the National Space Society’s website, which I will always view as a massive honor. I would like to thank the NSS for the organization’s continued faith in me, my family, my fans, and those who supported my (sometimes nuts) vision throughout the last ten years. It only took several hundred blog posts, but my work finally improved. To the future!

The author asked a few space historians and authors for blurbs about This Space Available, on the occasion of its anniversary:

“The best writing comes when the author has a deep interest in what they are researching. Emily’s work comes from her wish to answer intriguing questions forgotten in the corners of space history. Always relatable, her articles are fun, irreverent, and illuminating – I learn a lot!” – Francis French, author of Falling to Earth (with Al Worden), Into That Silent Sea, and In the Shadow of the Moon (both with Colin Burgess)

“Over the last decade, I’ve had the pleasure of watching This Space Available evolve into an invaluable resource for those wanting to delve deep into sometimes marginalized and neglected areas of space exploration. Emily’s rigor, integrity, and unique voice makes hers one of the must-read blogs for any space aficionado.” – Lois Huneycutt, historian and moderator of Space Hipsters

“This Space Available is truly one of the most thoughtful, informative, and pioneering multi-author blogs in American aerospace. For ten years I have followed it religiously. I am a huge fan.” – James R. Hansen, author of First Man: The Life of Neil A. Armstrong, which later became an Academy Award-winning motion picture

“The history of space flight comprises tales of human and technical achievements as well as frustrations and failures. Every entry in This Space Available tells an engrossing and well-researched tidbit from the days of the Space Age and of the many high and low points on our way to space…and beyond. I grew up in the ‘60s and ‘70s, following it all avidly. Yet, I learn something new every time I read one of Emily Carney’s pieces!” – Carolyn Collins Petersen, author of The Discovery of the Universe: A History of Astronomy and Observatories, Astronomy 101, and many other titles

“A lot of history has been procedurally written-up in thick dry books, heavy with detail. Picking one up can be intimidating. And a commitment for the reader.

“Why not try more palatable, ‘fun size’ servings? And in a format where the writer is permitted to inject an opinion? I’m a fan of Emily Carney’s This Space Available for all these reasons and more.

“I enjoy her installment-based, general-interest, executive summary approach. And I appreciate how Carney’s solid journalistic footing still leaves room for the subjective, stage-whisper kind of asides that bring humor to the topic at hand. They’d detract from a lengthy hardbound version of the same material, but work well here, and have me coming back to read new posts. Thanks for doing what you do, Emily!” – Jay Gallentine, author of Ambassadors from Earth and Infinity Beckoned

“Do you want to have a deeper understanding of our future in space? Interested in learning more about the glories of the Space Age and how we got to where we are today? Are you fascinated by the unseen forces behind how we explore the final frontier? If so, you need go no further than Emily Carney’s This Space Available. You’ll find engaging, relatable stories about something we all care about – the exploration and settlement of space.” – Rod Pyle, author of Amazing Stories of the Space Age, Heroes of the Space Age, Space 2.0, and many other titles

“Emily Carney’s This Space Available has for ten years brought us the stories behind the stories – not the official versions with the shiny rockets and the impossible chins but the real stories with the real people who made our ventures into the cosmos happen. An unabashed spaceflight fan, she’s also down to Earth, and her thoughts about such disparate individuals as the intensely inward Neil Armstrong and the often outward Gherman Titov, and such dreamers and dissidents as Gerard K. O’Neill and Brian O’Leary, don’t stop at dates and other data but get at the thoughts and dreams that got these folks staring at the skies in the first place. A whole galaxy of fun for those of us with an eye for the odd, the adventurous, and the humorous, I’m hoping This Space Available will be around for at least the next ten years or until we get to Mars, whichever comes first!” – Bruce McCandless III, author, space enthusiast, and something of an astronaut expert