Vice President Pence Announces Humans ﻿on the Moon by 2024 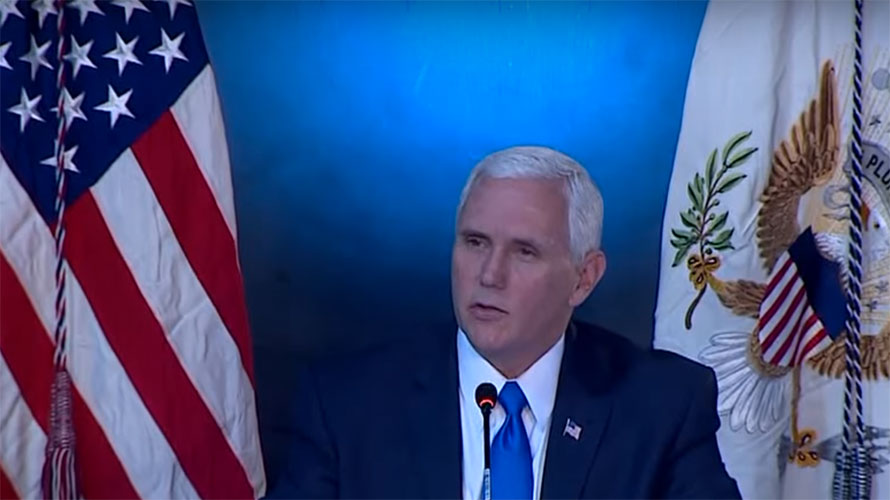 The National Space Society supports the administration’s efforts to accelerate the timetable for getting U.S. personnel on the Moon permanently. Chair of the NSS Executive Committee Dale Skran stated, “An accelerated return to the Moon should focus on the goal of mining the resources of the lunar polar regions and not simply putting boots on the ground. We need a reusable architecture that is cost-effective, not another one-shot space stunt.”

Vice President Mike Pence announced on March 26 the administration’s revised plans for Americans to return to the Moon within the next five years, as the 50th anniversary of the first crewed mission to the Moon approaches. Speaking at the U.S. Space and Rocket Center in Huntsville, Alabama, Pence stated that the earlier NASA-estimated year of 2028 for the next Americans on the Moon was “just not good enough.” He went on to urge NASA to set “bold goals” such as landing a crewed mission near the Moon’s South Pole, which scientists believe contains abundant water ice for fuel and life support.

NASA Administrator Jim Bridenstine echoed and expanded on Pence’s message by stating, “This time, when we go to the Moon, we will stay. And then, we will use what we learn on the Moon to take the next giant leap—sending astronauts to Mars.” Bridenstine will speak on NASA’s implementation plans at the International Space Development Conference (isdc2019.nss.org) presented by National Space Society in June.

NSS Executive Vice President Alfred Anzaldua added, “We also strongly support the administration’s increased use of commercial vehicles to help advance this timeline. A key step toward this is NASA moving beyond its current “Reference Architecture” for human-class lunar landers to a fully open commercial competition that allows alternative solutions from SpaceX and Blue Origin a fair chance to compete.”

On March 26th, Elon Musk tweeted, “Would be great to have a competitive, commercial program to build a moon base that is outcome-oriented (not cost-plus), so you only get paid for safe delivery of cargo.” NSS endorses such a program and believes that it is the only way the U.S. can get to the Moon within five years.

For more information about the National Space Society’s plan for space settlement, see the 2019 Third Edition of its Roadmap to Space Settlement at: space.nss.org/roadmap.