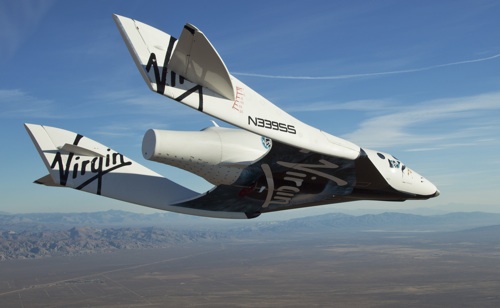 Commercial spaceflight took another step forward this past Sunday, 10 October 2010.

Virgin Galactic’s SpaceShipTwo, named Enterprise, was dropped from its mother ship at 45,000 feet and successfully completed maneuvers and landing at the test facilities in the Mojave Desert. Enterprise is designed to carry two pilots and six passengers to an altitude of over 100 kilometers.

Sir Richard Branson, founder of Virgin Group, who was present during the first successful flight, commented that “This was one of the most exciting days in the whole history of Virgin.

The flight was designed to test the release mechanics from the mother ship and then verify the handling and stall characteristics as well as the lift to drag ratio. A complete set of landing maneuvers were executed at a high altitude, and the ship then made its final descent and landing.

Scaled Composites pilot, Pete Siebold, said “The VSS Enterprise was a real joy to fly, especially when one considers the fact that the vehicle has been designed not only to be a Mach 3.5 spaceship capable of going into space but also one of the worlds highest altitude gliders.”

Virgin Galactic will continue testing the new rocket ship during the coming year, and expects to fly its first commercial passengers within 18 months.

George Whitesides, former Executive Director of the National Space Society and current CEO of Virgin Galactic, was also present at the historic flight. Whitesides said, “To see the world’s first manned commercial spaceship landing on a runway is a sight I always dreamed I would behold. Now, our challenge going forward will be to complete our experimental program, obtain our FAA license and safely bring the system into service at Spaceport America, New Mexico.”