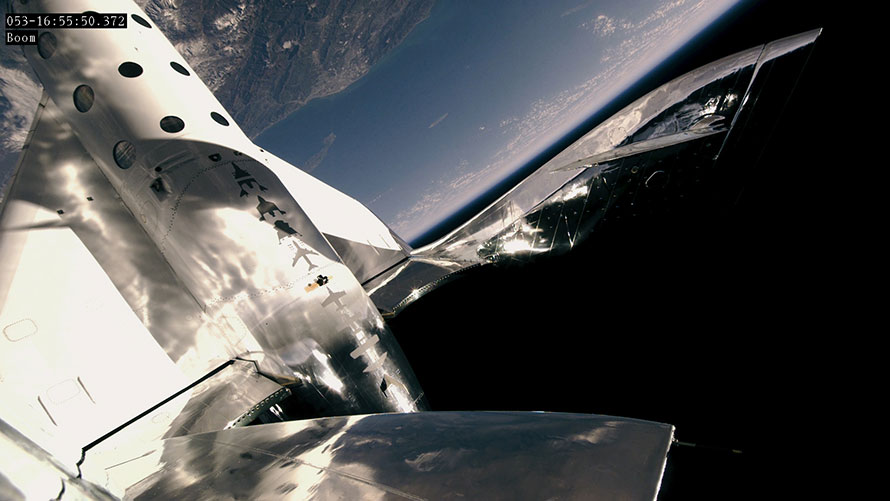 This morning Friday February 22nd Virgin Galactic’s piloted space plane VSS Unity (a.k.a. SpaceShipTwo) reached the black skies of space for the second time on its fifth supersonic powered test flight, but this time with three crew members on board instead of two.

The launch aircraft WhiteKnightTwo, with VSS Unity mated underneath the wings, took off from the runway at Mojave Air and Space Port in California at 8:08 am PST. After a flight of 45 minutes to about 44,000 feet, VSS Unity was dropped free and immediately started its rocket motor. Operated this time by Chief Pilot Dave Mackay and Pilot Mike ‘Sooch’ Masucci, the space craft powered up to Mach 3 (2,300 mph) and at about 8:54 am PST reached suborbital apogee of 55.87 miles (295,007 ft or 89.9 km). Re-entry began several minutes later with VSS Unity’s tail booms in the feathered position. Having retracted the tail booms at lower altitude during descent, the space craft then landed smoothly back on the runway at Mojave at 9:09 am, an hour after leaving.

As Virgin Galactic tweeted during the flight: “We have a 3rd crew member in the cabin of SpaceShipTwo today, Chief Astronaut Instructor, Beth Moses. She will provide human validation for the data we collect. Including aspects of the customer cabin and spaceflight environment from the perspective of people in the back.” She has extensive zero-g parabolic flight experience. This flight marked the first time for all three crew members to reach space, making them the 569th, 570th, and 571st humans respectively to travel to space. 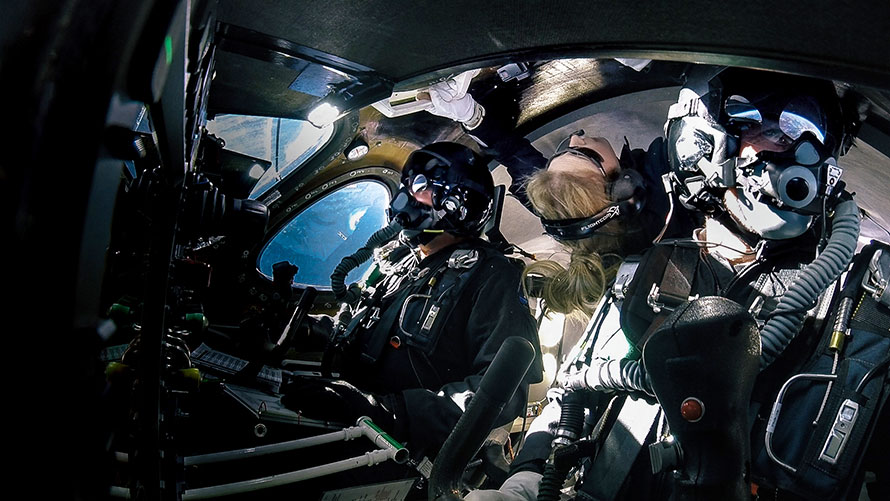 VSS Unity was a bit heavier and closer to full commercial weight than on the previous and first flight to space on December 13th, 2018. Additional flight data and operational experience, including with the vehicle’s center of gravity, was to be gathered. Also, for the second time there were several scientific payloads from NASA’s Flight Opportunities Program focusing on life support systems and electromagnetic fields, among others.

The apogee attained of 55.87 miles is basically the mid-point between the lower boundary of space of 50 miles (80 km) honored by U.S. federal agencies such as NASA, the U.S Dept. of Transportation (USDOT), and the Air Force, and the upper boundary of space of 62 miles (100 km) known as the Kármán line and recognized internationally by the Fédération Aéronautique Internationale (FAI) and the International Astronautical Federation (IAF).

Unity’s prior flight, its first to space, achieved 51.4 miles (271,268 ft or 82.7 km) apogee. Commercial Astronaut wings were subsequently awarded by the USDOT to the pilots of that flight Mark ‘Forger’ Stucky and ‘CJ’ Sturckow.

In a recent statement about the Kármán line regarding contention surrounding the acceptable “boundary of space,” the FAI said “Recently published analyses present a compelling scientific case for reduction in this altitude from 100km to 80km” and that they have “been in contact with the International Astronautical Federation (IAF) to propose that an international workshop is held during 2019 to fully explore this issue with input and participation from the astrodynamics and astronautical community.” The anticipated results of such a workshop should be interesting.

Richard Branson, founder of Virgin Galactic, has recently announced plans to make his first flight to space on the 50th anniversary of the launch of Apollo 11 on July 16th this year. That flight will mark the inauguration of commercial space tourist flights by Virgin Galactic, as well as mark the inauguration of flights by WhiteKnightTwo and SpaceShipTwo (VSS Unity) from the Spaceport America facility in New Mexico. It is not known at this time if there will be other non-crew space tourist passengers on board that flight.

A couple of days ago, Jeff Bezos, founder of Blue Origin, reiterated that they plan to start taking tourists on suborbital flights to space aboard their New Shepard rocket and capsule “this year” and, having already achieved multiple un-crewed suborbital flights with New Shepard above the Kármán line, also raised the contentious issue of the boundary of space.

Whether Virgin Galactic or Blue Origin is the first to ferry tourists to space, that flight will also mark the re-start of space tourism after orbital tourist flights and stays aboard International Space Station (ISS) were discontinued a decade ago in 2009.

Congratulations once again to the entire staff of Virgin Galactic and the VSS unity crew for this achievement today.