A petition to the White House to task the White House Office of Science and Technology Policy to examine space solar power (SSP) as a new energy and space goal for the U.S. has been posted on the White House WE the PEOPLE website, with a goal of 100,000 signatures by April 3, 2013.

WE PETITION THE OBAMA ADMINISTRATION TO:

Task the Office of Science and Technology Policy to examine Space Solar Power as a new energy & space goal for the US.

New concepts make it possible for solar energy to be harvested in space and delivered 24/7 to markets in the U.S. & globally. Space solar power (SSP) could supply vast new energy while addressing climate concerns.

SSP is now being pursued by other nations (e.g., China, Japan), and energy determines preeminence in space as on Earth.

But SSP falls between the charters of U.S. technology and space agencies (DOE, DOD, NASA), so it’s “no one’s job.” These agencies have existing responsibilities and stakeholders; they are not looking for new goals.

Only the White House (OSTP) working with Congress can change the policy gridlock in the U.S. and develop a plan to lead international R&D in this game-changing energy/space endeavor.

If you agree the U.S. should lead R&D on SSP, please support this petition.

“Harvesting solar power in space and delivering clean, inexhaustible energy to humanity has been a vision for more than 40 years,” Mankins, who is currently CTO of  asteroid mining company Deep Space Industries, explained to KurzweilAI. “Now, new technologies and new concepts exist that can transform this vision into a reality.

“Within a decade, perhaps less, the first solar power satellite made from mass-produced modules could be in operation, transforming everything we do in space and the future of energy on Earth. Space solar power is both technically feasible, and could be economically viable — but only if we act to make it so.” 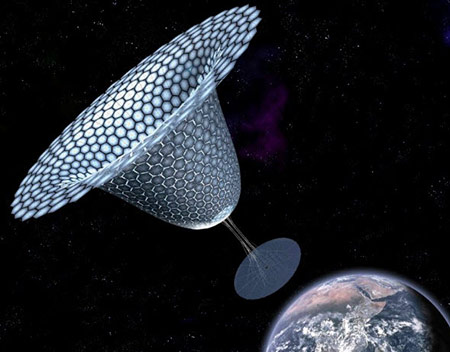 SPS-ALPHA would typically be based in a geostationary Earth orbit (GEO), where it would intercept sunlight using a collection of individually pointed thin-film mirrors, convert that sunlight into a coherent microwave beam and transmit the power to markets on Earth or in space.

And in 1995–1997, NASA conducted its Fresh Look study, a preliminary reexamination of the technologies, systems concepts and terrestrial markets that might be involved in future SSP systems.

A three-year, ten-nation study of space solar power in 2009–2011 by the International Academy of Astronautics (IAA), co-chaired by Mankins, found that SSP appears to be “technically feasible within 10–20 years using technologies existing now in the laboratory, and economically viable in the next 1–3 decades under several different scenarios for future energy markets, including potential government actions to mediate environment/climate change issues.”