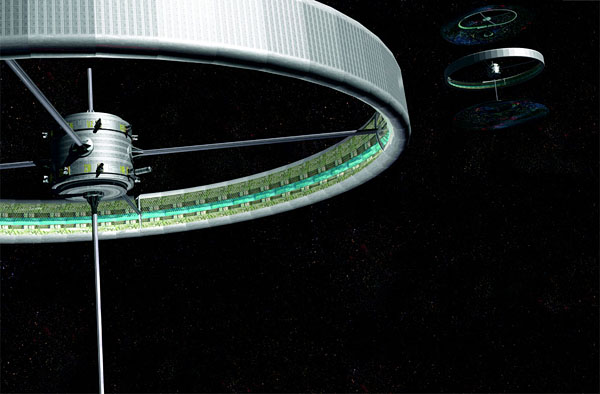 “I know that humans will colonize the solar system and one day go beyond”
— Mike Griffin, NASA Administrator

Alexander Bridi spent two summer vacations and much of the school year designing the space settlement — his idea of a great place to live in orbit. Alexander is in his last year in the European School of Brussels III. Now 16, he started work on the project at 14. His interests include astronomy, physics, math, music and tennis. Alexander was born in the United States and has since lived in Austria, France and Belgium, where he resides today.

He then sent his 88-page document to NASA Ames Research Center in California where he won the grand prize in the annual NASA Student Space Settlement Contest, the National Space Society’s Student Space Settlement Design of the Year award, and a ticket to the International Space Development Conference (ISDC) in Los Angeles. There he met dozens of space luminaries, including astronaut Rusty Schweichart and the new NASA Ames Center director, Pete Worden. The National Space Society’s reward? Alexander convinced Dr. Worden to ask for a formal collaboration between NSS and Ames to expand and improve the very contest Mr. Bridi had just won.

Space artist Dan Roam, working with Alexander Bridi, has created the spectacular image you see here, bringing the design alive. You’ll see that Alexander believes space settlement is of critical importance to the survival of our species, for access to the vast energy and resources of this solar system and to relieve the Earth’s environment of the burdens of industrialization. He also notes that tourism and entertainment are “commercially interesting.” Perhaps he foresaw the intense space tourism activity at ISDC. Alexander won the contest, not just because he created a long, beautifully produced document including his favorite bits about what is known about orbital space settlements; he also made a contribution to the state-of-the-art by optimizing the cross section of his toroidal design. It turns out that the shape of the living area for a small torus needs to be a bit different than for a large torus. In technical terms, he showed that a truncated ellipsoidal cross section is optimal for small-radii settlements, while a combination of two ellipsoids is superior for larger-radii settlements.

There will be another NASA Ames student space settlement design contest next year. The field is wide open. In addition to the grand prize, there are first, second and third in a number of categories for individuals and teams. So if you’re a student in the sixth through 12th grades, design a place in space for you, your friends and family to live, work and play. Write it up and send it to NASA Ames by the deadline. It doesn’t have to be long; it just needs to be a clear presentation of your best ideas about living in space. Background material is available [here].

NASA is looking forward to seeing your idea of a home in space.