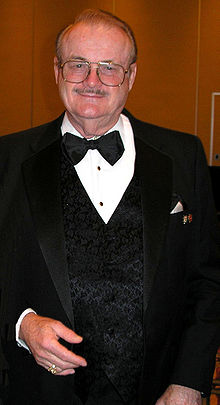 The 2016 Robert A. Heinlein Memorial Award recognized Dr. Jerry Pournelle’s many years of support for space science, exploration, development, and settlement and his close association with Robert Heinlein. He was active in NSS’ predecessor, the L5 Society, during its early years. Jerry served as co-chair of the very first ISDC, NSS Secretary, and as an L5 Society Board member.

Jerry was also chair of the Citizen’s Advisory Council on National Space Policy. This group was active during the 1980s and was one of the most effective groups promoting specific space-related policy positions at that time. Robert Heinlein was also an active member of that group. The group’s early support of missile defense eventually led to the perceived need for an inexpensive launcher. The briefing that he and two others gave to then-Vice President Dan Quayle was instrumental in getting the approval of the DC-X program, overcoming NASA’s skepticism about the project. Jerry was present at White Sands on September 11, 1993 when the first large rocket, the DC-X or Delta Clipper vehicle, was reused by being launched and safely landing a second time.

Jerry has consistently supported the vision of self-sustaining human settlements in space and on planetary surfaces, and as part of a free, spacefaring civilization, which is at the very heart of the space movement. Jerry’s work as a science fiction author, focusing on stories with realistic physics, has contributed to a better understanding of the limitations and the abilities of human space operations. Few have made such a rich contribution to these fields. 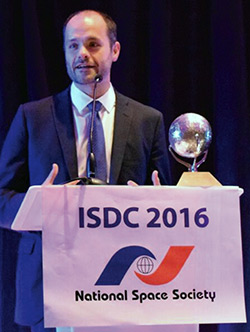 SpaceX is a winner of the 2016 Space Pioneer Award for Science and Engineering. Josh Brost (in photo), director of Government Business Development at SpaceX, accepted the award at the ISDC in the name of SpaceX.

This award recognizes the company’s recent major achievement, the flight of the Falcon 9R rocket on December 21, 2015, which fulfilled one of the major “holy grail” quests for the space community: reusability. This flight marked the first successful vertical landing by a large first-stage rocket, which reached space and whose second stage carried a payload into orbit. Creating reusable rockets is a fundamental requirement for spaceflight to be inexpensive enough for general and largescale use. It has also been a declared goal for SpaceX since 2011.

SpaceX was founded by Elon Musk in June 2002. It is working toward the first launch of its Falcon Heavy rocket in the Spring of 2017, with the first launch of astronauts on a Falcon/Dragon combination scheduled for late 2017 and a potential launch of an uncrewed mission to Mars in 2018. It is also developing a new commercial launch site on the Texas coast just north of the Mexican border. Its new Raptor rocket engine, with 310,000 metric tons of thrust, is currently undergoing tests at the McGregor test site near Waco, Texas. 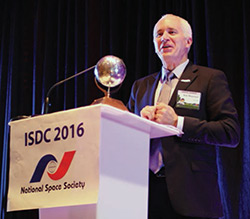 The entrepreneurial company Blue Origin is also the winner of the 2016 Space Pioneer Award for Science and Engineering. Rob Meyerson (in photo), the company’s president, accepted the award on Blue Origin’s behalf.

This award recognizes the company’s two recent major achievements: The first successful vertical landing by a large rocket, which has reached space and carried a payload (an empty passenger capsule that descends separately by parachute). This flight by the New Shepard vehicle occurred on November 23, 2015 at the company’s large test range near the remote West Texas town of Van Horn.

Subsequently, the same rocket was flown again and performed a second perfect landing in January 2016, which constituted the very first re-use of a large rocket that had reached space. Since the two flights, the very same rocket has flown again three more times, demonstrating several types of landing techniques with its sophisticated landing software.

Blue Origin is a privately funded company set up by entrepreneur Jeff Bezos. It designed and built the single stage New Shepard rocket as a means of developing a reusable vehicle and to provide sub-orbital launch services for passengers. It is developing a new methane and liquid oxygen fueled rocket engine, the BE-4, which will be used to power orbital rockets. The company’s name refers to the Blue Planet, Earth, the origin of humanity. 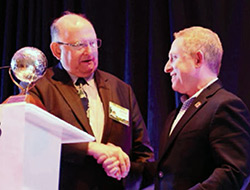 The New Horizons Team, which conducted the stunningly successful mission to and flyby of Pluto, is the winner of the 2016 Space Pioneer Award for Science and Engineering. The award was accepted by Dr. Alan Stern (in photo receiving award from Art Dula), the team’s principal investigator, and two other members of the mission team, Mission Systems Engineer Chris Hersman and Deputy Project Scientist Dr. Leslie Young.

The team is led by the Southwest Research Institute and Johns Hopkins University Applied Physics Laboratory. This award recognizes the team’s success in conducting a mission that has now lasted more than a decade, starting with the launch on January 19, 2006. Humanity went from seeing just a tiny dot of light to seeing a complex, geologically active world in just a few days during the flyby on July 14, 2015. Displaying a wide range of terrains, Pluto has been revealed to have multiple active processes on its surface, with huge ice mountains floating in what is believed to be a deep sea of soft, deformable nitrogen ice. There may be liquid nitrogen deeper beneath the surface. The ice has formed large arctic polygon-like convection cells covering wide areas of icy plains, which are very young and totally free of impact craters. In some areas, nitrogen glaciers flow out of the mountains into the icy plains. Real water ice volcanoes may also have finally been found. Pluto’s thin but compact atmosphere sports amazingly high haze layers and the rate of atmosphere loss is much lower than expected. Many other types of spectacularly patterned terrains are still unexplained, and as more images are returned from the spacecraft, Pluto and Charon’s very different forms of “geology” will continue to be a major scientific topic for years to come.

This mission has generated the largest public interest of any NASA mission in recent years, has completed NASA’s 50-year-long quest to reconnoiter all of the planets known at the start of the Space Age, and represents the furthest exploration of a world by humanity. 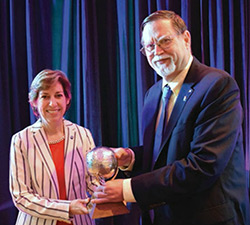 Dr. Ellen Ochoa is the winner of the 2016 Space Pioneer Award for Non-Legislative Government Service. She is shown here receiving the award from Mark Hopkins, Chair of the NSS Executive Committee.

This award recognizes Ellen’s career serving as a professional engineer, a shuttle astronaut, the first Hispanic woman in space, and subsequently in very important management positions in NASA, including her current position as the director of NASA’s Johnson Space Center.

After receiving a doctorate in Electrical Engineering from Stanford University in 1985, Ellen conducted research at both Sandia National Laboratories and NASA Ames Research Center. Her achievements include significant engineering work in optics, in information (signal-to-noise) in images, and as chief of the Intelligent Systems Technology Branch at NASA Ames. She also served as a shuttle astronaut for more than a decade, making four flights from 1993 to 2002. Ellen then served as deputy director and director of Flight Crew Operations at Johnson Space Center, focusing on the Astronaut Office and Aircraft Operations, and later as deputy center director. Then, on the first day of 2013, Ellen became the director of Johnson Space Center, a position she currently holds. Johnson Space Center has been the nexus of human spacecraft operations for most of NASA’s history. Ellen’s directorship of Johnson Space Center will have a significant impact on the future of human spaceflight. 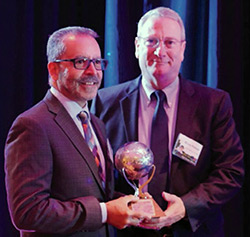 Orlando Figueroa is a winner of the 2016 Space Pioneer Award for Non-Legislative Government Service. He is shown in photo (on the left) accepting the award from NSS Senior Vice President Bruce Pittman.

This award recognizes the work he has done at NASA Goddard Space Flight Center and NASA Headquarters, including serving as the NASA deputy chief engineer, director for Mars Exploration, and other important positions at Goddard in engineering, management, and as a deputy center director for Science and Technology. “It is an honor to be recognized for whatever contribution I and the NASA teams I was privileged to lead made to the exploration of space and to science, and to be able to enjoy as much,” Orlando said.

After starting work at the Goddard Space Flight Center in 1978, Orlando served as manager and director of a very wide variety of programs. His work on cryogenics may assist future development for storage and the transfer in space of liquids as rocket propellants. Cryogenic storage and transfer technology enables reusable in-space vehicles and routine space operations. NSS especially appreciates his many accomplishments during his years as director for Mars Exploration. Just five years after the double failures of the 1998-9 Mars missions, Orlando led the double successes of the Spirit and Opportunity Mars Exploration Rovers. These were dramatic comebacks for NASA and the planetary program. These programs are vital for both basic planetary science and to provide climate and geological information about Mars for future human exploration. The confidence-building successes of the Mars Exploration Rovers led directly to the development of the Mars Science Laboratory rover Curiosity, and the Opportunity rover is still collecting vital geological information 12 years later. 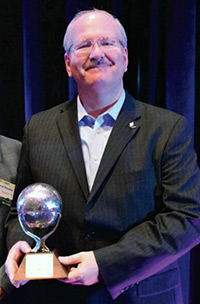 National Space Society Governor Jeff Greason is the winner of the 2016 Space Pioneer Award for Entrepreneurial Business. This award recognizes Jeff’s successes in founding and helping manage and direct technical work at XCOR and other entrepreneurial space companies. It also recognizes his bold spirit in founding Agile Aero, Inc., a new company that will seek to break through a rapid prototyping barrier that has slowed aerospace development for the last several decades.

Jeff’s achievements include being one of the four co-founders of XCOR and leading the engineering team that developed 10 different long-life, highly reusable liquid-fueled rocket engines, a low-cost liquid propellant piston pump, and two manned reusable rocket aircraft, including the EZ-Rocket. Agile Aero (www.agile.aero), which Jeff recently founded with several other XCOR employees, is intended to help speed up the typically long vehicle development process that strains the finances and resources of many aerospace companies. He expects the results to aid other companies in making their visions a reality. The company is located in Midland, Texas. Jeff was also a member of the president’s Human Space Flight Review (Augustine II) Committee in 2009. Jeff presented a memorable speech regarding the future of space settlement at the ISDC 2011 in Huntsville. That speech can be viewed here and has over 11,000 views so far. 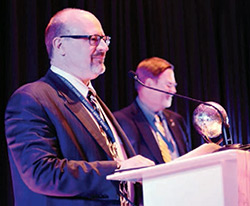 Dale Skran is the winner of the 2016 Chris Pancratz Space Activist of the Year Award. Dale is a member of the NSS Board of Directors, Chair of the NSS Policy Committee, and NSS Executive Vice President. Dale is also one of two NSS representatives to the Alliance for Space Development. One of his major work areas is supporting the Space Exploration Alliance Washington Blitz in February, the March Storm, and the NSS Home District Blitz in August. He also chaired the Space Policy Track at the 2014 ISDC®. He has written a number of articles for Ad Astra, including “A Summer in Newspace” (Winter 2013).

After 17 years with Bell Labs (AT&T, Lucent Technologies), Dale worked in several companies including Ascend Communications (VP of Enterprise Engineering), Sonus Networks (director of Engineering), and CMWare (founder, CEO, COO, and VP of Engineering). He was also a negotiator/manager (Rapporteur) at the UN (International Telecommunication Union), where he led the development of international Internet standards for video conferencing and voice services (VoIP).