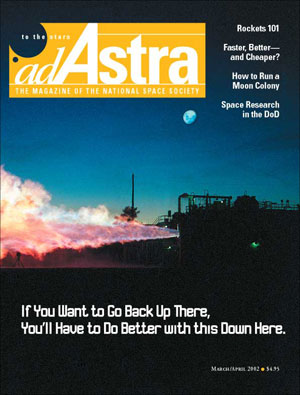 ON THE COVER: Nighttime test firing of a candidate upper stage engine for the future Evolved Expendable Launch Vehicle (EELV) is done at the U.S. Air Force Test facility at Arnold Engineering Development Center just outside Memphis. The test, done in 1997, was a success. The first EELV rockets will start flying this summer. Photo: courtesy AEDC.

12
The Future of Rocket Science
New rockets and systems are under design and development today. They promise advances in the way we explore the Solar System and the universe.
By Jeff Foust

16
Riding the Vasimr Rocket
JSC engineers are working on a truly radical way to send astronauts to deep space destinations.
By Eugene Cervone

28
Selling the Moon
Lunar entrepreneurs are hard at work crafting machines and businesses that could flourish in the Moon’s dusty soil.
By Richard Wagner

32
Lunar colonization: Why, How and When?
What will constitute a lunar base? Who will work there, and what kinds of projects would be best? The idea is not as far out as you might think.
By Niklas Javstrat

35
Makin’ That MoonMud!
Moon soil has the potential for becoming the future building block of construction on the Moon.
By John Wickman

37
Tales of a Mars Mission Medical Emergency
The Mars Sim team recently tested their ideas in a dress rehearsal of what may await on the Red Planet.
By Eleanor A. ORangers

40
Space Research in the DOD
In addition to communications, early warning, and navigation, basic research programs are part of the Pentagon’s space plans.
By George Carruthers