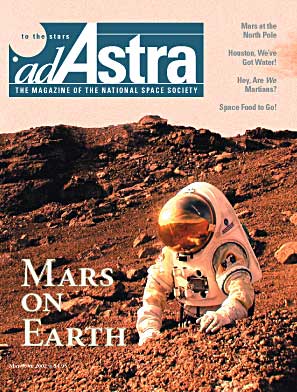 Return to Back Issue Index
ON THE COVER: An HMP scientist in Hamilton-Sunstrand’s concept spacesuit for advanced planetary exploration testing out new information technologies in support of field geology on EVA. Such EVA research for future space exploration will continue on the HMP with support provided in part by the National Space Society. Photo: NASA HMP 2001/Pascal Lee.

12
Mars on Earth
Preparing for Mars in a unique public/private and international setting.
By Pascal Lee, SETI Institute

18
Earth on Mars
Bringing a slice of Earth with us as we explore and settle Mars.
By Keith Cowing, SpaceRef Interactive

22
“Houston, we’ve got water!”
A report from the Lunar and Planetary Science Conference in Houston, Texas.
By Pat Dasch

26
Astrobiology on Mars: under pressure and in hot water
Looking for life in extreme environments.
By Michael Meyer, NASA Headquarters

30
Two dry for life: The Atacama Desert and Mars
Too hostile for Earth microbes, the Atacama is a good simulation of Mars.
By Christopher P. McKay, NASA Ames Research Center

34
Hitchhiking on a Meteorite: Is there Mars Life on Earth?
Q: Are we Martians?
By Keith Cowing, SpaceRef Interactive

37
Space food: Chicken ala King anyone?
Food traveling into deep space has to provide excellent nutrition, be safe, easy to digest, and appealing to the crew.
By Lakshmi Sandhana

40
Solar Sails
The Next Best Way to Get There?
By Diana Whitman