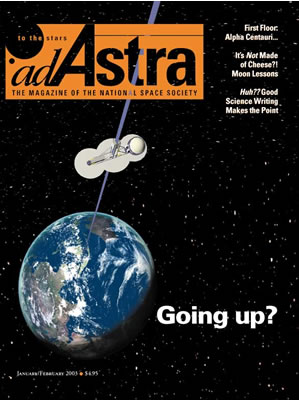 Return to Back Issue Index
ON THE COVER: What if there was an elevator to space? One end solidly on terra firma. The other some 22,500 miles up. The space elevator may be an idea whose time is, while maybe not today, just around the corner.

16
THEY DID THAT MOON THING: WHAT DID WE LEARN ABOUT THE MOON BY GOING THERE?
The Moon project gave birth to some of the most fundamental and profound scientific discoveries about how our world came into existence.
By Irene Brown

20
SPACE POWER!
A look back and ahead at Congressional power over U.S. civil space activities.
By James A. Vedda

24
INTERSTELLAR TRAVEL: THE POSSIBILITIES
Future-tech that just might get us to the stars.
By Laura S. Woodmansee

30
A STARSHIP TO VISIT A NEIGHBOR
If (and when) an Earth-like planet is discovered, there will be tremendous interest and support for contacting it directly. That mission starts now!
By Clark S. Lindsey

36
COMMUNICATING SPACE WITH SCIENCE WRITING
Good science writers are able to make people feel comfortable in the world of science even when theyre not science literate.
By Dana Whitman