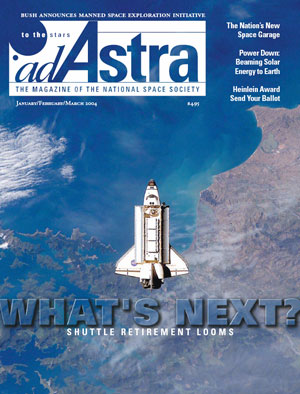 Return to Back Issue Index
ON THE COVER: Space shuttle Endeavor over Cook Strait, New Zealand, during approach to the International Space Station on November 25, 2002. Photo: NASA.

16
REKINDLING THE DREAM
President George W. Bush outlines an initiative that puts us back on the Moon by 2020. And from there, on to Mars…
By Frank Sietzen, Jr.

18
THE VISION THING
After floundering for decades, the U.S. space program has a new mission and a broader vision.  But will it be enough to get us where we want to go?
By Jeff Foust

22
IN SEARCH OF PLANETS AND LIFE
When it comes to stars like our sun, planets may be the rule rather  than the exception.  A new flock of space telescopes will help scientists home in on the Earth-like worlds.
By Erik Baard

26
THE CASE FOR SOLAR POWER FROM SPACE
There’s an awful lot of energy to be had out in space.  Why we should be looking to solve Earth’s energy crisis by harvesting power from the sun.
By Arthur P. Smith

34
AMERICA’S NEW SPACE CATHEDRAL
The expansion of the Smithsonian Air and Space Musuem in Dulles, Virginia, is a space buff’s dream. A look inside the new museum.
By Keith Cowing,  photos by Jeff Foust

15
COUNTDOWN
The Winds of Change
By Irene Mona Klotz, Editor in Chief