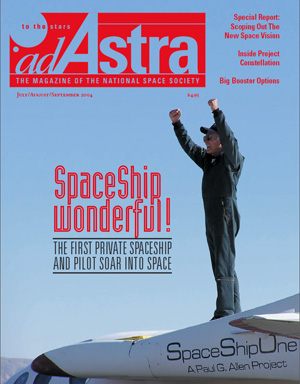 Return to Back Issue Index
ON THE COVER: Scaled Composites’ SpaceShipOne returns from its short but historic venture into space.

S1
MOON, MARS AND BEYOND:
SPACE EXPLORATION FOR A NEW ERA
Special Report

S4
THE U.S. BLUEPRINT FOR SPACE EXPLORATION
The Aldridge Commission Report: The remaking of NASA is only part of the job; the real test will be sustaining the vision over decades to come.
By Jeff Foust

S7
FIRST MAN ON THE MOON LOOKS FORWARD TO OTHERS’ RETURN
Speech by Neil A. Armstrong

S9
INSIDE PROJECT CONSTELLATION
NASA’s first step beyond low-Earth orbit begins with a new vehicle to transport cargo and people to the Moon.
By Frank Sietzen, Jr.

S13
LAUNCH OPTIONS LOOM LARGE FOR NASA’S NEW MISSION
Engineers are studying a variety of options for developing new, more affordable heavy-lift rockets to carry astronauts back to the Moon and on to Mars.
By William Harwood

S18
ONE WAY TO MARS
Going to Mars to stay.
By Lucian Samosata

S23
THINK SMALL
As plans shape up for robotic excursions to the Moon, NASA may want to consider that bigger isn’t necessarily better.
By Jeff Foust

S3
COUNTDOWN
Over the Thorns, To the Stars
By Irene Mona Klotz, Editor in Chief