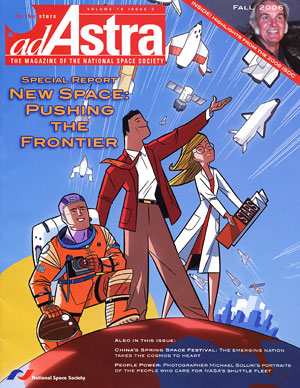 14
CHINA’S SPACE SPRING FESTIVAL
People from various walks of life throughout southern and central China were interviewed to try and understand their feelings about the Chinese space program.
By David Cotter

19
PEOPLE POWER
Inspired by their work and dedication to the nation’s space program, writer and photographer Michael Soluri received permission from the United Space Alliance to photograph the men and women who work behind the scenes to keep NASA’s shuttle fleet space-worthy.
By Michael Soluri

25
DESTINATION MARS:
PAVING THE ROAD TO THE RED PLANET
Introduction by Leonard David

29
NEEDED: GOLD TO PAVE THE SPACE ROAD
The problems facing space start-ups can be compared to those that affected biotech ones in the past.
By Joan C. Horvath

32
SPACE TOURISM OPTIONS FOR TODAY AND TOMORROW
Paying for the trip is only the beginning. Depending on the type of trip the space traveler has booked, health issues and intensive training could make the dream vacation feel like work. But then again, Club Med is so 20th dentury.
By Bjorn Carey

36
BETTER SAFE THAN SORRY:
BUILDING A BIOCONTAINMENT BASE ON THE MOON
Mankind will eventually have robotic and human missions on the Moon, Mars, asteroids and the outer planets, but bringing safe samples from those places back to Earth is going to require a way station to ensure our safety from unknown and alien threats.
By Frederick I. Moxley

24
OPINION
Why We Need NASA’s Commercial Orbital Space Transport Services Program
By helping entrepreneurs, the United States’ space agency may finally be helping itself.
By Dr. Charles A. Lurio

43
COMMUNITY
Thinking Outside the Box
By Gary Barnhard, Chairman of the Executive Committee

48
SIGNING OFF
To Boldly Go: Forty Years of Star Trek
It seems like the TV show that never dies.
By Tariq Malik