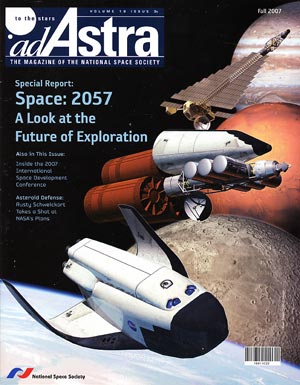 14
FAIR WARNING, DEADLY RESPONSE
In 2005 the U.S. Congress asked NASA to look into the asteroid threat to Earth, but the agency’s report has Near-Earth Object hunters raising more questions.
By Leonard David

18
WORLDS BEYOND:
BRINGING EXTRASOLAR PLANETS CLOSER TO HOME
The National Space Society teamed up with NASA and Northrup Grumman to bring the wonders of the cosmos closer to home.
By Cassie L. Kloberdanz

24
NASA: THE NEXT 50 YEARS
Despite limitations in time, technology and money, the United States’ premier space exploration agency will continue to think of bigger and bolder missions.
By Jeff Foust

26
IS THERE A BORG IN OUR FUTURE?
In this excerpt from their forthcoming book Robots in Space: Technology, Evolution, and Interplanetary Travel, the authors describe a future where man and machine are one.
By Roger D. Launius and Howard E. McCurdy

28
FUTURE SHOCK:
ALTERNATIVE SPACE TRANSPORTATION FOR THE NEXT 50 YEARS
The key to the successful exploration of our solar system depends on humanity’s ability to harness new technologies.
By John C. Mankins

32
GOING NATIVE ON MARS
Metallic cities on alien worlds may sell science fiction comics and movies, but for humanity’s first pioneers, communities will grow from the soil and sand of their new home.
By Bart Leahy

20
OPINION
The Future of Freedom in Space
By William Bruner

38
BOOK REVIEWS
Rocketeers: How a Visionary Band of Business Leaders, Engineers, and Pilots is Boldly Privatizing Space
Reviewed by Alan Boyle
A Ball, a Dog, and a Monkey: 1957—The Space Race Begins
Reviewed by Robert Z. Pearlman

39
COMMUNITY
Future History: How the Space Movement Changed Our Future
By Gary Barnhard, Chairman of the Executive Committee

48
SIGNING OFF
Sputnik’s Legacy
So much changes in so little time. In the 50 years since the first human satellite was launched, humanity has changed, hopefully for the better.
By James Oberg