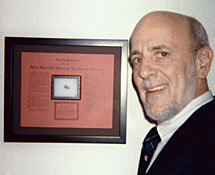 Alan Wasser is shown above with a small piece of Martian “real estate” he already owns — a piece of the Martian meteorite that landed in Zagami, Nigeria in 1962.

Mr. Wasser served as Chairman of the NSS Executive Committee from 1991 to 1994, and held a variety of other executive level positions from 1990 to 1996.  Active in both the National Space Institute and L5 Society since 1980, Mr. Wasser was also President of New York City L5 in 1981 and 1982.  He is a former member of the Boards of Directors of ProSpace and the NYC NSS chapter, and has been a Senior Associate of the Space Studies Institute since 1984.

Mr. Wasser came to NSS from a background replete with diverse interests. As an undergraduate at New York University, he majored in both Political Science and English.  His work there was sufficient to garner as invitation to join Phi Beta Kappa.  He has also studied at the Massachusetts Institute of Technology, focusing there on physics with a particular interest in astronautics.  Through the U.S. Peace Corps intensive course at U.C.L.A., Mr. Wasser completed a course of study on the peoples, politics, and customs of Africa.  He is also a member of the Political Science honorary society, Pi Sigma Alpha.

Mr. Wasser’s broad interests and talents have led to a unique combination of career paths. For 11 years, he owned and operated a successful international export business firm.  Prior to that, he pursued a career in broadcast journalism for 13 years.  Numerous successes in those fields polished his writing and research skills, as evidenced by his career “moonlighting” as a space journalist and author (with Subotnik, Summer, & Kassen) of “Genius Revisited: High IQ Children Grow Up,” published in 1993 by Ablex Publishing.

Mr. Wasser has published a series of articles proposing U.S. land claims recognition legislation to get private enterprise to settle the Moon and Mars. This was developed in publications such as “A New Law Could Make Privately Funded Space Settlement Profitable” in the July 1997 Ad Astra and in the Explorers Journal, the official publication of the Explorers Club (v76 n1, 1998).

Mr. Wasser’s 1990 Ad Astra article, “Power Tower,” suggested that lunar settlement might best be established on a permanently sun-lit mountaintop at the Lunar pole.  He followed up several years later with the “Most Valuable Real Estate Off Earth,” in the May 1995 Ad Astra.  This article predicted such a mountaintop at the Moon’s south pole, with an ice lake at its feet.  Fellow NSS member, Ben Bova, has since written a wonderful novel, Moonrise, which involves an intense Japanese/American competition to claim ownership of just such a mountain at the Moon’s south pole.  Mr. Bova was kind enough to call the mountain “Mt. Wasser”.