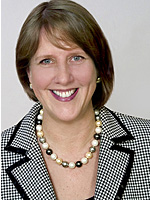 Alice M. Hoffman is former President and member of the Board of Directors of the National Space Society. She is a professional engineer and project/program manager who runs her own company, Hoffman Management Partners, specializing in managing complex design and construction projects. She was the developer’s representative for Chicago’s Soldier Field, managing the project from concept and business case through completion, selecting and holding the contracts for the architects and contractors, and meeting all the client’s goals, including the fastest ever completion of a professional football stadium.

She also managed Chicago’s citywide disaster preparedness plan for biological attack, preparing plans for 103 public centers, and prepared Chicago’s initial bid for the 2016 Olympics, which won over competition from five other US cities. Other programs managed include NY city and state hospitals, the Baltimore football stadium and transit-oriented downtown development, and expansion of O’Hare Airport.

In 2012 she formed strategic partnerships with Seventh Generation Renewables and Bergey Wind Power to bring sustainable wind and solar power into remote areas of Chile.

Alice is an MIT graduate, completing bachelor’s and master’s degrees in civil engineering and management in a total of four and a half years. She has worked with the American Society of Civil Engineers on data needed to design future Moon bases or settlements. She has been an NSS member from its early days and is an NSS Visionary Donor.

Her latest goal is to make the Enterprise in Space program successful as a draw for members of NSS and as proof of a revolutionary educational concept that could bring the best possible education to students everywhere.