The Bruce M. Clark, Jr. Memorial Scholarship was presented annually to the grand prize winner(s) of the NSS/NASA Ames Space Settlement Design Competition. The first presentation of the scholarship award was given at the 2010 International Space Development Conference (ISDC) in Chicago. The award scholarship was presented through the 2018 ISDC by Bruce M. Clark Sr. during a special awards dinner. Beginning in 2019, the award is being replaced by a $5,000 Herman Rubin Award. 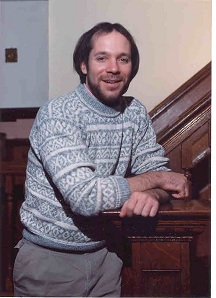 Bruce M. Clark, Jr., grew up in Norwalk, CT and graduated from The King School in Stamford. He had always been interested in science fiction and space settlement. Even as a young child, Bruce’s fascination with exploration and engineering was obvious and all encompassing. He always wanted to know more about the world around him and its myriad life forms; for Bruce, a day at the beach was a day spent turning over rocks and collecting the fascinating oddities he found there.  He was filled with questions about where and how these many life forms originated and would create little colonies and structures to support them so he could understand things so different from human life.

Starting as a teenager, Bruce had become an avid Science Fiction book collector. If the NSS/NASA Ames Space Settlement Design Contest had existed when Bruce was in high school, he certainly would have entered it.  Everyone he worked with at NEC knew he was inspired by Sci Fi ideas, but no one had ever seen the 3000 books he had purchased and indexed in his apartment. Those books have been used as the seed money for the founding of the Memorial Fund that honors his memory.

In the early 1990’s, Bruce joined the National Space Society and attended a large number of space conferences. His handwritten journals contain large numbers of references to space science, especially space settlement. Here are two of them:

Bruce M. Clark, Jr. was 47 years old when he died and his ashes have been placed into orbit around the Earth in his memory. The Clark family and friends wanted to honor his dreams about space travel and hope that supporting this competition will inspire young people to strive to creative heights. The Space Settlement Design Contest is, in a way, the perfect forum to apply the whole of his Memorial Fund. The Clark’s are impressed by the contest and proud to be funding the very first scholarship for the winners. And the topping on the cake was the honor of being able to actually give the prize and meet the winners.

Discovering the world of science fiction allowed Bruce’s intelligence and creativity to soar. The Space Settlement Design Contest allows students to begin a lifelong quest to the stars. Perhaps the creation of the Bruce M. Clark, Jr. Award will help budding young space scientists and engineers to be inspired to carry on Bruce’s legacy and continuing his dream.

The gryphon has been chosen to represent the Bruce M. Clark, Jr. Memorial Scholarship Award. A powerful mythical creature with the head, forelegs, and wings of an eagle, and the body of a lion. The gryphon has long symbolized the union of the earth and the heavens, and humankind’s desire for knowledge and understanding of both. A beautiful holographic pendant of the gryphon was found among Bruce’s personal effects, and remains in the treasured possession of his family.