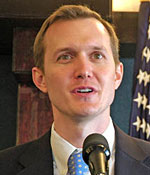 George T. Whitesides is a former Executive Director of the National Space Society, one of the largest grassroots space advocacy groups, with thousands of members and more than 50 chapters around the world.  Founded in 1974 by Apollo program leader Dr. Werner von Braun, NSS advances space through educational and technical projects, mass media, the annual International Space Development Conference, and policy advisement to leaders in government and industry.

Whitesides serves as Chairman of the Reusable Launch Vehicle Working Group for the FAA’s Commercial Space Transportation Advisory Committee.  He serves on the board of Astronomers Without Borders and the Space Generation Foundation, as well as the Advisory Committee of the Secure World Foundation.  He is a member of the National Research Council Space Studies Board’s Committee on the Rationale and Goals of the US Civil Space Program.  He has served on the Board of Trustees of Princeton University.

Whitesides is a senior advisor of Virgin Galactic, a new venture founded by Richard Branson’s Virgin Group to expand access to private space travel.  Whitesides began his career at Orbital Sciences Corporation as executive intern and subsequently special assistant to the president. Since then, he has served as Vice President of Marketing for Zero Gravity Corporation, a private space-tourism company, and Director of Marketing for Blastoff Corporation, a space-experience company funded by film and technology leaders.

Mr. Whitesides was the co-founder and director of Permission to Dream, a global space education program that donates telescopes to underprivileged children.  With Loretta Hidalgo Whitesides, he co-founded Yuri’s Night, an annual global celebration of space that has been celebrated in over 50 countries.

Whitesides has testified on American space policy before the United States Senate and the President’s Commission on Implementation of United States Space Exploration Policy.   Whitesides maintains an active speaking schedule, regularly appearing at a variety of conferences, universities and events.  An active writer and commentator on space and exploration issues, Whitesides has appeared on CNN, NBC, NPR, Fox, BBC, VOA, MTV, CBC, and many other print and television outlets. Whitesides was selected by Space News as one of twelve ‘People to Watch,’ joining a list that included Jeff Bezos and Elon Musk.

Mr. Whitesides received his undergraduate degree in public and international affairs with honors from Princeton University’s Woodrow Wilson School, a masters degree in geographic information systems and remote sensing from the University of Cambridge in England, and was selected for a Fulbright Scholarship.  Whitesides is a licensed private pilot and certified parabolic flight coach.