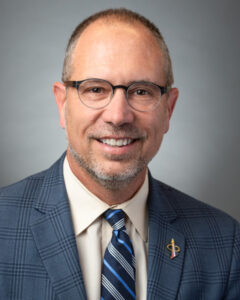 While serving on the NSS Board of Directors and Vice President of Space Development, Dr. Greg Autry was nominated by the White House to serve as Chief Financial Officer at NASA in July of 2021. He was confirmed by the committee in December 2021, but due to events of 2021, his nomination was never brought to a floor vote for the full Senate.

Dr. Autry is an educator, writer, technology entrepreneur and advocate for space settlement. As Clinical Professor of Space Leadership, Policy and Business in the Thunderbird School of Global Management at Arizona State University he leads the world’s first degree-program in the business of space. He researches and publishes on space commerce, entrepreneurship, technology innovation and trade policy.

Dr. Autry is a firm believer in humankind’s future in the solar system. He has been conducting research in the New Space / commercial space industry since 2003. Dr. Autry writes and comments regularly on space topics and serves on the editorial board of the New Space Journal. He served on the NASA Agency Review Team and as interim White House Liaison to NASA during the Presidential transition. He is also a member of the Commercial Space Transportation Advisory Committee (COMSTAC) at the FAA.

Dr. Autry’s insights on space and other topics have been published in major news outlets including the San Francisco Chronicle, LA Times, Washington Times, Wall Street Journal and SpaceNews. He has been featured on CNN and the BBC. He is a regular Forbes Contributor. Dr. Autry has testified to the U.S. Congress and has presented at the Canadian Parliament. He has spoken at the Heritage Foundation, the National Association of Business Economists, The National Press Club, the AIAA Space conference and the California Democratic Party Convention. Dr. Autry speaks at conferences on space, security, investments and at corporate events.

Dr. Autry holds a BA in history from Cal Poly Pomona as well as an MBA and a PhD (public policy and econ) from the Merage School of Business at UC Irvine. Dr. Autry’s dissertation research studied the influences of government on entrepreneurial environments within the context of the emerging commercial space industries.

Dr. Autry is the co-author of the book Death by China and a producer on the documentary film Death by China (directed by P. Navarro and narrated by Martin Sheen). Dr. Autry is a vocal critic of the appeasement of state dominated economies and totalitarian regimes. He is an unabashed advocate for global democracy, capitalism and human rights. He strongly advocates exporting the American model of economic and individual liberty around the globe and into the solar system. He supports increasing funding for exploration and development engaging both entrepreneurial and traditional approaches to space settlement.