Humanity Takes a Major Step Towards the NSS Vision

Promoting the spread of key ideas is at the core of the Strategic Plan of the National Space Society. One of these ideas, which we have promoted for more than 35 years, is that the vast majority of the resources of the Solar System are in space rather than on Earth. On April 10, 2013 NASA announced a new mission: to capture an asteroid and bring it back to an orbit about the Earth loosely similar to that of the Moon. At this location, it can be easily examined by astronauts. In terms of our ideas, what is important is not the mission per se, but one of the three reasons given by NASA for the mission. This was “To learn how to best utilize space resources.” (See page 2 of NASA’s FY2014 Asteroid Strategy). Never before has NASA, or an entity with the prestige similar to NASA, acknowledged with such strong and credible emphasis the importance of asteroid resources.

The size of asteroid resources is incredible. Just one medium-sized asteroid, 3554 Anum, has been estimated to contain platinum group metals worth, at today’s prices, more than $20 trillion. That is greater than the entire national debt of the United States.

The asteroids have enough material of roughly the right composition to build O’Neill space settlements, which have a combined land area of more than 1,000 times the land area of Earth—land area which greatly exceeds the average quality of land on Earth. If this new land was populated at the same density as the Earth today, then the human population would exceed 7 trillion.

The use of asteroid material to build space solar power satellites (SSPs), rather than using only materials that need to be launched at great expense from Earth, has long been recognized as a method by which SSP costs might be substantially reduced. Thus the asteroids may play a key role in solving Earth’s energy needs. While asteroid resources are enormous, it is also important to remember that they are tiny compared to the total of space resources available in the Solar System.

It is hard to over-emphasize the power of ideas. Via the promotion of key ideas, NSS is having an enormous impact on the path that humanity is following towards the future. The arena of ideas about the human future is currently dominated by predictions of doom and gloom. The Earth has limited resources: We are close to those limits and therefore we need to make decisions now to prepare for a future of poverty, scarcity, and decline—or so the argument goes.

But thanks in large part to the efforts of NSS, this is beginning to change. The truth is that the limits of Earth can be overcome by space resources. What is needed now is not preparation for decline, but acceleration of humanity’s drive into space. NASA’s acknowledgement of the importance of asteroid resources will be used by NSS as a powerful argument in the ongoing war of ideas about human destiny. 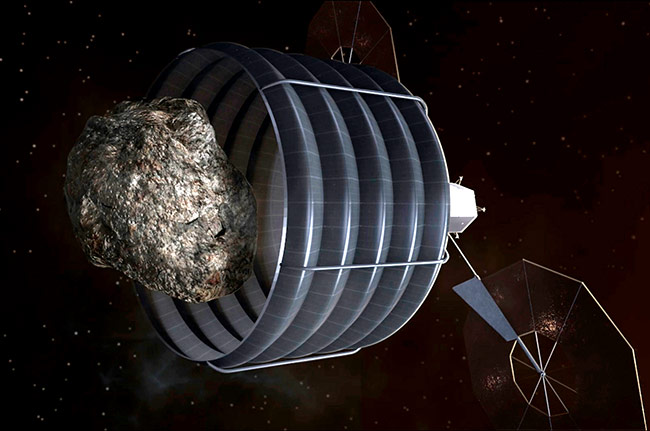 Mark Hopkins is Chairman of the Executive Committee of the National Space Society. This article originally appeared in Ad Astra, Summer 2013.

The Space Movement: Contents
Next article:
Space: We Want All of the Above