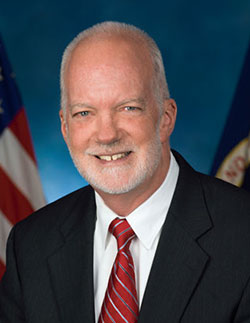 In 2018 John B. Charles, Ph.D., retired from a 35-year career at the NASA Johnson Space Center (JSC). A graduate of Ohio State University, he earned his doctorate in physiology and biophysics from the University of Kentucky. As a postdoctoral fellow, he began his NASA journey at JSC in 1983 in the medical research branch. He became a civil servant in the cardiovascular laboratory at JSC in 1985. He is retiring as Associate Director of NASA’s Human Research Program (HRP) for Exploration Research Planning. Prior to that position, Dr. Charles was the Chief Scientist for HRP.

As a child, Dr. Charles avidly followed the “space race” and was particularly enamored with the journey of Astronaut John Glenn. “At about age 10, I decided to quit dreaming and actually focus on a career in the space business,” Charles said. Through his academic studies, he realized the best way to combine his interest in biology with his desire to do space-related work was to pursue a career as a research physiologist.

Dr. Charles spent a large part of his lab career at JSC looking at the problem of orthostatic intolerance, the feeling of faintness astronauts experience on their return to Earth from orbit. Charles and his team helped to formalize a postflight test of orthostatic function and developed the technique of combining drinking water and salt tablets during lower body negative pressure (LBNP) to restore body fluids and pull them out of the upper body and back into the lower body.

Dr. Charles describes a high point of his career with NASA: “I have to rate as one of the highest the chance to work with John Glenn, because he inspired me way back in 1962 to be interested in spaceflight. Then 36 years later, when he flew on the shuttle, I dealt with him on a fairly regular basis to prepare our experiments for him to do in flight. It was always a thrill for me to see and speak to him. It was sort of a full circle, going from being inspired by him to working with him and having him consider me a part of his team.”

As Chief Scientist of the Human Research Program, Dr. Charles’s later years at JSC focused on the One-Year Mission. For that mission, beginning in March 2015, Astronaut Scott Kelly and Russian Cosmonaut Mikhail Kornienko spent one year on the International Space Station (ISS) to advance research of medical, psychological, and biomedical challenges of humans on long-duration missions. He also oversaw the associated Twins Study of Scott and Mark Kelly.

Dr. Charles is a Fellow of the Aerospace Medical Association and a Full Member of the International Academy of Astronautics. He has published over 60 scientific articles, and has received several professional awards.