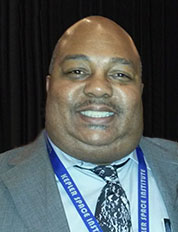 National Space Society Board of Advisors

Ken Ruffin is a Senior Environmental Engineer for one of the largest electric utilities in the USA, with over 25 years of experience in air quality inspections, consulting, permit applications, and compliance in both public and private organizations. For several years, Ken has also been an Executive Committee member of the Dallas Electric Club.

Growing up first in the Bronx, New York City, then in North Carolina, Ken was an L-5 Society member while attending Southeast Halifax High School and North Carolina State University. As an undergraduate, Ken initially studied Aerospace Engineering, then switched to Mechanical Engineering.

In 2010 Ken became an active member of the National Space Society Chapter in North Texas (NSS-NT) in the Dallas-Ft. Worth (DFW) Metroplex. In 2011 he started giving presentations on space travel and space development and became President of the Chapter that same year, being re-elected to that position for five one-year terms. Since 2016 he has served as Chapter Vice-President. During each year from 2013-2018, NSS-NT has earned an NSS Chapter Excellence Award four times, and the NSS Chapter of the Year Award twice. In 2018, Ken was presented an NSS Chapter Leaders Award from the NSS Chapters Committee.

Across the DFW Metroplex and beyond, Ken has given well over one hundred space presentations, been a speaker during space panel discussions at conventions, and has been interviewed by several TV and radio news stations and newspapers. Ken strives to inform and inspire people of all ages and all backgrounds about the latest and greatest information on space travel, space development, and space settlement from NASA, commercial spaceflight companies, universities, and associated organizations. Ken is fully committed to explaining these subjects—and the NSS mission and vision—to interested members of the general public.