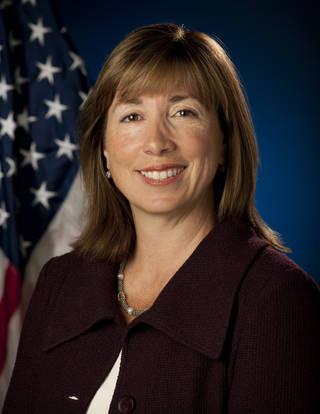 Lori Garver served as Executive Director of the National Space Society from 1987 to 1996, and served as Deputy Administrator of NASA from 2009 to 2013. She is a recipient of three NASA Distinguished Service medals, the Women in Aerospace Lifetime Achievement Award, and the National Space Society Robert A. Heinlein Award. She is author of the book Escaping Gravity: My Quest to Transform NASA and Launch a New Space Age.

A native of Michigan, Garver graduated from Haslett High School in Haslett, Michigan, in 1979 and four years later, in 1983, she earned a bachelor’s degree in political science and economics from Colorado College. Her focus turned to space when she accepted a job working for Sen. John Glenn from 1983 to 1984. She since has served in a variety of senior roles in the nonprofit, government and commercial sectors.

Garver worked at the National Space Institute beginning in 1984, and after its merger with the L5 Society to form the National Space Society, she became its second executive director in 1987. She served as the society’s primary spokesperson, making frequent appearances on national television and regularly testifying on Capitol Hill. During that time, she also earned a master’s degree in science, technology and public policy from George Washington University in 1989.

After working at NASA from 1996 to 2001, Garver was employed as the vice president of DFI Corporate Services from 2001 to 2003. From January 2001 until her nomination as NASA’s deputy administrator, she was a full-time consultant as the president of Capital Space, LLC, and senior advisor for space at the Avascent Group. In these roles, she provided strategic planning, technology feasibility research and business development assistance, as well as merger, acquisition and strategic alliance support, to financial institutions and Fortune 500 companies.

Nominated by President Barack Obama and confirmed by the U.S. Senate, Lori Beth Garver began her duties as the deputy administrator of the National Aeronautics and Space Administration on July 17, 2009. As deputy administrator, Garver was NASA’s second in command. She worked closely with the administrator to provide overall leadership, planning, and policy direction for the agency. Together with the NASA administrator, Garver represented NASA to the Executive Office of the President, Congress, heads of government agencies, international organizations, and external organizations and communities. She also oversaw the work of NASA’s functional offices.

Garver was selected to receive the NSS Robert A. Heinlein Memorial Award for her important work in promoting the agency’s pioneering Cargo Resupply Services (CRS) and Commercial Crew (CC) Programs, marking the beginning of a new relationship between NASA and private industry. “Lori’s work at NASA has ultimately saved the American taxpayer billions, of dollars,” said Dale Skran, NSS COO. “The Cargo Resupply Services and Commercial Crew programs represented a sea change in how NASA does business with the private sector. In large part as a result of Garver’s far-sighted leadership, public-private partnerships have become a growing part of how NASA operates, leading to rapid growth of private investment in space.”