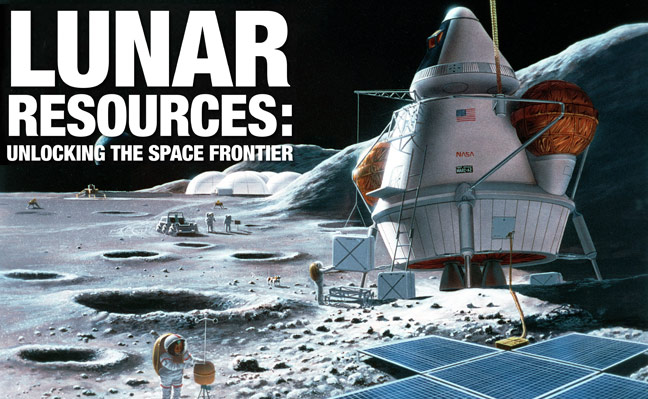 Humanity has attained the ability to venture into space, but just barely. The current template for spaceflight is to custom design and build a spacecraft, launch and operate it for a short time, and then abandon it. Sometimes a mission lasts for years, but more often, its duration is measured in weeks or months at best. This time scale is common for all missions, but most especially for human missions. Thus, although we can reach space, we can’t stay there for very long. In part, this operational paradigm is dictated by the need to blast people, our tools, food, fuel, and everything else we need, out of Earth’s deep gravity well. What if we were able to operate under another model? Suppose that we were able to use what we find in space to create new capabilities for spacefaring missions? But space is empty, you may say; space is a vacuum.

In fact, space holds an unlimited reservoir of material and energy resources. We can find or make anything we might need in space. Our road to reliable access and long-duration stays in space is blocked only because we haven’t yet learned how to access and use these resources. Because of its potential and reward, the use of space resources is a highly desired skill. So despite the revolutionary nature of the task ahead, many organizations are currently engaged in looking for ways to acquire this knowledge.

The Moon is the closest, most accessible heavenly object in space. It is a natural supply depot, stocked with the necessary resources we need to begin learning how to fundamentally alter our paradigm of space travel. Learning how to use non-terrestrial resources has never been done in space. But using them requires only relatively low-level technology — bulk material for building aggregate, water evaporation, distillation, product storage, and waste disposal. Because the Moon is close and accessible, it is an ideal natural laboratory where we can acquire and practice these skills.

The resources of the Moon come in two forms: energy and materials. The sunlight of the lunar surface is nearly pure and unfiltered by the Earth’s atmosphere. Because the Moon rotates on its axis very slowly (once in about 708 hours), we get about 14 days of uninterrupted sunshine at any spot on the Moon. Of course, free space gives you sunlight 100 percent of the time, but the value of sunlight on the Moon is that it is also close to the material resources we want to use. In addition, the poles of the Moon are unique environments where sunlight is available on an extended basis.

The Moon’s spin axis inclination is only 1.5 degrees as opposed to the 22.5 degree axis of the Earth. If you’re standing at one of the lunar poles, the Sun will circle around you near the horizon instead of rising and setting as we are used to viewing it here on Earth. On a peak, you might see the Sun all the time. If you’re in a deep hole, you may never see it. This simple geometry is why the poles are unique. New data returned from orbital mapping missions have revealed several locations near the poles of the Moon that are illuminated almost constantly. By locating a lunar resource processing facility near the pole, solar-generated electrical power will let us operate nearly constantly. Moreover, because the Sun is always near the horizon, its illumination only grazes the surface so there are no large temperature swings to give engineers headaches. The near-permanent sunlit areas near the poles always remain a nice, toasty -50 degrees Celsius (-58 degrees Fahrenheit).

Along with the constant sunlight and a benign thermal environment, craters near the poles are shadowed in permanent darkness. This is important because this makes them extremely cold; measurements of the dark areas from the Lunar Reconnaissance Orbiter show that some of them are only 25 degrees above absolute zero (-248° Celsius). These regions are called cold traps, because they are permanently cold and retain any volatile molecule that finds its way there. The Moon is bombarded by water-bearing meteorites and cometary nuclei, which continuously add water-ice particles and vapor to its surface. While most of this water is lost to space, some of it ends up in cold traps and can’t escape. We knew about cold traps and speculated that there might be water-ice near the lunar poles. Several spacecraft sent in search of this ice found it.

Water on the Moon

Water-ice in these cold areas of the Moon is present in a variety of concentrations. The Chandrayaan-1 spacecraft found spectral evidence for an extremely thin layer of water molecules at the highest latitudes on the Moon. This water is in motion, as local heating by sunlight drives the water toward cooler locations. Thus, over time, there is a net addition of water to the polar regions.

Water vapor was detected above the lunar South Pole by the Moon Impact Probe on Chandrayaan-1. The LCROSS impactor threw water vapor and ice particles into space, which told us that ice is present in at least this dark region near the South Pole. Finally, the Mini-SAR imaging radar on Chandrayaan and Mini-RF radar on LRO found evidence of nearly pure water deposits several meters thick within some of the dark, shadowed craters near the poles. Tens of billions of metric tons of water are suggested by these findings. Water is the most immediately useful product we can produce in space. It supports human life, both for drinking and breathing (when dissociated into its component hydrogen and oxygen). It is excellent radiation shielding, providing the most mass-efficient shielding material we know. Water is also a medium for energy storage, as it can be cracked into its component gases by electrolysis from solar power during daylight, then recombined into water at night to generate electrical power. Finally, water can be processed into liquid hydrogen and oxygen propellant to re-fuel spacecraft both on the lunar surface and for export to cislunar space.

Mining for the Future

The extraction and processing of lunar polar water permits us to build a reusable, sustainable presence in cislunar space — the space where nearly all of our space assets reside. By building a space transportation system that uses the resources of the Moon for provisioning and refueling, we have in effect created a transcontinental railroad in space. And like its namesake, such a system will open up the new frontier of space to exploration, science, business, and settlement.

Other material resources of the Moon permit and facilitate the build-up of off-planet facilities, greatly reducing the amount of mass needed from Earth. Bulk regolith is an extremely useful building material; we can use it to create roads, landing pads, and ultimately, structures. Regolith can be sintered into bricks or ceramics using either thermal heat from the Sun or microwaves. Roads and landing pads can be paved using rovers carrying microwave devices no more powerful than a standard kitchen microwave oven. Berms (raised shelves or barriers) can be constructed to prevent dust thrown up by rocket exhaust from covering equipment. Eventually, we can process the silicate particles of the regolith to extract metals, such as ultra-pure iron for electrical cables and aluminum for building large structures. By using the abundance of useful materials found on the Moon, we can create the capability for permanent human habitation off the Earth.

The use of non-terrestrial resources is an essential skill that spacefaring people must master. Lunar return provides us the opportunity to begin this task. We are fortunate to have such a useful body so close-by in space. Once we have a resource utilization operation established on the Moon, we can begin the development of a true spacefaring transportation system — one that is reusable, maintainable, and extensible. By creating this space infrastructure — one that will provide routine access to cislunar space and beyond — we will learn how to live off our world and be better prepared to begin our migration to places beyond the Earth-Moon system. 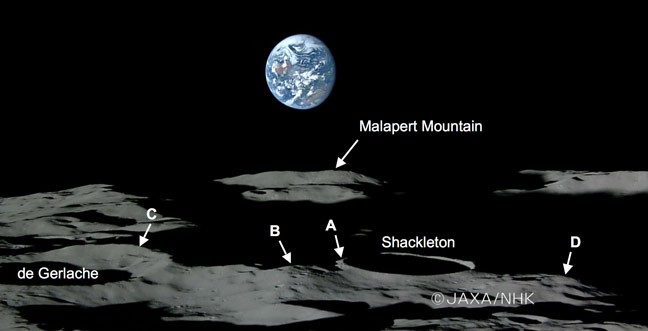 HDTV view of the south pole of the Moon taken by the Japanese Kaguya spacecraft. © JAXA/NHK.

Paul D. Spudis is a staff scientist at the Lunar and Planetary Institute in Houston, Tex. and the author of the just-released Blogging the Moon: The Once and Future Moon Collection published by Apogee Books. He blogs about all things lunar at the Smithsonian’s Air and Space magazine website (www.airspacemag.com/tag/once-and-future-moon/).