Part IV: To the Moon 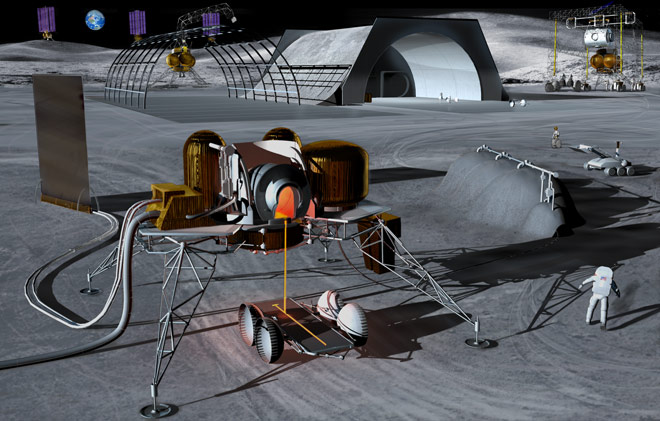 The Moon, only a quarter of a million miles away, passing overhead every night, beckons as a visible and obvious destination for human settlement.

Major Barriers specific to the Moon will have to be overcome to reach the Milestones en route to that settlement. Those Barriers include:

Scientific investigation of the Moon is currently being, and will continue to be, undertaken by or with the support of various governments, but only on a project by project basis. Until a firm, final, irreversible and financially supported commitment is made to create a permanent — and the operative word is “permanent” — settlement on the Moon, it will not happen. That commitment could occur early, in the event of a national political decision, or only after successive phases of lunar exploration and development have shown a likelihood of cost effectiveness and sustainability. Either way, obtaining that commitment might even be viewed as a Milestone in its own right.

Early Lunar bases run the risk of being abandoned if reusable transportation systems are not used from the beginning. This risk will be lessened to the extent that, from the start, mission architectures are designed as a sustainable, reusable, integrated system that pursues ISRU and self-sufficiency technologies as a very early goal.

There are two major potential barriers to a permanent human settlement on the Moon: radiation and gravity only one-sixth that of Earth.

(1) Lethal ionizing radiation comes from the sun and even more powerful cosmic rays originate from outside the solar system. Habitats will have to be shielded, probably by being covered with thick layers of local regolith or built underground. More difficult will be finding a way to shield humans while operating on the surface.

(2) Gravity is the true unknown. Humans (as well as other animals and plants) are the product of some 500 million years of terrestrial evolution, all that time being adapted to live in a one-gravity environment. We already know of problems from long duration space flight, such as bone loss and vision degradation. No one knows whether or not humans can live long-term in the low lunar gravity, nor whether offspring can be safely born and raised. This barrier will be tested either by the placement in orbit of a variable gravity centrifuge (something that was omitted from the International Space Station) or the hard way, by real-life experience by people living on the Moon.

Each body orbiting the Sun has its own characteristics. The Moon presents some unique challenges which will have to be overcome — e.g., its half-month days followed by half-month nights, its pervasive and abrasive dust, its cratered and mountainous terrains, its possible lack of usable water, and its most useful resources (including what water exists) not being conveniently located.

Satellites orbiting the Moon and possibly robotic landers determining the nature and extent of lunar ice and volatile deposits and providing the information necessary to guide the choice of the best sites for a lunar outpost.

The Apollo missions chose landing sites primarily on the basis of safety on landing and then on the basis of general scientific interest to learn about the history and composition of the Moon. Successor lunar missions have emphasized and will continue to emphasize discovering what lunar resources can best support future long-duration human operations there.

Robotic probes from several countries have determined that water and other valuable volatile elements are present in significant percentages in lunar soil in certain areas near the lunar poles, notably in deep permanently shadowed craters. Knowing exactly what these volatiles are and how extensive are the deposits, and especially how much of them are water, will be crucial to understanding their availability to make rocket fuel and breathing oxygen and provide other support for human habitation. Every kilogram of water that does not need to be imported from Earth represents a significant step toward self-sufficiency and immensely eases the logistical requirements for supporting humans on the Moon. Thus, this knowledge about lunar volatiles will provide the basis for designing all subsequent lunar habitats.

While attention has been focused on volatiles at the lunar poles, as well as the possible advantages of a deep crater for lunar optical and radio astronomy, there are obvious difficulties of establishing the first habitats at those sites — e.g.,

These difficulties will motivate the continued search for sites that may lack volatiles but will have the advantages for a first outpost that a polar site lacks. Other advantages may include the existence of caves, or different soils that can be better utilized in the construction and maintenance of a habitat, or higher concentrations of particular metals.

When all the new data is evaluated, and all the variables balanced, including initial and ongoing costs, a choice will be made for where to site the first permanent outpost — i.e., where structures will be landed or built which will be the site for more than a single visit.

The first outpost will be designed to support successive missions, each building on the knowledge gained and infrastructure built by its predecessors. This facility may be government sponsored and funded, or could be established by private enterprises. The outpost may consist of a single module visited and used over and over or of multiple modules landed or constructed in later missions; the latter is likely to be the most cost-effective and productive. An early module could be a habitation module, allowing extended crew stays. Other deliveries, either before or after a habitation module, could be rovers, bulldozers and tractors, building cranes, mining equipment, kilns for metallurgy, telescopes for astronomy, medical labs and other scientific modules, and more habitation modules. This staging would allow for both short visits by scientific specialists and the gradual building of a larger facility at the initial site.

The outpost could be either vacated between missions or be continuously occupied. If the latter, the outpost will be exceptionally useful in determining the ability of Earth life to thrive for long periods in the one-sixth gravity environment, and in the case of plants and other animals, to reproduce successfully.

This first outpost will be mainly a research facility. Over time and as it grows, it will test, among other things,

Surface explorations will also continue contributing to our scientific knowledge about the Moon generally.

In addition, if the public relation possibilities are maximized, regular broadcasts from the Moon will serve to educate the public and increase support for further human space activities. Entertainment companies, in particular, may find a way to finance and profit from such activities.

The first outpost or outposts are likely to conform to current astronaut safety standards. That will mean (1) having always available in case of emergency a means to return to Earth, whether by a vehicle capable of returning directly to Earth or a vehicle capable of reaching a second vehicle in lunar orbit that can return them to Earth, and (2) having a crew refuge which can sustain the crew against sudden burst of solar or cosmic radiation for a specified length of time (and is also a crew habitat during normal operations). The exposure to sudden radiation bursts was an inherent risk accepted by the Apollo missions, but will probably not be accepted where long duration stays are involved.

MILESTONE 12: A Government / Industry Lunar Base.

The initial research facility evolving into a permanently occupied, ever-expanding lunar base, or such a base created at another site using what has been learned from the initial facility, and increasingly performing commercial functions.

Once the initial lessons have been learned from the lunar research facility, a growing lunar base will turn its attention to maximizing its usefulness to other space operations and achieving some commercial profitability. The base will encourage early industry investment and involvement. Some separate modules could be privately financed, as could the visits by various researchers.

The lunar base will continue the basic scientific and technological research begun by the research facility, probably with government funding and direction. It will also be used to provide government services for use on Earth, such as environmental sensing, including “space weather,” and tracking objects orbiting the Earth. The techniques learned during the Research Facility phase — e.g. utilization of lunar volatiles to produce rocket fuel — will increasingly be incorporated into the Base phase.

In addition, with the experience gained from operating in the lunar environment, the base very likely will be used as a test-bed for developing and checking out the many technologies and hardware that will be needed for Mars missions. While Mars has a slight atmosphere, different dust, seasons, and gravity twice that of the Moon (although still only one-third that of Earth) conditions on the Moon provide a much more rigorous environment for thorough testing. Even entire modules intended for Mars could be field-tested on the Moon.

Both by design and happenstance, commercial uses of the lunar base will increasingly arise. As the technology gets increasingly proved, so that the risk from innovation uncertainty is substantially reduced, private companies will be better able to evaluate the risks and potential profits of investment in the lunar infrastructure. At that point, they are likely to invest in (i.e., fund) lunar enterprises more substantially. Possible commercial opportunities include, e.g.,

The lunar base evolving into a permanent settlement, increasingly self-sufficient and increasingly focused on commercial activities.

As the lunar base grows, in volume, in area, in the number of modules connected and nearby, and, especially, in population, at some point people will look back and realize that people are on the Moon for good. While it is hard to define a “permanent settlement,” some aspects that might be present include:

While the settlement’s facilities are reasonably predictable, the composition of its population is not. That will depend on what are the biological effects of living in the low lunar gravity for long periods, even a lifetime, and on fetal development and later growth. It may be that people and their families will be able to move to the Moon and live there for generations, or it may be that the permanent settlement is filled by a constantly changing population.

As the cost of space transportation drops and the cost of the settlement is amortized or written off, the commercial activities that were initiated and experimented within the base phase will be expanded, especially tourism and development of products and services for use on Earth. Lunar hotels may be among the structures most frequently added to the settlement. The low lunar gravity might even make the Moon a retirement destination of choice. An increasing proportion of lunar settlers will be involved in these commercial activities, rather than in routine maintenance.

One significant commercial activity that could be sustained by a growing permanent settlement would be the creation of a system of mass drivers. These would electromagnetically hurl mined lunar materials or lunar-derived rocket fuel into orbits where they could be used to construct orbital space habitats or to refuel outbound spacecraft substantially more economically than could be done if those resources needed to be brought up from the bottom of Earth’s gravity well.

Proceed to Part V: To Mars