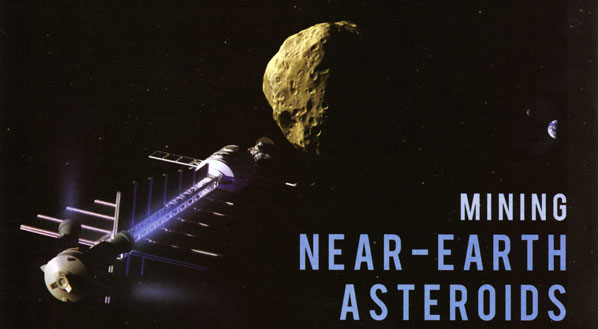 The Solar System beckons with resources unimaginable on Earth

The near-Earth asteroids (NEAs) represent a vast and, as yet, untapped reservoir of mineral resources for in-space use as we expand the human presence beyond low-Earth orbit. About half the NEAs are made up of the same materials as a typical rocky meteorite. These contain small flakes of nickel-iron alloys and platinum group metals in much greater abundance than typical rocks from the Earth’s crust. Most of the rest of the NEA population resembles the carbonaceous meteorites and contain a higher fraction of water and carbon-containing minerals. A little less than 10 percent of the NEAs are essentially massive mountains of nearly pure iron and nickel. All of the NEAs represent a resource smorgasbord far richer than the lunar regolith, the bleak soil on the Moon, another favorite target for future off-world mining operations.

The question before us here is: Could we mine a small NEA right now and actually make use of some of this mineral wealth? That is, assuming that the operational and economic infrastructure were now in place and required the in-space utilization of materials mined from small asteroids, do the techniques and technologies exist that would allow us to do so? If not, what do we still need to do and to learn in order to make asteroid mining a reality? The answers to these questions also bear directly on the closely related requirements for preventing the impact of a threatening asteroid.

Let’s first look at the environment that exists on and around small NEAs before considering the technological requirements for harvesting their mineral riches.

Planetary scientists estimate that there are some 1,100 asteroids larger than a kilometer in diameter. Smaller, football-field-size objects are much more numerous-more than 100,000 of them orbit the Sun in near-Earth space (although at present we have catalogued only a few percent of them). Objects so small exert only a feeble gravitational pull befitting their diminutive stature. The surface gravity of even a modest-size kilometer-diameter rocky asteroid is only of order 1/30,000 of a g. It is in fact the negligible surface gravity of these objects that makes them such attractive targets for future mining activities; the materials mined from their surface need not be lifted back out of a deep gravity well in order to be delivered to the places where the resources are needed.

But this low gravity can cause serious operational challenges as well. Simply moving around in the close vicinity of a lumpy and potentially rapidly rotating or tumbling NEA can be counterintuitive. Rather than orbiting the smallest asteroids, oilplatform-like equivalents of future mining factories may instead “station keep” in close proximity, rather like a Space Shuttle orbiter maneuvering around the International Space Station. Human and robotic mining engineers moving about along the surface will similarly need their own on-board and very capable navigation systems for the real-time trajectory calculations necessary in simply moving from point A to point B. The difficulties faced by the Hayabusa mission in trying to simply “drop” the tiny MINERVA rover onto the surface of the 500-meter-diameter asteroid Itokawa show that we still have some work to do in even this most basic area of mining operations.

Once finally on an asteroid’s debris-strewn surface, fine dust-easily motivated in the milli-g environment-will likely be a problem. Electrostatic charging now becomes a dominant force on dust particles, causing them to adhere to just about anything, the fine workings of mining equipment included. And once it is there you can’t simply brush it away. Apollo 16 Commander John Young doesn’t mince words when describing what he sees as one of the most serious concerns for future lunar explorers, and the same goes for asteroids as well: “When people talk about long-duration operations on the Moon, the thing they better worry about is the dust.”

Now, how do we actually go about mineral mining in such an environment? First, we have to get there! Today, we can obviously travel to and even “land” on asteroids, but real mining operations are going to require much more massive and expansive spacecraft operations than NASA’s NEAR-Shoemaker mission or Japan’s Hayabusa. Ion propulsion allowing for sustained and highly efficient operations will be essential if we decide we’d like to move a particularly attractive (or threatening) asteroid into a more accessible orbit. The nuclear electric propulsion technology that NASA was pursuing through the Prometheus program was a very promising move in the right direction, but, unfortunately, that program has been abandoned for now. Although certainly challenging, Prometheus required no extraordinary technological stretch. Revamping something like that program will simply require the political and financial will to do it.

What about power to run the operation? No problem! Solar power is a practical and abundant option in near-Earth space. And of course, if you’re moving about the Solar System in nuclear fission-powered spacecraft, you have a lot of power to spare coming along for the ride.

Affixing or docking to the surface of a small asteroid in order to actually dig into its regolith or drill into its bedrock, may be easier said than done. And the methods that work for one object may not work at all for another. Harpoons or penetrators may be a tractable option for objects with porous but cohesive surfaces. Electromagnet pads might just work on the iron-rich asteroids. If we pick very small asteroids, our mining facility may not even “land” on the object at all-the rock could be swallowed whole by the spacecraft itself and mechanically and chemically digested for its resources. That, of course, is a technology yet to be demonstrated for large-scale, in situ operations.

So, are we ready? Could we mine an asteroid today? Clearly the answer is “no.” Our autonomous robotic capabilities are not yet developed enough to allow it (we don’t even have the capabilities to do so in a fully autonomous manner here on Earth), and we’re still at least a decade away from returning people to the Moon. But as soon as the scale of our operations in space reach a point where it becomes more economical to obtain and use mineral resources there rather than delivering them from deep in the Earth’s gravity well, we’ll be off and mining the most attractive resources out there-the asteroids.

Dr. Dan Durda is a planetary scientist at the Southwest Research Institute in Boulder, CO. He is also an accomplished illustrator; his work has appeared on SPACE.com as well as in Sky & Telescope. Durda also holds a pilot’s license, and is an expert underwater cave diver. He is also a hiker, spelunker and geologist.