More ESCANDALO in Space: In Which a Certain Astronaut Racks Up 28 Parking Tickets at JSC for the Lolz 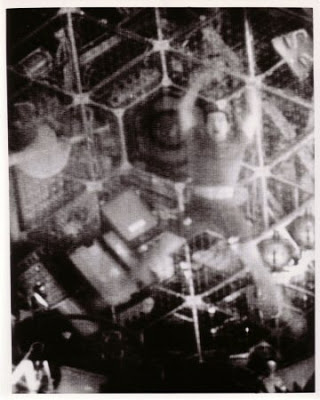 “But I can’t go to jail; I’m a doctor!” Dr. Kerwin reacts to finding out the consequences of his Emily Carney-style approach to parking problems. (BTW, I am Emily Carney.) 1973 NASA photo. Agony at its finest despite the blurriness provided by Kerwin.
We at This Space Available are big fans of the first U.S. doctor in space, Dr. Joseph P. Kerwin. I’ve heard though the grapevine that he’s a really nice guy and a total gentleman. He provided probably some of the best photo opportunities in NASA history and was absolutely shameless about looking like a total goober. At some point, he did some important scientific stuff in the name of science (in all seriousness, he was the Director of Space and Life Sciences at Johnson Space Center in Houston for some time). He got to participate in one of the longest in-orbit parties ever called Skylab 2. He was bros with Pete Conrad. You get my point.
In the mid-1960s he also decided to break the record for the most parking tickets acquired by anyone at JSC. He made it to 28 parking tickets total. This is, in itself, an astonishing feat. No one, including Neil Armstrong, had probably ever done this before. His knowledge of all things medical and spaceflight-related was inversely proportional to his skill at using a parking meter. As the story goes, Kerwin received a nasty-gram from JSC’s security people about his number of tickets. He brought this letter to his supervisor, who happened to be the extremely terrifying Alan Shepard, first U.S. man in space and a bit of a grumpy guy.
Kerwin asked Shepard, “Is this the record or should I keep trying?” Shepard then told Kerwin to “knock it off.” He also probably dislodged a foot in the poor naval flight surgeon’s behind just for craps and giggles, topped off with shouts of “I WAS THE FIRST U.S. MAN IN SPACE AND DON’T YOU EVER FORGET IT.” (Did you know that Shepard was so scary in the mid-1960s, according to the miniseries Moon Shot poor Stuart Roosa would literally avoid him in the hallways around NASA? Eventually Big Al loosened up and became buddies with everyone around his moon landing in 1971.)
If you’d like to read more about Dr. J.P. Kerwin’s brush with the Long Arm of the Law, check out this interview from a few years back. In addition, it is a great summary of his entire career at NASA and beyond.