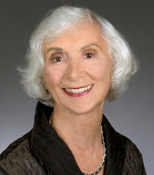 Barbara Marx Hubbard has been a pioneer in positive options for the future of humanity for decades. A public speaker, author, and social innovator, she is president and executive director of the Foundation for Conscious Evolution.

She has been instrumental in the founding of many future-oriented organizations, including the World Future Society, New Dimensions Radio, Global Family, Women of Vision In Action, The Foundation for the Future, and the Association for Global New Thought.

In the 1960’s she published one of the first newsletters on evolutionary transformation called The Center Letter, with the support of Dr. Abraham H. Maslow, founder of Humanistic Psychology. She worked closely with Dr. Jonas Salk and was one of the original contributors to the Salk Institute. In the 70’s she co-founded the Committee for the Future in Washington, D.C. which developed the New Worlds Educational and Training Center, based on her work. She co-produced twenty-five SYNCON (Synergistic Convergence) conferences to bring together people from every field and function to seek common goals and match needs and resources in the light of the growing potentials of humanity. She wrote and presented the Theater for the Future, a multi-media story of creation culminating in “Previews of Coming Attractions”—what it might be like if everything worked.

In 1984 her name was placed in nomination for the vice-presidency of the United States on the Democratic ticket. She proposed a Peace Room in the White House and throughout the world, to scan for, map, connect, and communicate what is working. She was one of the original directors of the Center for Soviet American Dialogue and served as a citizen diplomat during the late 80’s.

Dr. Hubbard’s books include The Hunger of Eve: One Woman’s Odyssey toward the Future (1976), The Evolutionary Journey: Your Guide to a Positive Future (1982), The Revelation: A Message of Hope for the New Millennium (1995), Conscious Evolution: Awakening the Power of Our Social Potential (1998), and Emergence: The Shift from Ego to Essence (2001).