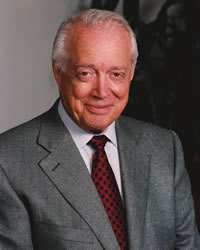 Hugh Downs was Chairman Emeritus of the Board of Governors for the National Space Society (NSS).

Hugh Downs retired from his role as one of the most familiar American television figures in the history of the medium. He was Chairman of the Board of the United States Committee for UNICEF, Trustee of the Menninger Foundation, and has served as a member of the NASA Advisory Council.

Mr. Downs was born in Akron, Ohio. He began his broadcasting career as a radio announcer in Lima, Ohio at the age of 18. After serving in the U.S. Army, he joined NBC in Chicago as a staff announcer, and joined the Home show on that network in New York in 1954. From 1956-57, Mr. Downs was the announcer for NBC’s Caesar’s Hour.

In July 1957, he helped launch The Tonight Show with Jack Paar and stayed with the late-night series for five years. In August 1958, Mr. Downs became host of the daytime game series Concentration, a role he continued when he began his Today show appearances.

Mr. Downs lectured throughout the country on a wide range of subjects, including the quality of life, energy, the role of the communicator in environmental concerns, the exploration of space, and aging in America. For this work, Mr. Downs received multiple Emmy Awards and nominations.

He authored an autobiography, Yours Truly, Hugh Downs; and Doubleday published a collection of his science articles entitled Rings Around Tomorrow. His other books included A Shoal of Stars, his account of sailing a 65-foot ketch across the Pacific; Potential, a psychological study of human maturity; Thirty Dirty Lies about Old, which debunks the myths about aging; The Best Years Book, a manual on late years’ planning; On Camera: My 10,000 Hours on Television; Fifty to Forever, a manual on planning for later years, and Perspectives, a wide-ranging collection of more than 50 of his most interesting, informative and entertaining essays, adapted from his ten-minute radio broadcasts of the same name on the ABC Radio Network.

Mr. Downs chaired the Research and Education Committee of the Geriatrics Advisory Council of the Mount Sinai Medical Center. In June 1992, he received a Certificate in Geriatric Medicine for Continuing Medical Education (CME) Geriatrics Review Course at Mt. Sinai Hospital, New York. Mr. Downs also served, beginning in 1982, as a member of the Board of Overseers of the Brookdale Center on Aging of Hunter College.

He and his wife, Ruth, lived in Arizona, in addition to maintaining a residence in New York. They have two grown children, Hugh Raymond and Dierdre Lynn.