Jack Olson was born October 24, 1922, in Bottineau, ND. He attended the University of North Dakota, graduated from the Minneapolis School of Art and Design, and later received a bachelor’s degree in aeronautical engineering from what is now Central Washington University.

He served in the Army Air Forces in World War II as an instructor and pilot, surviving a midair collision in a B-24. Though the four-engine plane lost half of a wing, he was able to land it with no casualties.

After leaving the Army as a first lieutenant, Mr. Olson joined Brown & Bigelow, which makes promotional gifts for companies. While at Brown & Bigelow, he received 120 mechanical and design patents.

After going to work for Boeing in 1958, Mr. Olson worked on projects ranging from designs for the Boeing Jetfoil to concepts that paralleled the later design of the Hubble Space Telescope and a mass-transit system in Morgantown, WV. He also pioneered the concept of using the barren land beneath a solar power satellite rectenna as a greenhouse, which could provide food for a city of a million people.

He took medical retirement in 1984 and succumbed to a long bout with cancer in 2001.

One of his most widely recognized activities involved producing visionary illustrations of space exploration, and 21 of his space paintings are on display at the Smithsonian. Below is his depiction of a solar power satellite under construction by Boeing. 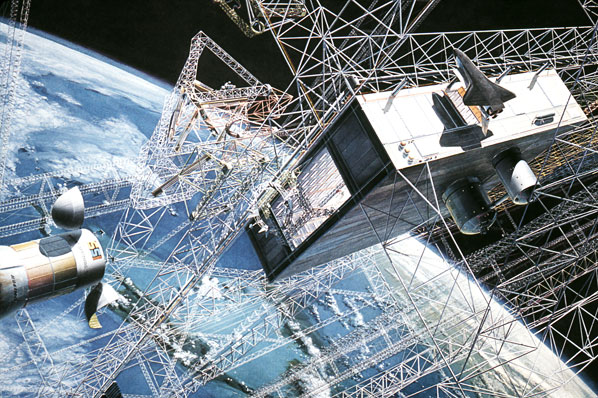