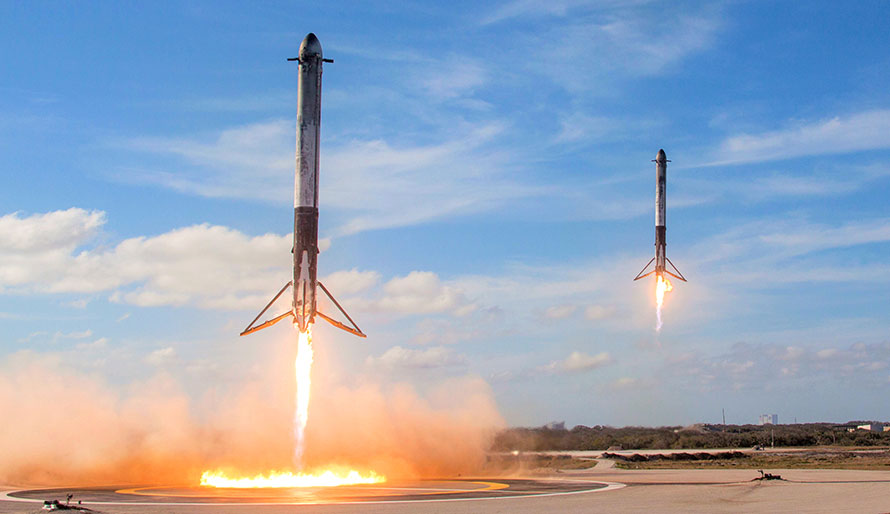 The emergence of partially and fully reusable rocket boosters and other efficient means of reaching orbit will result in more efficient and reliable launch vehicles or methods with faster turnaround times and higher launch rates. These improvements will significantly lower the cost of access to space, allowing a much larger launch market which then could further assist in launch cost reduction due to higher demand. These improvements will also enable multiple new uses of space which are currently too expensive for practical use. Such uses could include space solar power, space tourism to orbit, and additional types of commercial uses of orbital space.

Progress on this milestone will be demonstrated as new uses, such as those given above, become affordable. Significant progress toward this milestone is likely to be made within a few years.

Private Launch Companies. The emergence of private launch companies who provide launch services for both government and private customers is revolutionizing the launch industry. The focus on reusable rockets by several companies will eventually reduce launch costs to a fraction of current rates and finally allow high mass space operations.

Government programs. Technology development and other programs by U.S. and other governments may assist in reducing launch costs.

Government Contracting Practices. Government contracting practices and policies that encourage the design, construction and use of newer technologies are needed. These policies should emulate more commercially reasonable practices, which will likely dramatically lower the cost of government-funded efforts. Such practices include continuing to move from direct responsibility for managing the development of launchers and other hardware to just purchasing hardware and launch services for crew and cargo from commercial sources. With a government as a stable customer, a market is likely to be created which will encourage competition among many enterprises, existing and new, which will inevitably further reduce the unit cost of each space flight.

Progress in Launch Technology. Launch rates alone cannot be counted on to reduce launch costs (for example, if labor costs for construction and launch are too high). Improvements will occur in methods used for the design and physical construction of boosters, testing and preparing them for launch, and operating them before and during launch, which will speed and automate operations and thereby reduce cost. One significant example is the use of reusable vehicles. Eventually non-rocket  launch methods, such as magnetic acceleration with linear motors for certain cargo, might be developed. Other examples include standardized payload containers and test procedures to minimize loading operations costs. Additionally, launch costs can be reduced by large vehicles that fly routinely such that no one customer is paying for the entire launch, or on smaller vehicles such that a dedicated launch is affordable to a wide range of customers.

Space Tourism. Space tourism may develop into an industry requiring numerous launches that will lower the cost of each launch to commercially sustainable levels. Hundreds, perhaps thousands, have already made deposits on private suborbital flights. These journeys will later extend into Earth orbit and then into orbits around the Moon and back.

Commercial Facilities in Orbit. With the development of reliable and affordable space transportation, private enterprises could develop commercially profitable orbital facilities, e.g., hotels and factories. These facilities will be large enough to allow travelers to enjoy the feel and unique opportunities of zero gravity for extended periods, but small enough to be able to move to avoid known space debris. It is likely that transportation and facilities will evolve together, in that the availability of one will serve as a commercially justifiable rationale for the other.

Space Solar Power. A different path to enabling a market to support high launch rates and lower costs to orbit might be forged by the world’s need for power. In this case, human travel to destinations in and beyond Earth orbit would be an incidental benefit rather than a primary goal. If and when it becomes apparent that space solar power is a practical energy source, or that all available conventional sources of power (e.g., coal, natural gas, wind, hydroelectric, geothermal, nuclear, and ground-based solar) will either be inadequate to meet the needs of society, will be too expensive for some markets or have unacceptable side-effects, people will look more closely at space solar power, or SSP. This is sometimes referred to as space-based solar power, or SBSP, since it involves satellites in space harvesting and transmitting the Sun’s energy down to Earth. The SSP systems that emerge could be built by private enterprises on their own or by governments, or by some sort of partnership. Either way, those systems require and therefore will result in the high frequency of launches that drives costs down.

Governmental Policies. Whether or not governments believe in, or are willing to wait for, private enterprise to lead the way, they, as a national policy choice, may commit to the building of large space outposts in Earth orbit, on the Moon or elsewhere, which will require a number of launches over a sustained period large enough to reduce the per-launch cost to financially practicable levels. Such governmental initiatives may be created by a desire for prestige or to not be left behind by the space initiatives of other countries, by a concern for protection from asteroids and comets, by the need for a space-based solar power system to transmit solar power to Earth, or by government uses of space for security, environmental surveillance, improved communications, or many other uses, as well as by the traditional philosophical, political and economic policy rationales long articulated by NSS and others in the space community. Such initiatives will increase launch rates and reduce unit costs. To be effective, the policies must use launch costs as one of the primary criteria for selecting a launcher. Further, government certification requirements should not unfairly penalize or impede the use of reusable vehicles.

This milestone will be considered achieved when launch prices to Low Earth Orbit will no longer be a major barrier to space operations. (This means dropping by a factor of ten or more below the average 2017 global price of about $5000 per kilogram).