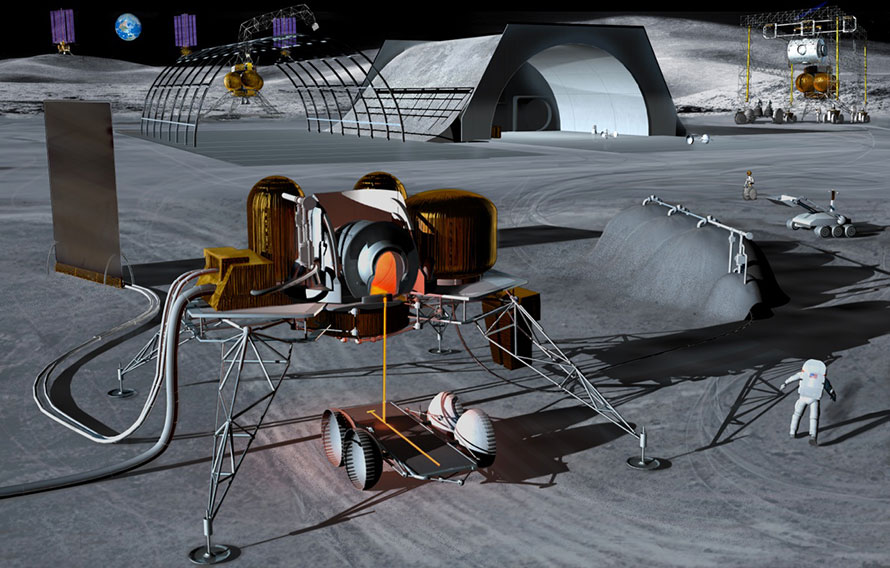 A choice will be made for where to site the first lunar outpost. Habitation structures will be landed or built at the site for use during more than a single visit.

(A) Finding, selecting and validating sites for lunar outposts. Some of the most critical site characteristics may be detected by orbiters and by surface rovers. Various lunar sites should be considered for early outposts, each with advantages and disadvantages. Lunar polar sites have the advantage of less extreme temperature fluctuations, and do not have two-week long night periods. They also probably have valuable resources in deep craters in the four volatile deposit zones that are directly around and adjacent to the polar zones. Other site characteristics would be included in the selection process, such as: (1) mineral abundance levels in the regolith, (2) special geological features like lava tubes, (3) the nearby availability of sunlight (4), proximity to good locations for radio astronomy, (5) terrain roughness which affects the ability of rovers and humans to navigate around and use the site, (6) limitations to equipment use due to extremely low temperatures in permanently shadowed zones.

Lunar base sites outside the polar areas may be established later, or sooner if the polar volatiles prove to be difficult to extract, which may motivate a continued search for sites that may lack volatiles but might have advantages for a first outpost that a polar site lacks.  All sites outside the immediate polar zones have a two week long lunar night, which makes additional reliable power sources mandatory.

(B) Facility design and operation. The first outpost should be designed to support successive missions, each building on the knowledge gained and infrastructure built by its predecessors. This facility may be government sponsored and funded, or could be established by private enterprises. The outpost may consist of a single module visited and used over and over or of multiple modules landed or constructed in later missions; the latter is likely to be the most cost-effective and productive. An early module could be a habitation module, allowing extended crew stays. Power supply modules must be landed before human crews arrive. Other deliveries, either before or after a habitation module, could be rovers, excavators, tractors, unloading and building equipment, pilot scale mining and smelting equipment, kilns for metallurgy, telescopes for astronomy, medical labs and other scientific modules, and more habitation modules. This staging would allow for both short visits by scientific specialists and the gradual building of a larger facility at the initial site.

The initial outpost could be either vacated between missions or continuously occupied with a small, rotating crew. If the latter, the outpost will be exceptionally useful in determining the ability of Earth life to thrive for long periods in the one-sixth gravity environment, and in the case of plants and other animals, to reproduce and complete life cycles successfully.

This first outpost will probably be a combined research facility and mining base, and probably at a polar location. The crew habitat module must be shielded from space radiation and temperature extremes. This can be done by burying the habitat underground or covering it with several meters of regolith. If sufficient equipment is available, and a large lunar lava tube is found in the right location, the tube might be used for shelter. Over time and as it grows, the outpost may be able to test, among other things:

Surface explorations based from the facility will continue contributing to our scientific knowledge about the Moon.  In addition, if the public relation possibilities are maximized, regular broadcasts from the Moon will serve to educate the public and increase support for further human space activities. Entertainment companies, in particular, may find a way to finance and profit from such activities.

The first outpost or outposts are likely to conform to current astronaut safety standards. That will mean (1) always having available a means for emergency evacuation to Earth or another safe crew refuge, and (2) having a shielded crew refuge which can sustain the crew against sudden burst of solar or cosmic radiation for a specified length of time (and which can also serve as a crew habitat during later normal operations). Apollo-mission level risks will probably not be accepted where long duration stays and routine lunar flight operations are involved.

This milestone can be considered achieved when significant scientific results are returned and (depending on the amounts of volatile deposits found) when a commercially significant amount of lunar water has been extracted and processed.