An initial lunar facility evolving into a permanently occupied, ever-expanding lunar base (or such a base created at another site), using what has been learned from the initial research and development facility, and increasingly performing commercial functions such as production of rocket fuel from volatile deposits and shipment of the fuel to orbit. 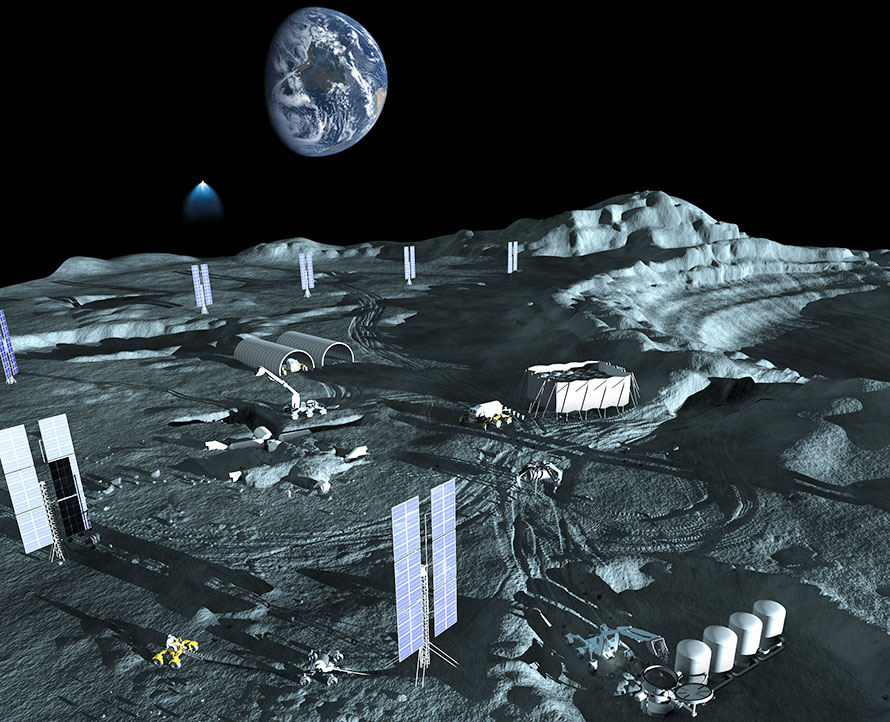 Advancement of lunar (and Earth) science, use of resources, and preparation for possible future lunar settlements are some of the main rationales for a lunar base. The goals of science with In-Situ Resource Utilization (ISRU) may be paired to share the cost of the base. Both activities can also be conducted with a rotating crew, avoiding the possible long-term problems associated with low gravity, etc.

Early lunar bases run the risk of being abandoned if affordable space transportation systems are not used from the beginning and if the order and composition of critical base infrastructure is not agreed on. The risk of abandonment of an early lunar base may be lessened to the extent that, from the start, mission architectures are designed as a sustainable, modular, reusable and thus affordable, integrated system that pursues ISRU and self-sufficiency technologies as a very early goal. Creating an economic rationale for the base, such as a commercial ISRU operation that produces propellant for both lunar, cislunar and Mars operations, would greatly enhance the probability that the lunar base would continue to be supported.

Once the initial lessons have been learned from the lunar research and development facility, a growing lunar base will turn its attention to maximizing its usefulness to other space operations and achieving some commercial viability. The base will encourage early industry investment and involvement. Some separate modules could be privately financed, as could visits by various researchers.

Noncommercial Functions. The lunar base will continue the basic scientific and technological research begun by the research facility, possibly with government funding and direction, including Earth observation.  The techniques learned during the Research Facility phase — e.g. utilization of lunar volatiles to produce rocket fuel — will increasingly be incorporated into the Base phase.

In addition, with the experience gained from operating in the lunar environment, the base may be used as a test-bed for developing and/or checking out the many technologies and hardware that will be needed for Mars. While Mars has a slight atmosphere, seasons, very different kinds of dust, and gravity twice that of the Moon (although still only about one-third that of Earth), conditions on the Moon provide a much more rigorous environment for thorough testing. Even entire modules intended for Mars could be field-tested on the Moon. It is a good test site, since the Moon is close enough to Earth for easier and faster resupply, and any rescue operations would be much faster than for Mars.

Commercial Functions. Commercial uses of the lunar base will gradually increase. As the technology improves and the risk from innovation uncertainty is substantially reduced, risks and potential profits of investment in the lunar infrastructure can be better evaluated. At that point, it is likely that investments in lunar enterprises will be more substantial. Possible commercial opportunities include, e.g:

This milestone can be considered to be achieved when the multi-purpose base has been continuously occupied for at least a decade or when a true lunar settlement is established.